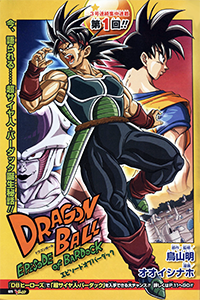 The new story begins where the original TV special ended: Bardock’s insubordinate attack on Freeza. Bardock calls for Freeza to come out, who responds by stating that he should be referred to as “Freeza-sama“, and asking what he wants. Bardock screams that they are allies, but Dodoria and Zarbon laugh this off; the Saiyans were just being used all along. Freeza states that the race has become an eyesore and must be eradicated… along with their entire Planet Vegeta. As Freeza’s blast engulfs both Bardock and the planet, he thinks to himself how annoying it would be on the off-chance that the “Super Saiyan” from the ridiculous legend ever actually appeared…

Bardock awakens to find himself in a strange place, convinced that he was caught in the explosion of Planet Vegeta. Where is he? The landscape and the color of the sky remind him of Planet Vegeta, but something is different. Two creatures, Ipana and Beri, approach Bardock (who has never seen this race before in his life). Ipana is the village doctor, and along with his shy son, heal Bardock a bit with their village’s secret medicine. Whatever the liquid is, it seems to be healing Bardock, who recognizes it as somewhat like the liquid from their own medical machines. Ipana says that with injuries as harsh as Bardock’s, it will likely take him half a month to fully recover. Ipana found him collapsed on the outskirts of town, and dragged him all the way back. Bardock is not from Planet Plant, is he? Much like how Bardock does not recognize Ipana’s race, Ipana is equally puzzled about Bardock. “Planet Plant”… Bardock thinks to himself that this was supposed to have been Planet Vegeta’s original name, but this cannot be the past…! Ipana gives Bardock something to eat, but the noise from a spaceship steals their attention.

An alien named Tobi cannot believe that “Chilled-sama” has his eyes on such a pathetic planet… but regardless, he declares that from here out out, they are the new rulers! Along with Cavira, Tobi notes that Bardock appears different from the others (who thinks to himself that these guys do not look like Freeza’s underlings). Cavira goes to make an example of Bardock but is made quick work of by the brutal Saiyan. Bardock strains himself due to his prior injuries, but still manages to take out Tobi… making him the village’s savior in the process! The mayor thanks him, but Bardock wants nothing to do with them, saying it makes no difference to him whether they live or die. Bardock camps out by himself, still wondering where he is. He was just fighting Freeza, but cannot remember anything after the explosion. Beri sneaks up toward Bardock with some food, but Bardock threatens to kill him if he does not scram. Ultimately, however, Bardock eats the free food.

Ten days after losing contact with Tobi and Cavira, Chilled decides to check up on Planet Plant. One of his henchman states that they have completely lost sight of the two, and have no idea where they might be. Even though the henchman promises to continue searching, Chilled decides to go have a look for himself. It is hard to believe that there might be anyone out there foolish enough to oppose him, but he is starting to look forward to his visit to Planet Plant! Just who is this “Chilled” who looks like Freeza, and will Bardock finally…?! 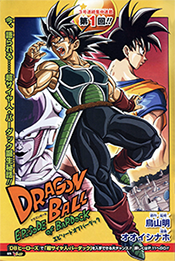 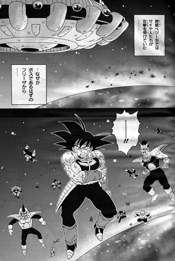 Episode of Bardock
Next Chapter »
Connect With Us
Support Us
Your support for Kanzenshuu is what keeps us going. You can help by donating to us directly, or by shopping online at certain retailers through our affiliate links below. Every bit counts and helps contribute to our server fees and bringing you new site content, reviews, and contest items.