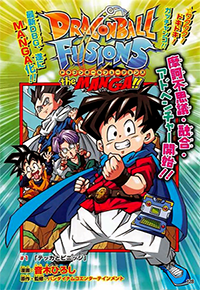 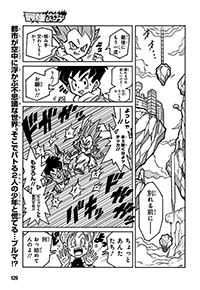 In a strange world with islands in the sky, Tekka and Pinich decide to spar one last time before they part, while Bulma looks on aghast. Flashing back several hours earlier, in a (relatively) normal world, Tekka and Pinich have finished gathering the Dragon Balls (each bringing back one of the last remaining two at the same time). The two wish to Shenlong for the opening of the greatest tournament of all… and find themselves in the strange world full of floating islands. Unsure of what has happened, they arrive in West City looking for answers and enter Capsule Corporation. A small computer invented by Bulma mistakes the pair for Goten and Trunks. Bulma herself appears and explains to them that this world is the “Valley of Space and Time”, created by Shenlong in order to hold the greatest tournament of all: the Jiku-ichi Budōkai (“Strongest in Time and Space Tournament”). The tournament grounds are located far above Karin Tower, but the tournament requires teams of five, and to reach the grounds one must prove strong enough to pass through a series of barriers. Tekka and Pinich decide to part ways and assemble separate teams to enter the tournament, and Bulma gives them each a “Time-Space Radar” (the same type of talking computer seen earlier), which locates powerful warriors throughout various times and worlds.

The story returns to the opening scene, as Tekka and Pinich spar with each other one last time before parting (their fight ends in a draw, as always). After Pinich departs, a sudden explosion rocks a nearby floating island. Goten and Trunks arrive, and tell Bulma they are going off to defeat the bad guys responsible for the explosion. Sensing the pair’s power, Tekka tags along. The bad guys turn out to be none other than Nappa and Raditz. Goten and Trunks fuse into Gotenks and begin pummeling Raditz, and Tekka is amazed at the power of Fusion. However, Nappa attacks Tekka, which distracts Gotenks long enough for Raditz to temporarily blind him with a ki blast. Tekka continues to get beaten to a pulp by Nappa, but when he remembers his promise to battle against Pinich in the tournament, this gives him the strength to prevail. Meanwhile, Gotenks has likewise finally defeated Raditz, and splits back up into Goten and Trunks. The group celebrates their victory, and it seems Tekka’s adventure is off to a fine start… but elsewhere, the defeated Raditz vows that he and Nappa will try Fusion out for themselves.

A final promotional page covers the “create your own fusion contest”, telling kids to think up a warrior mightier than Karoli (a fusion of “Kakarrot” and “Broli”). 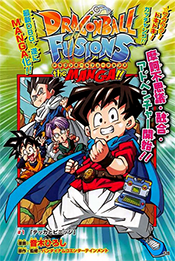 Dragon Ball Fusions the Manga!!
Connect With Us
Support Us
Your support for Kanzenshuu is what keeps us going. You can help by donating to us directly, or by shopping online at certain retailers through our affiliate links below. Every bit counts and helps contribute to our server fees and bringing you new site content, reviews, and contest items.