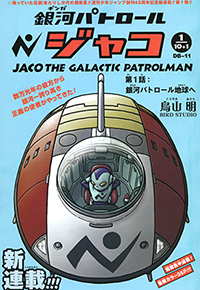 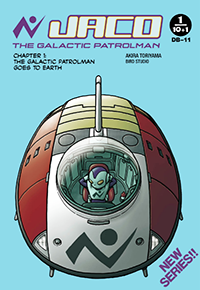 The Galactic Patrolman Goes to Earth

A spaceship seems to accidentally crash into Earth’s moon, bouncing off and spiraling down toward the planet. The narration takes us back to this time on Earth with a small island where an old man lives by himself. The man mutters to himself that he has failed again as he walks away from a spherical contraption with an open door. He wanders off to a gravesite to offer up flowers and a prayer.

The man returns home and turns on the TV as the news reports on “super idol” An Azuki, who will be boarding a rocket to go orbit around the Earth in a few days’ time. As the idol exclaims that it has been a childhood dream to go into space, the old man snaps the TV off in disgust and wanders to his porch for a smoke and a read. He hears a sound and watches as the spaceship crash-lands in the distance, then rushes off to the pier to get a better look.

It is too dark to see anything, and the monster shark is out there, so there is nothing more he can do. The old man sees the fin of the shark, but also sees the spaceship pop out of the water! The spaceship seems to dock at the pier, but a little alien man is actually carrying it from underneath and walks ashore, tossing the ship down on the ground.

The alien questions the old man about what he is doing there, but the old man says that was his question. The alien figures this guy must be an “Earthling”, and he was lucky to land near an island like this. The old man says he was surprised the guy got away from the shark, who can be quite dangerous in the dark of night. The new guy finally explains that he is not just an alien, but a super-elite member of a special group that protects the galaxy: he is a galactic patrolman! The old man does not seem particularly impressed by either the explanation or the accompanying dance and pose, and tells the alien to go away. The alien cannot leave, though, since his spaceship is busted. The old man decides to take a look at it — he is an engineer, after all — and is rightly flabbergasted by the technology. Is this guy really an alien?! He tries to take off what he thought was a mask, but it really was the alien’s face.

Why is the alien here on Earth, and why did he crash-land? The alien explains that he was distracted by a video he was watching. The old man figures he will let the alien stay with him for a bit and he will check the ship out in more detail in the morning, but makes no promises about being able to do anything about it. He offers the alien some stir-fry, but the alien figures the closest thing to his own food would be milk and cheese.

The old man does not have any cheese, but offers the alien some milk. He figures that if the alien knows about that kind of food, he must have done some research on the planet. The alien explains that they have sent scout robots to check out Earth since ancient times, and that one in every hundred-thousand flies is actually a scout robot from the galactic patrol. It was the robots that allowed them to analyze Earth’s languages, as well, which is why the alien can communicate with him; it took four hours for the language data to be input into his head! The old man challenges him, saying that if he could get language input, why not spaceship repair info? The alien mentions he skipped that particular session…

The old man inquires if the aliens have time machines that allow them to travel into the past and the future. The alien explains that controlling time is very dangerous and is actually outlawed, and asks why the old man wants to know. He skirts the issue and begins prepping the guest area. The two finally exchange names. The old man is “Omori”, which makes the alien laugh since it is their native word for a spontaneously-flying booger. The alien’s name is “Jaco”, to which the old man replies that a neighbor used to have a dog with a name like that.

The alien heads off to sleep, but seemingly only for a brief while. He gets up, folds up his guest sheets, and jumps outside into the water to defeat the monster shark. When Omori wakes up, he wonders how long Jaco actually slept for. It was only half an hour; he spent the rest of his time watching TV, reading, and running around singing the galactic patrol theme song. Oh, and he also defeated the monster shark. Omori cannot believe it! Jaco asks for his ship to be repaired now as thanks. Omori says that getting rid of something you do not like is a barbaric way to handle things, but he is grateful…

Jaco mentions the TV report about the idol, and Omori explains they are using her as a way to gather funds for the rocket. Jaco then inquires about a collapsed building. Omori pauses before responding that it is the result of a failed experiment in the research lab where he attempted to create a time machine under the request of the government, who had funded his creation of the machine in secrecy. Omori brought his wife to live with him on the island, and she loved it there even though it was not a particularly convenient location. Sadly, one day an assistant made a mistake managing the high-pressure gas, and there was an explosion. Omori was merely hurt, but many others were killed, including his wife. The survivors abandoned the project and the island, but Omori remained behind to stay with his wife’s grave. Jaco seems to be slightly distracted by a bunch of moving things; Omori says they are just cockroaches.

Jaco figures this is why Omori asked him about time machines. It is a good thing they did not succeed, though, since it is forbidden by intergalactic law. Omori figures it would have probably been used by the government for nefarious purposes, anyway, and that the world is filled with untrustworthy people. He returns to examine the ship, which seems to have issues with just one key component, though he is still not sure if he can fix it.

At this point, Jaco figures that Earth is filled with worthless creatures, just as he was informed. He had actually come to help them, but it sounds like there is no worthwhile reason to do so. There is a spaceship from an evil alien homeworld heading toward the planet and will arrive in three days’ time around 10 a.m. It was Jaco’s duty to intervene and save the Earthlings, but since the old man hates them all, perhaps Jaco should just use his extinction bomb to eliminate them all right away instead of having them battle with the evil alien. All Jaco needs to do is press a single button, and a virus will spread to wipe out all of the humans. Omori pleads with him not to use it, saying that he was exaggerating and that there are good people out there, too.

Jaco decides to stay and examine things for a while before making a final decision… but he might just press the switch if he gets annoyed. Omori says that if he presses the button, there will be no-one to help fix the ship.

Good point. He will at least wait until the spaceship is fixed before he wipes out humanity!

The print edition of this Jump issue in Japan had several “augmented reality” bonus features. When viewed through the camera of a device using the appropriate app, the cover of the magazine would animate, revealing a message of thanks from Son Goku (courtesy of a new illustration from Akira Toriyama), and the title page of each series contained within would reveal a color illustration by the author hovering above it. 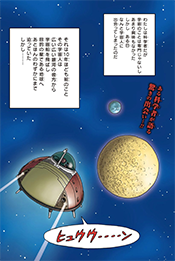 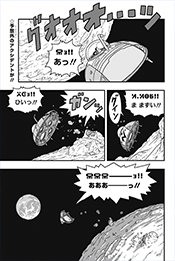 Jaco the Galactic Patrolman
Next Chapter »
Connect With Us
Support Us
Your support for Kanzenshuu is what keeps us going. You can help by donating to us directly, or by shopping online at certain retailers through our affiliate links below. Every bit counts and helps contribute to our server fees and bringing you new site content, reviews, and contest items.