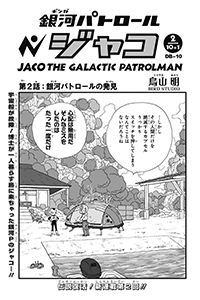 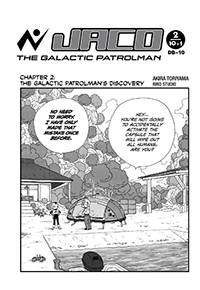 Omori wonders if Jaco will accidentally activate his capsule and wipe out all human beings on Earth, but Jaco states that there is no need to worry, and that he has only made that mistake once before. His superiors were really upset with him.

Jaco still really wants Omori to repair the spaceship for him, so he lifts it up and brings it over underneath an overhang. Omori is impressed with Jaco, who responds that he is the third member — when it comes to height — of the entire intergalactic patrol lineup! Omori wonders how they patrol the galaxy with only 38 total members, but Jaco explains there are not many planets with intelligent life on them. Jaco then notices that something is approaching: a ship with four humans on it. Omori thinks it would be troublesome if anyone arrived and discovered Jaco there, but as he goes to look around, Jaco has already gotten himself far away on a cliff to watch.

The visitors arrive with the man in front introducing himself as Katayude with the government police. The island, which does still belong to the government, is going to be turned into a resort facility for politicians in the future, and Omori is technically living here illegally. Omori must clear out within one week’s time. It does not matter what contributions Omori has made to the government in the past, that he has maintained the island up till now, or even that his wife’s grave is here. The visitors leave, and Omori is left to himself.

On the ship, Katayude asks a colleague if Omori was the only one supposedly there on the island. He takes out a telescope and spies a strange figure up on a cliff.

Jaco returns to Omori and offers his sympathies about not being able to stay on the island. He could hear the conversation all the way up there; the special receiver Jaco has can hear an ant burp more than 100 meters away, after all. Omori wonders if Jaco was worried about him, but Jaco just mentions that he hopes the spaceship can still be repaired in a week’s time.

Jaco decides the guy was being a jerk, so he picks up and tossed a rock across the ocean toward the ship. Jaco turns to Omori again and asks about the strange machine on the island. Omori attempts to lie and say it is just a fuel tank, but Jaco already can tell it was the failed time machine, and that Omori has still been working on it even after the accident. Omori wants to go back in time to save his wife and his assistants who perished.

Jaco reminds Omori that it is against intergalactic law to time travel, and that he would be banished from the planet for doing so. Omori laughs it off and says it does not work anyway. So far the best he can do is stall time for just a brief moment. Jaco says even that is too much, but Omori explains that what actually happens is that it speeds up how just one person experiences time, which makes the rest of the world appear to pause. Jaco figures that is not really time travel after all, and lets Omori off the hook, who himself decides to hurry up and get to work on the spaceship.

Katayude and his colleagues wonder why their ship sank…! 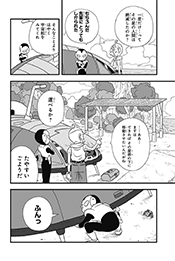