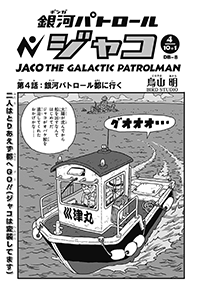 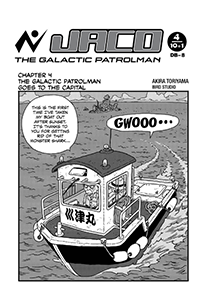 The Galactic Patrolman Goes to the Capital

As they head into the city, Omori remarks to Jaco that it is the first time he has been able to take his boat out after dark thanks to Jaco defeating the sea monster. It will take about half an hour to get there, and once they arrive, Omori asks that Jaco not cause any trouble even with some of the awful people that are there. Jaco says he understands, but Omori presses further and says not to use the extinction bomb if Jaco happens to become irritated.

They arrive, and Jaco is not particularly impressed with the scale of the city. Jaco sees all sorts of crime going on around him, but Omori tells him to keep his cool. This is a pretty bad place for a member of the Galactic Patrol, so Omori wants to just get their shopping done and over with.

A man dressed as a samurai bumps into Jaco and an altercation begins. Omori begs Jaco to keep his temper under control, which Jaco does, despite still demanding an apology and tossing the guy down and screaming at him; that was controlling his temper. A thief on a bike steals a woman’s purse, and Jaco cannot believe what just happened, so he fires a gun blast to stop the thief. Everyone in the area is stunned, but the woman offers Jaco a reward for stopping the thief. It is ¥20,000! All they have to do now is raise another ¥18,980,000 and they can purchase the supplies they need! Jaco thinks protecting people on Earth might be a good job for him as a Galactic Patrolman, and they can use the reward money to put toward their spaceship supplies. Omori does not think that plan is particularly “super elite”.

Omori thinks they will just get into more trouble the longer they hang out, so they should just get their shopping done now. As Omori wraps up his transaction, Jaco nonchalantly states to a child and a dog that they are, in fact, indeed a child and a dog. Omori picked up some peanuts, a favorite food of his. Jaco offers to carry it, but begins laughing because “peanut” is the word on his planet that specifically means the left buttock of a woman. Omori, figuring that this means there are both men and women on Jaco’s planet, asks if he has a girlfriend. Jaco says someone of his status does not have time for something like that, and with a backdrop of the pop idol’s image and song, Jaco refuses to answer Omori’s question of if he’s just not popular with the ladies. 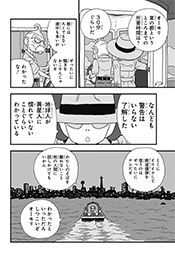