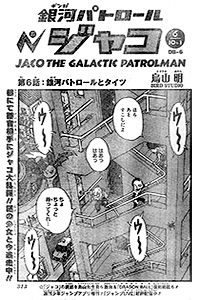 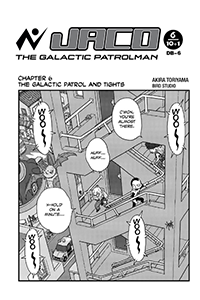 The Galactic Patrolman and Tights

Jaco, Omori, and the girl run up the building to make their escape. After a bit of huffing and puffing, the gang all thank each other for helping out. Omori wishes Jaco did not attack the police like that, to which Jaco responds he should have done more research on Earth police; the girl wonders what he means by that. The girl — named Tights — eventually figures out that Jaco is an alien. From her name, Omori gathers that Tights is from the western region; indeed, she is from West City. Jaco is not just any alien, though: he is a galactic patrolman! The police see Jaco doing his wacky pose atop the building, so the chase is on again. With no other option, Jaco grabs both Omori and Tights and takes flight into the air!

The trio land at the pier thanks to Jaco’s emergency technique, and Tights convinces them to let her tag along. The group hops in the boat and Tights learns a little bit more about them (Omori is human, and Jaco is a galactic patrolman who protects the peace of the galaxy). Tights learns they need ¥19 million worth of sky gold and is in disbelief over the amount. They arrive back at the island, and Omori makes it clear that he never actually invited Tights to come along. Omori apologizes to Jaco for not being able to bring back the cheese and milk, but Tights offers to go pick it up tomorrow since the police never actually saw her face.

A news report mentions the attack on the police that evening. Jaco cannot believe they are referring to him as “Mask Man” and how they pegged him as shorter than he really is. As Tights continues to pester Omori inside, Jaco sits on the steps outside, upset over these developments! 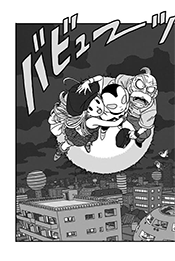