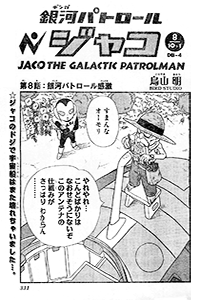 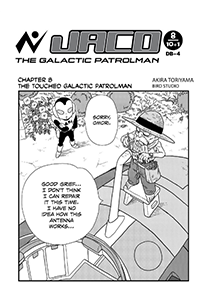 Unfortunately for Jaco, Omori has absolutely no idea how to fix the spaceship’s antenna. As Tights invites them in for dinner, the TV news broadcast reveals a sketch of the “Mask Man”. Everyone but Jaco finds it hilarious. Meanwhile, Katayude is watching the broadcast and seems to recognize the criminal. As a government agent who knows exactly where this man is and who he is with, it is up to him to catch this man!

Tights asks Omori how long it would take to get to Kiwi Island from here. Omori wonders if she wants to go see the rocket launch, but no: she will be on that rocket launch! Tights is apparently a body-double for the idol An Azuki, who they cannot seriously endanger by putting on that rocket ship in case something goes wrong. If something were to happen, they would trot her out later and say it was a miraculous survival, and her popularity would skyrocket even more. Omori cautions Tights not to get on the ship due to its risk, but Tights responds she was already paid and already spent the money (on their sky gold, no less). Jaco is touched by Tights’ selfless acts, and promises not to kill all of humanity. Tights makes them promise not to tell anyone about the secret, though. Tights always wanted to be a science-fiction novelist, and when approached to ride the rocket, could not turn down the offer.

Tights borrows the boat and takes off with best wishes from Omori and Jaco while the pop idol’s song plays on the radio. Tights arrives two days late, but she chocks it up to being attacked by Godzilla. As the producers urge Tights to get into her outfit, she mentions how An Azuki seems more flat-chested than she does on TV.

Omori wonders if there is anywhere Jaco can reach with what fuel he has, but Jaco says he probably could not since they are on the far edge of the galaxy. It sounds like “An Azuki” is about to board the ship, so Jaco and Omori run in to watch Tights on TV. In her spacesuit, Tights waves to the camera. Jaco notices that a boat is arriving outside; it is that government man from before along with a few others holding weapons. Omori yells for Jaco to hide. If they are armed, that means they know that the “Mask Man” is on the island! 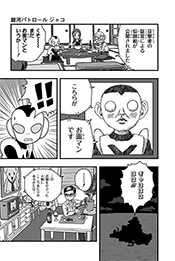