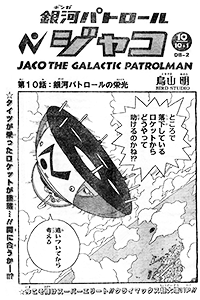 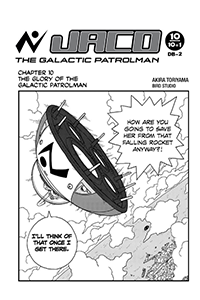 The Glory of The Galactic Patrolman

Omori asks how they are going to save Tights and the crashing rocket, but Jaco will figure it out when he gets there. Even under this duress, Omori cannot help but be impressed with the technology of the galactic patrol inside their ship. Time is about to start flowing again very soon, and so they burst in alongside the rocket. Jaco tells Omori to fly the ship while he jumps across and saves Tights. He places a communicator on Omori’s ear so they can talk throughout the process. Jaco fires his blaster and makes his way in, while Katayude and the others watch via binoculars below.

Tights knew Jaco would come rescue her! Jaco is kind enough to rescue the captain, as well, grabbing them both and jumping back across to his own spaceship. Everyone is safe, but the rocket is still filled with fuel and heading down to crash into East City! Jaco does not seem to care about the city… but he is a super elite, right?! Omori massages Jaco’s ego just enough to get him to leap into action. Jaco jumps down again, ricochets off a building with a kick, and opens fire on the rocket with his blaster, causing it to explode in mid-air above the city.

People below, Katayude included, are confused and shocked over the explosion. Omori lands the spaceship, and Tights jumps out to hug and thank Jaco. Two men below realize that the girl is not actually An Azuki, and then recognize Jaco as the “Mask Man” from the news… who still has a problem with that name, and instead introduces himself as a super elite.

Omori pilots the ship back to the island, but Jaco is content to stand atop it outside; Tights figures he is obsessed with looking cool. Upon their landing, Katayude and his associates stand at attention and apologize. Katayude notices that the captain is not with them, but Omori reassures him, saying they dropped him off at the capital along the way. Katayude also realizes this girl is not actually An Azuki, so Omori explains the whole situation with Tights being a body double. Katayude then promises not to tell anyone that Mr. Super Elite is actually a robot. As Jaco, Omori, and Tights stare at him in disbelief, Katayude explains that there are folks out there that would use such technology for nefarious purposes. Jaco tries to protest, but Omori and Tights cover his mouth and say how perceptive Katayude is. Katayude, continuing with his acts of kindness, tells Omori that he can stay on the island; it was bad enough that the government wanted to put an idol up on a dangerous mission like that, never mind a body double of hers! He will come up with some excuse for Omori to stay. As Katayude and his associates leave, he promises to have the sketch redrawn, as well. Jaco is still upset over being called a robot, and Tights wishes they had asked for money, but Omori is content with how things worked out.

The TV news says there is no explanation for how those on the spaceship survived such an accident, nor what the mysterious flying object over the city was. Tights reflects on everything, wishing she at least got to see Earth from space, so Jaco proposes that he take her up in the spaceship after dinner. Tights worries about using what little fuel they have for something like that, but Jaco reassures her that it will barely take anything at all to do such a short trip. Omori wants in on the action, too! Jaco warns them not to open the top of the ship while in space, since they will die. Tights wonders how stupid Jaco thinks she is; she graduated West University last year at only sixteen years old, after all! Jaco says that Omori was right, and there are indeed some good Earthlings out there. He will refrain from using the extinction bomb for quite some time!

The TV broadcast goes on to say that all of the charges against “Mask Man” have been dropped, he has been instead re-named as “Mr. Super Elite”, and a new sketch has been released, even though he was innocent! The new sketch has a flattened oval for a head with giant, circular eyes.

Up in the spaceship above Earth, Tights promises to send a photo next time, while Jaco mutters to himself that all Earthlings must die…! 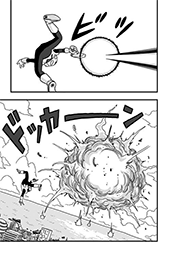