Revival of “F” – Chapter One 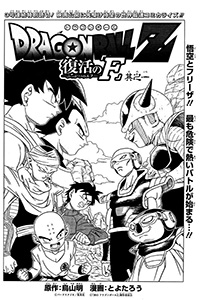 The scene opens on a flashback to Namek, as Goku delivers his “I am the Super Saiyan” speech. Mecha Freeza winces in indignation and disgust. The scene changes to Trunks, who declares that Freeza has made a miscalculation… because there is another Super Saiyan standing in front of him. Freeza mutters “Super Saiyan” to himself, as he recalls being first rent in twain on Namek, then being sliced, diced, and incinerated on Earth.

Mecha Freeza awakens with a start, a look of fear quickly replaced by an expression of annoyance as he finds himself in Hell, in a pod suspended from a tree. All around him, cute critters make an incessant, infernal racket.

The scene shifts to outer space, where on one of Freeza’s ships, Sorbet receives a report that the rebellion by the native inhabitants of Planet 448 is too fierce to contain. He orders reinforcements, but is told that other forces are already occupied with fights on other planets, so only a few can be sent. Cursing through gritted teeth, he orders a retreat.

Sorbet stomps away and plops down into the commanders chair. He activates his scouter, asking if any other planets with Namekian survivors have been found. However, none have, in spite of their many spy cameras. In that case, says Sorbet, they’ll just have to go to Earth, after all. He orders Tagoma, who is standing nearby, to ready a ship for two: the two of them will be going together. Tagoma is surprised that Sorbet himself will be going. “Of course I am,” Sorbet retorts, “because Lord Freeza will be coming back to life!”

On Earth, Gohan and Videl are showing off a baby Pan to Piccolo, when suddenly the sky goes dark; Piccolo immediately surmises that Shenlong has been summoned. Elsewhere, Tenshinhan and Chiaotzu pause their farmwork, and Kuririn stops in the middle of writing up a punk on a motorcycle to wonder if Pilaf & co. are up to something.

Shenlong has indeed been summoned, and before him stand Sorbet, Tagoma, and the Pilaf trio (who are still children). Shenlong tells them to state their desire, for he will grant any wish. Pilaf invites Sorbet to do so, while Mai (under her breath) questions the wisdom of letting them have a wish with the Dragon Balls they worked so hard to collect. Pilaf shoots back that they have no choice, and to keep quiet.

Sorbet shouts for the Dragon to resurrect Lord Freeza, but Shenlong remains silent. Sorbet asks what’s wrong: he can grant any wish, right? The Dragon says that it is indeed possible, but that person’s mortal body was cut into pieces quite a long time ago, and cannot be brought back to life. It would be meaningless for his soul to return to it as-is.

Sorbet is briefly troubled by this news, but Tagoma suggests the recovery chambers currently used by their forces might be able to revive him. His concerns allayed, Sorbet shouts, “Hey! I don’t care if he’s in pieces, just revive him already!” The Dragon is displeased with his high-and-mighty demeanor, but since he has no choice, he does as he is bidden. Shenlong’s eyes glow….

Freeza suddenly vanishes from his pod in Hell… and reappears in chunks, which land before Sorbet. Where am I…? wonders Freeza, as Piccolo and Gohan sense a familiar Ki. Freeza briefly tries to pull himself together, before falling to pieces once more. These are… the senses of a living body… If nothing else, this isn’t Hell. The Pilaf trio recoil at the pieces of Freeza, then go into full-on freakout-mode when one of his eyes looks at them. Sorbet picks up a piece, and sneers. “Just as expected of Lord Freeza… with this life-force and the technology we have now, we can absolutely regenerate him!”

Their ship takes off, leaving Pilaf, Shuu and Mai in the dust. With the pieces of Freeza twitching in some sort of containment vessel in back, Tagoma airs his concerns about bringing back Freeza: he was a dictator, after all. Sorbet scoffs, and says they had no choice: as soon as Lord Freeza and the others were defeated, both the inner and outer ranks of his forces fell into a shambles. They have no choice but to let Freeza reorganize them. Tagoma wonders if he really possesses that sort of ability, prompting a shocked Sorbet to tell him to watch what he says. “That is the evil overlord Freeza! If his regeneration goes well, it will be all right! And besides, there’s no need to go pick an unnecessary fight against that Saiyan. After all, our goal is simply the rebuilding of his forces….” With that, the ship disappears into space.

Back on Earth, Gohan senses the Ki suddenly vanish, and wonders what that was all about. Piccolo has a bad feeling about this….

Off in space, in the confines of his recovery chamber, Freeza is dreaming… reliving a nightmare. I am… the mightiest in the universe…. That’s why… that’s why you have to… die by my hands…!!! Sorbet, Tagoma, and other soldiers are watching over Freeza’s restless slumber. Mine…

In dreams, Freeza relives his last moments on Namek, and his last desperate blast against a Super Saiyan Goku. With a shout of “You fool!!!” Freeza is obliterated once more…

Suddenly, Freeza awakens with a look of rage. The ship trembles, and all scouters break except for Tagoma’s and Sorbet’s. The glass of Freeza’s recovery chamber cracks, then shatters, spraying fluid on those present. Out steps Freeza in his first form, looking thoroughly unamused. He cracks his neck and sighs, surveying the room. Hesitantly, Sorbet addresses him: “W- welcome back, Lord Freeza!” Freeza eyes him. “Hm? And you are…?” Sorbet introduces himself as a former staff officer in the Third Sector. Freeza at last seems to recognize him, saying he does recall having seen him, just a bit. However, he seems amused that Sorbet is leading his forces in his place. But at any rate, he appears to have come back to life…! Sorbet explains that they have done so with a combination of the Dragon Balls and the latest-type recovery chamber; Freeza recognizes these as the mysterious orbs the Namekians had.

Tagoma interjects to say that he also had a hand in reviving Freeza, and Sorbet hastily explains that Tagoma is an excellent warrior, on-par with even the late Zarbon and Dodoria. Freeza congratulates him offhandedly, then points a finger… and kills one of his soldiers with a single energy blast. “My skills really have lapsed a bit,” he grouses, as the others look on in shock. “My revenge might take a bit of time.” Sorbet is taken aback. “R- revenge?”

“Of course,” says Freeza. “After all, I will not be satisfied until I have obliterated those two Super Saiyans who did this to me.” Tagoma protests: “This is merely a suggestion, but wouldn’t it be more prudent to simply ignore them? More importantly, like before…” At this, Freeza fires a second energy blast straight at Tagoma’s chest, sending him flying through the viewport and causing the compartment to rapidly depressurize. A second soldier is sucked into space while another hangs on to the hull for dear life, as Sorbet hastily orders the shields raised.

As the other soldiers recover their bearings and help one of their own back inside, Freeza lectures them about how his forces have become quite weak while he was away. How can they, Freeza’s mighty forces in the universe, do their work while trembling in fear of a paltry few Saiyans? Sorbet tries to warn him off, saying that the Saiyan named Son Goku became even more powerful than that. This, however, amuses Freeza, who claims it was entirely expected: “I merely have to become stronger than he is.” Sorbet goes on to say that he defeated even Majin Boo… though after that, they have no data. “Majin Boo…” muses Freeza, “Papa told me never to lay a hand on only two people: God of Destruction Beerus, and Majin Boo. That Majin Boo, eh?…” Sorbet nervously agrees. Freeza is not happy: “…That is beyond what I had imagined.”

“However,” smirks the overlord, “isn’t it interesting?” Sorbet asks what he means. “Since I was a born genius, I have never done such a thing as a training, nor have I ever had any need.” At this, he ascends into the air. “I wonder what will happen… if I train, and draw out all my latent potential…”

“You mean… you’ll be able to get stronger?” asks Sorbet hesitantly. “Well, of course,” replies Freeza, “according to my predictions, I will…. If I train in earnest for four months… I should be able to snuff out even that Saiyan in the blink of an eye…” Sorbet and the others are astounded: “What… that much stronger…?” Freeza just grins an evil grin.

The majority of the Dragon Ball series was drawn in black and white, but chapters were occasionally published with color pages. Thus far, the manga adaptation of Revival of ‘F’ has been published entirely in black-and-white. 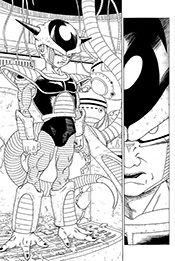 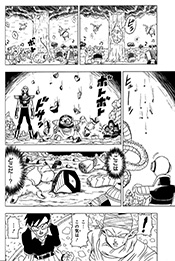 Movie Adaptations
Connect With Us
Support Us
Your support for Kanzenshuu is what keeps us going. You can help by donating to us directly, or by shopping online at certain retailers through our affiliate links below. Every bit counts and helps contribute to our server fees and bringing you new site content, reviews, and contest items.