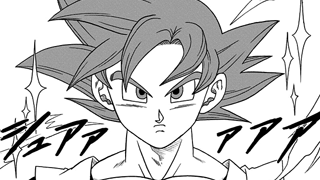 Following the battle with Majin Boo, our heroes settle into more normal lives, with Goku occupying his days farming, Gohan enjoying his recent marriage to Videl, and Vegeta spending quality time with his family at a resort getaway. All seems peaceful, until numerous planets begin disappearing and the Kaiōshin soon realize that Beerus, the God of Destruction, has awoken from his slumber!

In search of “Super Saiyan God”, a being he foresaw in a prophetic dream, Beerus and his attendant Whis travel to North Kaiō’s planet in search of Son Goku, the Saiyan who defeated Freeza. Goku, who is training on Kaiō’s planet, ignores Kaiō’s advice and challenges Beerus to test his true strength. After a brief and completely one-sided battle leaves Goku unconscious, Beerus heads to Earth to find out what Vegeta knows about Super Saiyan God.

On Earth, Bulma is celebrating her birthday on a Capsule Corp cruise liner, but the festivities have been interrupted by the arrival of two mysterious guests. After quickly dispatching Gohan, Majin Boo, and Gotenks, the uninvited guest sets his eyes on Vegeta, who realizes who he is — the God of Destruction, Beerus! As Vegeta recalls Beerus coming to Planet Vegeta when he was young, Bulma suddenly slaps Beerus in the face, scolding him for ruining her birthday party. Beerus in return slaps her across the face. Seeing this, Vegeta loses control and voraciously attacks Beerus.

Meanwhile, the Elder Kaiōshin notices another planet has just disappeared, despite the fact that they are watching Beerus on Earth at that very moment. The two Kaiōshin check the area with their crystal ball and come across another mysterious duo in space. As the Kaiōshin watch, the duo turn around glaring straight back through the crystal ball at the Kaiōshin. “Champa” says hello to the “Kaiōshin of Universe 7” before appearing on their planet and grilling them on how much they overheard. The Kaiōshin pretend to have not heard anything at all; Champa does not seem fully convinced, but they leave anyway.

Just as Vegeta concedes defeat to Beerus, who now intends on destroying Earth, Goku arrives. He asks Beerus to wait a little longer, as he has an idea about finding “Super Saiyan God” — the Dragon Balls. After learning the summoning ritual from Shenlong, the remaining Saiyans awaken the power of “Super Saiyan God” in Goku. With Goku now a Super Saiyan God, he and Beerus finally begin their rematch high above the cruise liner. As Goku becomes more acquainted with his newfound power, Beerus begins taking the match seriously, and soon finds Goku to be formidable opponent. With the battle waging on, Whis eventually remarks that they should perhaps consider the match done. Beerus decides he will leave and not destroy the Earth, for now, so long as Goku pushes himself even more. Furthermore, he should know that Beerus is the God of Destruction of this universe, the seventh of twelve in total. Beerus and Whis depart, leaving a smiling Goku behind.