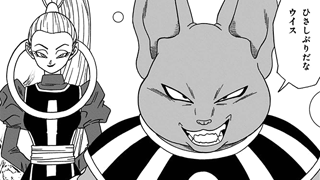 Goku and Vegeta are training under Whis’ guidance on Beerus’ planet when Champa and Vados suddenly arrive. Goku and Vegeta wonder who they are, noting that they look a lot like Beerus and Whis. Vados explains that he is Beerus’ twin brother, the God of Destruction of Universe 6, and that she and Whis are actually siblings. With that out of the way, Champa calls for Whis to retrieve Beerus. The two Gods of Destruction swap new foods from their respective universes. However, Champa finds the ramen that Beerus offers him so delicious that he quickly asks his attendant, Vados, to find the corresponding “Earth” in Universe 6. Whis explains to Goku and Vegeta that Champa is from Universe 6, and that it is actually the twin to their Universe 7: each pair whose numbers add up to 13.

Beerus begins gloating that this means only his universe contains Earthlings capable of making such tasty food. Annoyed, Champa proposes a battle, and if he wins then he and Beerus will swap Earths using the Super Dragon Balls he has been collecting. So far Champa has six of the seven, but he will turn them over to Beerus if he wins the battle. With that it is decided; they will hold a team battle between five warriors selected from each universe, with Universe 7’s Earth being the ultimate prize!

Having decided their teams, the two universes gather on the “Nameless Planet” which floats in neutral space. Representing Universe 7 is Son Goku, Vegeta, Piccolo, Majin Boo, and “the strongest warrior Beerus has ever met”, Monaka, from Planet Wagashi. Champa’s five-member Universe 6 team consists of Botamo, Frost, Autto Magetta, Cabba, and Hit. As the tournament unfolds, Goku finds himself facing the last remaining Universe 6 warrior, Hit, an infamous assassin with a deadly time-skip technique. Goku soon adapts to Hit’s time-skip, forcing him to take their match seriously and the two are genuinely excited to be fighting each other.

The two power up and continue their match to a standstill. Goku remarks that, as an assassin, Hit must have certain killing techniques he is unable to use in this tournament due to its rule against killing, so Hit must in actuality be even stronger than this. With that, Goku hops out of the ring and concedes the match. Beerus is absolutely livid, as he knows that Monaka is actually just a regular weakling that he brought along to motivate Vegeta and Goku. Terrified, Monaka makes his way down to the arena. As Beerus panics, Monaka runs in with twirling arms, only to land a wet thud of a punch against Hit’s knee. Hit suddenly falls backward out of the ring, leaving Monaka as the winner!

With the tournament over and Universe 7 the victor, Champa hands over the Super Dragon Balls, with the nameless planet itself being the seventh and final ball. Beerus has Whis make a wish to the Super Shenlong, but refuses to share what it was. Back in Champa’s cube, Vados notes that the humans on their Earth have suddenly been resurrected, and they are already creating delicious food. Meanwhile, Goku wants to have a battle with Monaka, but Beerus absolutely refuses to allow this!