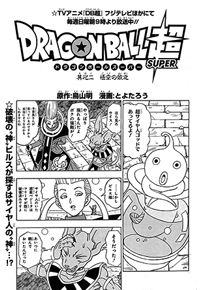 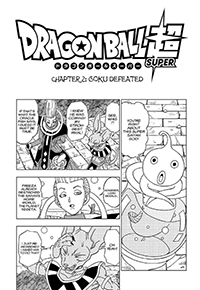 Beerus consults with the Oracle Fish, who says he will face off with the Super Saiyan God, and Beerus gloats to Whis that he was indeed right about the appearance of a worthy opponent. Whis admits that if the Oracle Fish says it to be true, then it must be, but he reminds Beerus that Freeza has already destroyed the Saiyan home world, Planet Vegeta. Beerus forgot about that, recalling that he had asked Freeza to do so. Looking into his staff, Whis informs Beerus that the few remaining Saiyans now reside on Planet Earth. Beerus remembers Earth; it is the planet where he had wiped out all of those rude dinosaurs. Whis interjects that Son Goku, the Saiyan who defeated Freeza, is currently on North Kaiō’s planet. “He defeated Freeza?!” Whis confirms this, and Beerus says they must travel there at once.

Goku is pulling a large block around on North Kaiō’s planet and is thankful for the money from Mr. Satan so he could come here to train. Kaiō suddenly yells out in fear, and Goku asks if he wet his pants again. Kaiō is upset that Goku would even ask such a thing, but admits he may do just that since Beerus is coming here. Goku is confused. “Beerus? What’s that?” Kaiō frantically explains that he is the God of Destruction, the most powerful god of them all, which only seems to excite Goku. He wonders if he can fight this Beerus, but Kaiō vehemently objects, saying Goku is absolutely no match for him and emphasizes that they do not want to get on his bad side; he is quite fickle. Beerus thinks a fight is a great idea, as Kaiō turns to find Beerus and Whis standing behind him.

Kaiō tries to apologize for Goku’s rudeness, but Goku is too elated about fighting Beerus and turns Super Saiyan. Saying he will not hold back, Goku rushes at Beerus, who easily dodges all of Goku’s attacks. As Goku throws more punches, Beerus comments that his hair is no longer black like typical Saiyan hair, and Whis notes he changed into a Super Saiyan, a technique these Saiyans have been using recently. Goku smirks and wonders how he will handle Super Saiyan 2. Transforming again, he reengages Beerus, who admits that he now understands just how a Saiyan was able to defeat Freeza… but he has seen enough. Goku says he should not underestimate him just yet, and further transforms up to Super Saiyan 3. As Kaiō and Bubbles run to hide, Beerus thinks that the transformation is okay, but he is still not particularly impressed.

As Kaiōshin and Elder Kaiōshin watch the battle from afar, elsewhere in the universe, another duo has also taken note that Beerus is now awake. The cat-like being is glad that Beerus is engaged in battle, as there is a good chance he can go unnoticed as he makes his move.

Back on Kaiō’s planet, Goku is struggling to even land a punch on Beerus. He pulls back and throws another punch with all his might, but Beerus merely jumps out of the way; Goku inadvertently blows a hole right through Kaiō’s small planet. Goku is mad that Beerus will not even attack him, and so Beerus appears in front of Goku, sending him flying with a mere flick of his finger. Beerus has had enough, telling Goku to just get it over with and transform into a Super Saiyan God already. Goku does not know anything of a “Super Saiyan God” and says this is already his final transformation. Beerus is frustrated to hear this, and decides to end things himself. He quickly appears behind Goku and knocks him out with a swift chop to the neck. With that done, Beerus and Whis depart to Earth to question the other Saiyans.

As the two approach Earth, the other cat-like being wonders if they have been noticed yet. His attendant notes that Beerus is currently headed off somewhere else, so it appears they have not noticed them yet. “Perfect…” 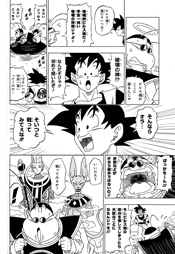 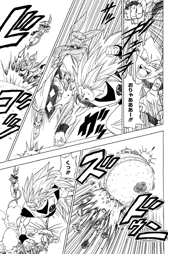 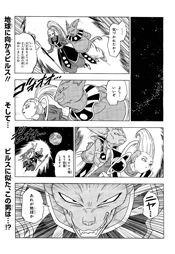