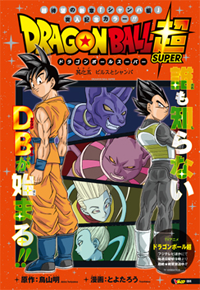 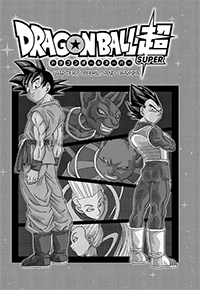 Goku and Vegeta are sparring on Beerus’ planet. Goku wants to fight stronger guys; Vegeta claims to be stronger, so Goku must defeat him first! The two trade a few attacks, but Vegeta is tricked into punching afterimages. Just as Goku closes in, Vegeta transforms and Whis comments on his blue hair. As Goku is knocked back from an attack, he whines that “Super Saiyan God Super Saiyan” was supposed to be off-limits for this match; if Vegeta is going to transform, so will he! The two debate over their relative strength, but Goku bites his tongue rattling off the long name again. Whis suggests “Super Saiyan Blue” as a new name, but also remarks that the transformation was not allowed and that the two appear to be getting carried away after having defeated Golden Freeza.

The narrator explains that a little while before these events, Freeza had returned to terrorize Earth. However, after meeting Beerus and Whis, the two Saiyans received training under Whis and managed to evolve into “Super Saiyan Blue”, a form surpassing even Super Saiyan God. With this, they were able to defeat Freeza!

For disobeying orders, Whis forces giant spacesuit-esque outfits on both Goku and Vegeta. As the two complain, Champa and his attendant make a surprise appearance. Vegeta remarks that one of them resembles Beerus; Goku notes that one looks like a female Whis, and that the other one looks like a fat Beerus. Champa calls for Whis to retrieve Beerus, who is resting at the moment. The attendant makes note of Goku’s rude comment, explaining that Champa is Beerus’ twin brother and is the God of Destruction for Universe 6. Goku wonders who the stronger of the two is, but the attendant — looking at Champa’s stomach — wonders why this is even a question. Additionally, both attendants are actually siblings, though Champa’s attendant is the stronger of the two. Whis objects to this, noting that it has been 1,000 years since his sister trained him.

Beerus finally arrives, and Champa challenges him to a showdown… of food! Champa introduces a boiled Don-Don bird egg, while Beerus provides a cup of noodles. Champa is more impressed than he otherwise would like to be, and inquires about the food’s origin. Beerus explains that “Earth” is filled with even more tasty food. Champa asks his attendant, Vados, to find the corresponding “Earth” in Universe 6. Whis explains to Goku and Vegeta that Champa came from Universe 6, and that it is actually the twin to their Universe 7: each pair whose numerical total adds up to 13 (e.g., 1 & 12, 2 & 11, as well as 6 & 7). Goku fails to understand how this all works.

Vados is able to track down an Earth in Universe 6, but unfortunately there was an “idiotic war” there in the past and its own human race was wiped out. Beerus laughs, since this means they cannot get any of their own tasty food there. Goku is not entirely surprised; Vegeta tried to destroy their own Earth, after all!

Champa decides to hold a contest with the ultimate prize being Universe 7’s Earth. The “Universe 6 and 7 God of Destruction Invitational Tournament” will see five-person teams battle each other until only one of the opposing team’s final competitors is still standing!

Goku, needless to say, is excited…! 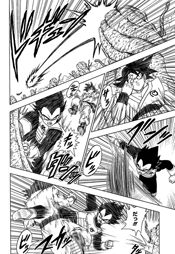 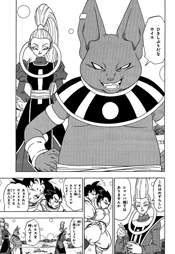 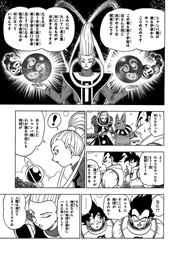