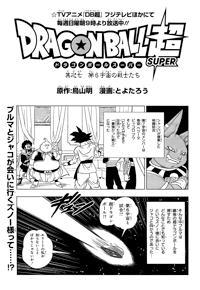 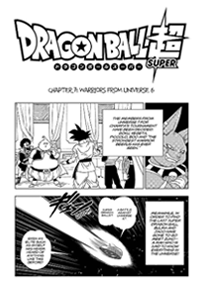 The narrator recaps that Beerus’ Universe 7 team has been decided: Son Goku, Vegeta, Piccolo, Boo, and “the strongest warrior Beerus ever met”. Meanwhile, in order to find the final Super Dragon Ball, Bulma heads off with Jaco to meet the supposedly all-knowing “Zuno”…

Jaco proclaims that even as an elite patrolman, he has never heard of any such things like a match against Universe 6 or the Super Dragon Balls before. Jaco asks to tag along to the fight. Bulma says it should be okay, since they are all invited, and suggests Jaco bring along his girlfriend… though it turns out she dumped him.

Having arrived to see Lord Zuno, the two find that Zuno must be presented with a gift in order to receive an audience and have their questions answered. Jaco pecks him on the cheek with a kiss, and is granted one question. To show Bulma just how smart he is, Jaco asks Zuno what Bulma’s bust size is. Zuno (correctly, judging by Bulma’s reaction) answers 83.4 centimeters, though he notes it used to be 87.2 centimeters before they began sagging. Bulma kisses Zuno as well, and though she is a woman and able to request more, her middle-aged status knocks her down to only three total questions. Bulma wastes a question confirming her number of questions, and so quickly recovers by asking to know everything about the Super Dragon Balls. Zuno explains:

The Super Dragon Balls, also known as “Wish Orbs”, are perfect spheres with a diameter of 371,962.2204 kilometers created by the Dragon God Zalama in the 41st year of the Divine Calendar. Universe 6 and Universe 7 together have a total of seven of these light-yellow balls, each of which contains one to seven red starfish marks. These red starfish marks are Zalama’s own original design, which he obtained a patent for during the 42nd year of the Divine Calendar. This design utilizes refraction to ensure that the marks remain starfish-shaped no matter from which angle they are viewed. If you assemble all seven spheres scattered throughout the two universes and intone in the language of the gods the incantation “Come forth, God of Dragons, and grant my wish, peas!” then the God of Dragons will appear and grant any wish, but only one. Once that wish is granted, they will once again scatter throughout the two universes and silently await the time when they shall be gathered up again by someone with an unobtainable dream.

Bulma unfortunately wastes her third question confirming that there are seven balls between the two universes. She will be able to ask more questions in a year’s time. Feeling somewhat defeated, Bulma and Jaco head back to Earth.

Inside the new Room of Spirit and Time, Goku and Vegeta discuss the potential strength of Champa’s Universe 6 team. Goku is excited to meet all five of them, along with the mysterious extra person for their own team that Beerus has selected. As the two argue, they resume their training inside the Room of Spirit and Time for another three days (equaling three years’ worth of time inside the room).

Three days later, friends and family from Earth head to the arena in a special spaceship provided by Whis. Beerus learns that the seven Super Dragon Balls are spread between their two universes, meaning Champa has been sneaking around in Universe 7. Pilaf, Shuu, and Mai wonder what these Super Dragon Balls might be. Goku asks Videl where Gohan is; there was an important academic conference, so he was unable to join them. The group then finally meet the fifth member of their team: Monaka. Vegeta figures he does not look like anything special, which Piccolo takes to mean that they should not underestimate him. Whis explains that Monaka is from Planet Wagashi, and his name means “Grand Ponta”. Though he is quiet and gentle, when it comes right down to it, he is powerful enough to give even Beerus a run for his money. It turns out that “Ponta” means “nipples” and he is called that due to the enormous nipples protruding from his chest. The rest of Earth’s heroes get settled in with Kuririn leading a game of shiritori, while the Galactic King asks Jaco why no-one seems to notice or acknowledge him.

It takes the group 35 minutes to travel from Earth to Beerus’ planet, and then another 2 hours and 10 minutes to reach the “Nameless Planet”, site of the tournament grounds.

Beerus introduces the location while the group gasps at the size of the Super Dragon Balls. Beerus confronts Champa on sneaking around and stealing Super Dragon Balls from his universe, but Champa retorts that since Beerus did not even know about them in the first place, he figured it would not be a problem. Goku greets his Eastern Kaiōshin, noticing that he’s now split back into Kaiōshin and Kibito (courtesy of the Namekians). Goku then greets two Kaiōshin from Universe 6 before he is called by Whis to take part in the written test ahead of the match. As the Universe 6 Kaiōshin asks the Universe 7 Kaiōshin what the story is with Goku, the two Saiyan figures catch their first glimpse at Champa’s five-member Universe 6 team, including one guy who looks suspiciously like Freeza…! 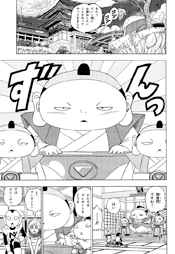 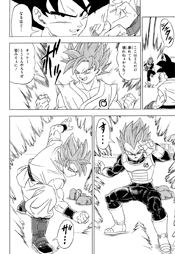 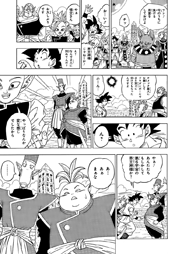