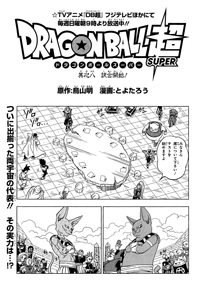 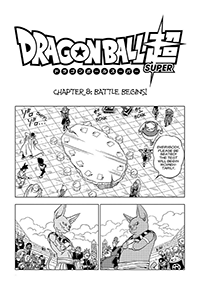 Vados asks the competitors to please take their seats. Goku remarks about the Freeza-esque fighter, though Piccolo notes he is a bit different and does not feel evil. Goku also wonders about the robot-looking guy.

One of the Universe 6 competitors rushes over to Goku and Vegeta to ask if they are also Saiyans like him. Vegeta remarks that his outfit resembles that of the Saiyans prior to joining Freeza’s army. The Universe 6 Saiyan notes that he is from Planet Salad, which Vegeta explains was also their Universe 7 Saiyan home world prior to it being destroyed due to infighting amongst the race. They then stole another planet and named it Vegeta, though someone else had conspired to also destroy that one… The Universe 6 Saiyan goes on to explain that his Saiyans no longer have tails, and while they are also a warrior-race, they do not steal planets; instead, they are hired to defeat evil-doers. Vegeta asks if he can visit Planet Salad, and the Universe 6 Saiyan says that he is welcome there. That being said, neither of them will hold back in the ring!

Vados announces that the test will begin. It will consist of ten simple questions to determine whether the entrant has even a tiny amount of intelligence. The time limit is ten minutes, and each entrant will need at least 50 points to pass.

Goku is scolded by Vados for talking aloud as he works through his test questions and answers. When the test is over, Majin Boo is the only one to not pass. Vegeta remarks that Boo was not even able to spell his own name correctly. This brings the Universe 7 team down to only four competitors. Beerus chastises his team and selects Monaka to fight last as he is the strongest. Goku will go first, followed by Piccolo, then Vegeta, and then Monaka. Goku snidely comments that they all should not get angry with him if he defeats the entire other team all on his own. The Universe 6 and 7 Gods of Destruction Selection Martial Arts Competition will now begin!

Following a rousing vocal performance by the tournament announcer, the tournament begins with Goku versus Botamo, the bear-esque being from Universe 6. Goku has trouble dodging and ultimately gets hit. It turns out that Goku ate too much and needs to work it off a bit by running around. Botamo tries to catch up but even misses with a beam blast. Goku effortlessly knocks Botamo back, surprising not just Botamo himself, but also Champa and Vados. Champa mentions that perhaps they miscalculated, but Botamo has not yet shown what he is truly capable of…! 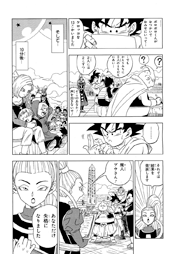 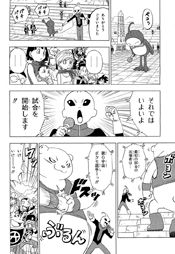 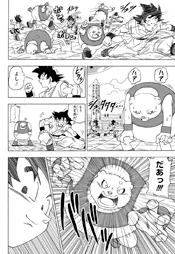