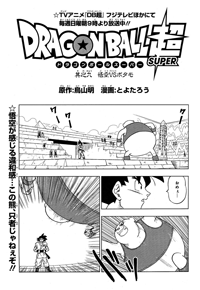 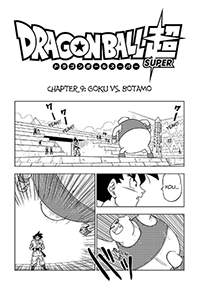 Botamo rushes back in, but Goku manages to avoid his punch. Grabbing his opponent by the arm, Goku drags Botamo in and unleashes a flurry of punches all wrapped up with a swift kick. Botamo lands and grins as Goku begins to realize what he is up against. Hoping to make a little progress in the match, Goku fires a Kamehameha, but Botamo flips himself over and neatly lands back in the ring. From the sidelines, the Universe 7 heroes and friends debate whether Goku will be the one to use up all of his stamina first. At this rate, would he even be able to dish out any damage as a Super Saiyan? Vegeta and Piccolo comment that Goku seems to be holding back in hopes of saving his strength for later fights, but he might have to get serious right off the bat.

Goku finally seems to have figured it out! Goku knocks Botamo over with a gentle push and proceeds to drag him forward by the legs. Botamo begins to realize what is happening and tries to fire some blasts at Goku, who simply cocks his head to the side back and forth to dodge. Botamo thinks he sees an opening, but Goku proceeds to grab him from underneath and flip him directly off the side of the ring. After a few dumbstruck moments, everyone cheers: Goku has won the match! Beerus remarks that Goku actually seemed to use his head. As Champa briefs his team on the sidelines, Goku grabs a quick glance at the other team, taking notice of one guy in particular.

Goku will immediately go into the next round: his opponent will be Frost! Tenshinhan and the Kame-Sen’nin comment that he appears to be the Universe 6 version of Freeza, and it will be a troublesome match. To everyone’s surprise, Frost smiles and politely asks that they do their best!

As the match begins, Frost wastes no time and immediately rushes in. The two trade punches, but Goku gets in a solid kick. Frost recovers and, dashing past Goku, grabs him by the leg with his tail. Frost returns the favor with a kick of his own, and the two go back to trading blows. Just as Goku is about to be punched from above, he disappears, leaving Frost to punch the ground. Beerus and Whis block the ensuing rubble, noting that neither are showing their true power. The fight continues for a while longer with another bout of trading blows, disappearing, and repeating.

Goku can tell Frost is measuring him up, but Frost denies this. Goku requests that he go ahead and just transform into his final state; he can tell Frost is watching him and debating transforming up one-by-one to gauge Goku further. Frost is confused, and wonders how Goku knows this. Goku responds that he has already fought someone just like Frost in his own universe. Frost thanks Goku for his advice, and initiates the transformation.

When the smoke clears, the Universe 7 heroes can tell immediately what is going on: this cannot be Frost’s final form. While Goku has never seen this before, some of the others have; Kuririn, Vegeta, and Piccolo all saw this as Freeza’s third form on Namek. Goku seems to be a combination of confused and disappointed. Frost asks if the “him” in the other universe won against Goku, who replies that it is best not to ask. Frost interprets this as Goku having won, and says it will not go that same way with this fight.

As the fight continues, Champa, Vados, and even the Kaiōshin from Universe 6 all seem to agree that Frost is winning. The Elder Kaiōshin from Universe 7 just laughs, wondering aloud if that truly is the case. Frost fires a slew of blasts and assumes he has won, but Goku just hops right back up and thanks him for the warm-up. Goku remarks that Frost is definitely hiding one more transformation, and must still be trying to conserve energy for future fights. Goku transforms into a Super Saiyan, surprising Champa and Frost alike.

Goku rushes in, determined to force Frost to make a definitive move. Frost appears to panic, and as Goku closes the gap, powers-up to his next form… which looks suspiciously similar to Freeza’s final form. 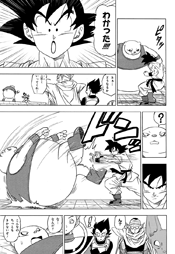 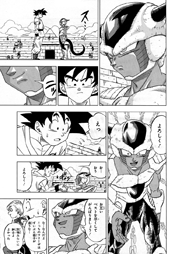 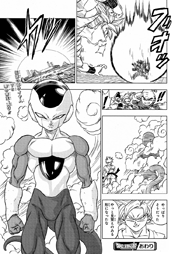