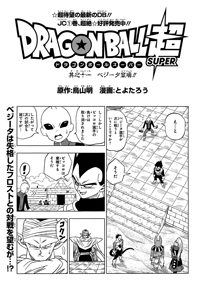 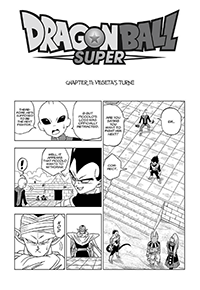 Despite Piccolo’s loss being stricken from the record, Vegeta demands to take the next match. Beerus makes demands of his own, showcasing Goku’s injury from Frost’s illegal weapon, which results in Goku being able to re-enter the tournament. While this will be allowed, Beerus requires that the order of fighters remain Vegeta followed by Goku and ultimately finishing with Monaka.

The fight between Vegeta and Frost begins with an immediate Super Saiyan transformation and barrage of attacks. As a result, Frost is knocked right out of the ring, losing the match. Goku wonders aloud that, with Frost seemingly having been such a nice guy at the beginning, if he might begin to turn more and more into Freeza.

Vegeta’s next opponent will be “Autto Magetta”…! The Universe 7 Kaiōshin ask if he might just be a robot, but the Universe 6 Kaiōshin confirm he is actually of a race called “Metalmen” from Galactic System 66950 and that they probably have similar creatures in their universe. Vegeta begins with a punch, which just seems to hurt his hand. Magetta chops from above, putting Vegeta on the defensive for a while. Not even ki attacks seem to work, so Goku suggests that Vegeta go for a ring-out. Even as a Super Saiyan, Vegeta cannot seem to lift Magetta’s foot off the ground.

With that tactic going nowhere, Vegeta is forced to improvise. He begins chipping away at the arena with a barrage of ki blasts, hoping to destroy any trace of arena ground for Magetta to stand on. Magetta spits a lava-like batch of saliva at Vegeta’s own attacks. Vegeta insults Magetta as he fires back, which seems to take the Metalman off-guard and knocks him to the ring-less ground. Vegeta has won! According to Whis, apparently the Metalmen have rather fragile egos.

Next up is the Saiyan combatant from Universe 6, Cabba! Smirking, Vegeta advises Cabba to come at him with everything he has right from the start of the fight. 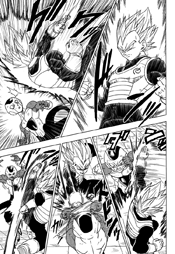 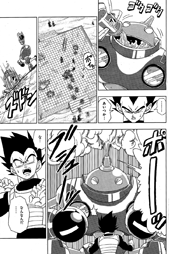 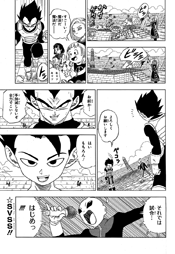