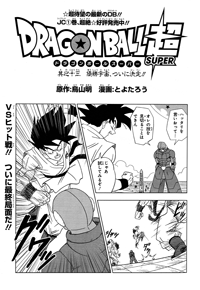 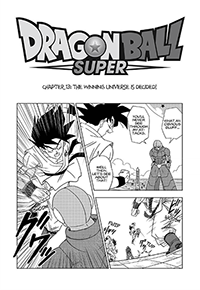 The Winning Universe is Decided at Last!!

Hit calls Goku’s bluff, and in fact is able to knock Goku back before his attacks land. Goku continues to rush back in, and when he randomly tosses a punch out to the side, Hit suddenly appears, only just barely able to dodge. Goku tries this again, and is able to land a solid uppercut. Goku is predicting where Hit will appear a tenth of a second later! Goku reveals his entire analysis to Hit, then transforms up into a Super Saiyan to continue the fight. Hit recommends that Goku use the blue-haired form, but Goku is not ready for that yet.

The battle continues, with both Goku and Hit taking things more seriously. Champa begins to get worried, but Vados assures him that while Hit wastes no stamina using this technique, Goku is forced to stay on his toes with increasing anticipation. Goku has to do something, so he transforms into… Super Saiyan God?! Vegeta comments that, even at this point, Goku is still saving his trump card.

Hit skips time again, but at the last moment Goku is able to shoot him a glare and land a punch to the face. Goku’s assault continues, much to Hit’s dismay. Whis explains that Goku is closing the gap between them, which Vegeta was not able to do because of the strain from using Super Saiyan Blue several times in a row. Realizing the situation he is in, Hit powers-up and explains that he will absolutely skip the full duration, but he will only be able to pull this off once in this state. Goku rushes in with a punch, which Hit is able to skip… but Goku has transformed up to Super Saiyan Blue! Goku lands the attack, and fires a Kamehameha to seemingly knock Hit upward and out of the arena… but Hit has managed to dodge it.

Both Hit and Goku are genuinely excited to be fighting each other. Goku remarks that, as an assassin, Hit must have certain killing techniques he is unable to use in this tournament due to its specific rules, so Hit must in actuality be even stronger than this. With that remark, Goku hops out of the ring.

Beerus (knowing the truth about Monaka) is absolutely livid. Goku and Vegeta comment on each others’ motivations, while a terrified Monaka makes his way down to the arena. As Beerus panics, Monaka runs in with twirling arms, only to land a wet thud of a punch against Hit’s knee. Hit suddenly gets pushed backward out of the ring, leaving Monaka as the winner! Universe 7 takes the tournament!

Champa is too distracted with screaming at Hit for clearly throwing the match to notice what Beerus has to point out: the “Omni-King” — who rules over all twelve universes — has arrived! The King explains that even though Beerus and Champa arranged this on their own, it has been entertaining enough that he would like to see one with competitors from all twelve universes. Brimming with excitement, Goku runs in and extends a hand to the King, who returns the handshake as his attendants look on. As the King leaves, an exasperated Beerus explains that the King can wipe out an entire universe on a whim if he pleases.

With the tournament over and Universe 7 the victor, Champa hands over the Super Dragon Balls, with the nameless planet itself being the seventh and final ball. Beerus has Whis make a wish to the Super Shenlong, but refuses to share what it was. Back in Champa’s cube, Vados notes that the humans on their Earth have been resurrected, and they are already creating delicious food.

Goku wants to have a battle with Monaka, but Beerus (understandably so!) refuses to allow this! 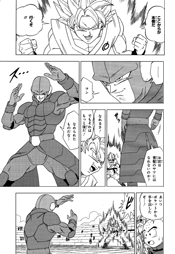 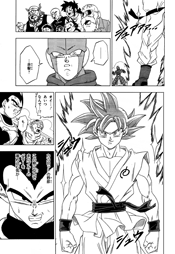 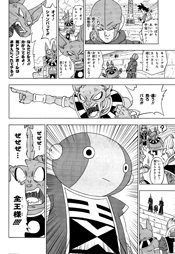