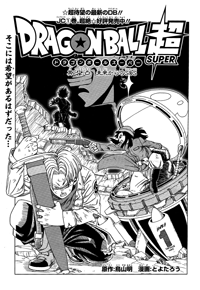 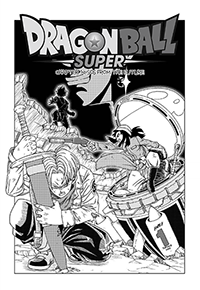 An SOS From the Future

Trunks runs through a devastated cityscape. Papers litter the street with declarations of war being over thanks to the defeat of #17 and #18.

Exhausted, Trunks stops running as something catches his attention. An explosion sends him hurtling through a building as a barrage of ki blasts follow him. Trunks fires back, but another explosion comes soon after, leaving a giant crater in its wake. Trunks manages to escape for now, but he must continue running.

Trunks makes his way to a basement where he is greeted by Mai. Trunks, unable to contain his emotions, explains that Bulma had been found. In total silence, Mai comforts Trunks on his loss. Mai shares some canned meat with Trunks, who explains that Bulma was able to charge up the time machine, though only enough for a one-way trip. Passing the remaining food to Mai, Trunks explains that he will go seventeen years into the alternate past where Goku and his father are still alive.

Back in our timeline, Jaco explains this “alternate past” concept to Bulma. Goku and Vegeta spar with each other while Beerus, Whis, and the others enjoy some good food. Jaco continues to berate Bulma, who claims to have no current expertise in this area. Bulma is eventually forced to explain things to Jaco and Tights. The present-day Trunks gets a crash-course of his own regarding alternate timelines… until the teacher realizes they should be covering arithmetic instead.

Bulma questions Whis regarding his time-rewind ability; Whis thinks of it more as being able to revisit choices rather than actual time travel. Beerus wonders why she even cares about this considering humans have no means of time travel. Bulma simply stammers in response.

Back in the future, Mai asks Trunks what makes seventeen years ago so special. Trunks theorizes that because these are the settings that are already in the time machine, if he adjusts them, he may not be able to return to the same timeline with the same people. With their help, the Artificial Humans were defeated in both timelines and there was peace… until “he” showed up. Trunks is not sure how that person was able to lock-on to his location, so it must be that he can sense ki now. Trunks hands Mai a shotgun, and the two prepare for departure.

As Goku and the others hunker down to eat, Whis compliments them on their masterful ki control. Goku asks about “Zen’ō” — the “Omni-King” — and why he could not feel any powerful energy emanating from him. Beerus and Whis explain that the Omni-King does not fight; with his authority, the Omni-King could destroy anything in the blink of an eye, from bad guys to even a complete universe. In fact, there were once 18 universes…! As Beerus eats the remaining food, he explains that this is why they were so uneasy when Goku was interacting with the Omni-King.

Trunks and Mai sneak through the sewers underground, making their way to Capsule Corporation. They appear to be alone, so Trunks blasts his way through a jammed lock on the door. A voice from behind them snickers, knowing they would return. Trunks fires a blast as a distraction, but their enemy is indeed now able to sense ki and returns the attack. Trunks draws his sword, screaming for Mai to hurry and get to the time machine. Trunks is easily smacked back down, prompting Mai to fire at the opponent with the shotgun. Before she can fire, Mai is also hit with a ki blast, knocking her down over a balcony. Trunks runs to grab a hold of her as the familiar-looking enemy promises to end Trunks’ life. 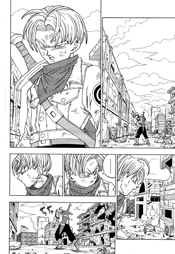 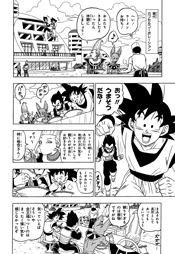 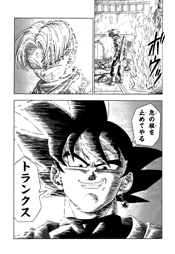