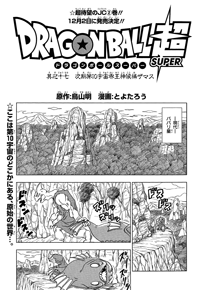 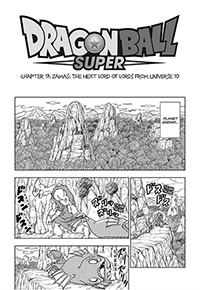 The Candidate for Next Kaiōshin of Universe 10, Zamasu

Gowasu and Zamasu watch from the sidelines as the primitive beasts on Planet Babari battle each other. This is how they act now, but what about a thousand years in the future? Will they have evolved beyond this kind of activity? Gowasu takes out a “Time Ring” — which Zamasu appears to have heard of before — and explains that they can use these under special circumstances to visit the future and then return to their exact world as before. Zamasu asks about traveling to the past, but Gowasu explains that this is strictly forbidden and is extremely dangerous. When history is changed via time travel, a different or parallel world is created and a new ring is born. A being from an advanced civilization in Universe 12 had created a method of time travel, and a ring was born from his escapades. Gowasu looks down at the box again, and notices that there are four rings, one more than he last observed. Someone very recently must have traveled into the past and created a parallel world. Pausing for a moment, Zamasu notes that he understands, and wishes to continue with their trip a thousand years into the future to observe the progress of the Babarians. Only Kaiōshin are allowed to time travel, so Gowasu temporarily promotes Zamasu from Kaiō to Kaiōshin with an earring for the trip. They are sure to place the earrings on the same side so as to not inadvertently fuse for eternity; this idea does not seem to amuse Zamasu in the least.

The pair travel into the future, and at first, things seem promising: Gowasu finds shelter, signs of a writing system, and even a musical instrument. Around the corner, however, Zamasu finds that the entire civilization at war with one another, perhaps even worse than before. Zamasu concludes that the universe would indeed be better off without these kinds of beings. Gowasu notices what appears to be an elder about to intervene, but at that moment, the gods are attacked from behind. Zamasu knocks the beastman backward and Gowasu announces that it is time for them to depart. Ignoring him entirely, Zamasu flares with anger and forms an energy blade around his hand. Zamasu slices the alien in half, concluding the attack with a smirk. Gowasu screams at Zamasu that they are leaving; the two immediately return, and Gowasu asks for the earring back along with an explanation of what just transpired. Zamasu explains that these worthless creatures do not deserve to live and wonders why the Kaiōshin exist at all if their only duty is to watch, rather than to use their power to intervene and judge. They must be rational and fair as gods, Gowasu explains. The trip has taken a toll on him, though, and he wishes Zamasu to prepare some tea.

Back on Earth, the heroes are engaged in a massive go-kart (video game!) race. When Vegeta is unable to take a successful turn at high speeds, Beerus finds his opening and takes the lead. The younger Trunks will not stand for this, and tosses a turtle shell to knock the god aside, enabling the future Trunks to secure a win. As Beerus and Whis depart, Goku suggests that they all get some rest in preparation for their next battle against Black. Trunks wishes to help Goku and Vegeta battle, so Vegeta invites Trunks to the gravity room in the morning for training.

Back in Universe 10, Zamasu is reviewing the fight between Goku and Hit on GodTube. Gowasu pops in and finds Zamasu watching the battle, having specifically searched for “Son Goku”. Zamasu deflects this inquiry, instead noting how even the Omni-King made an appearance at the tournament. Zamasu delicately inquires about the floating objects above the tournament; Gowasu explains that these are likely the Super Dragon Balls which are capable of granting any wish.

As the younger Trunks pulls himself out of bed, the future Trunks is already hard at work sparring with Vegeta inside the gravity chamber. Goku meditates alone, floating above a pond, as Beerus also stumbles himself awake. The Eastern Kaiōshin also makes an appearance to request a moment with Beerus; in turn, Beerus demands to know if any other gods might be particularly extreme in their mindset. Whis expands on this, suggesting perhaps a god who may be interested in the extermination of all humans…? Kaiōshin pauses and notes that he might be familiar with someone like that. Goku hops in as Kaiōshin answers the question: Kibito! None other than Kibito, Kaioshin’s attendant, has said discriminatory things about humans! (Such as them not being allowed to set foot on the Kaiōshin world… which Whis explains is perhaps not quite so extreme to the degree they were thinking.) Beerus wants to follow up on this lead, but Whis receives a transmission from the Great Priest: the Omni-King wishes to see Goku right this moment! Goku does not particularly want to go, especially since the trip will take Whis two days. Kaiōshin can simply teleport them there, however, saving a great deal of time. Beerus sends Whis along with them, as well, aggressively reminding Goku to be on his best behavior and not mention anything about this “Goku Black” character. Finally, Beerus sternly demands that Kaiōshin not die.

The group departs and are greeted by the Great Priest; Goku, in turn, exclaims, “Heya, I’m Son Goku!” 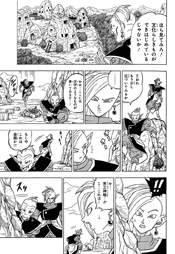 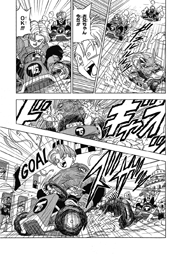 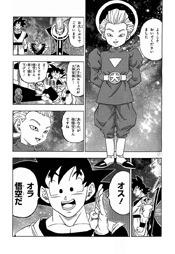