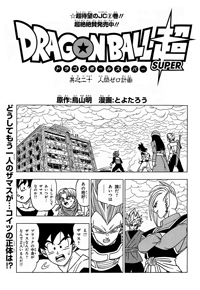 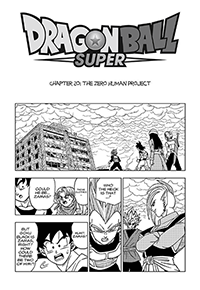 Goku, Vegeta, and Trunks are perplexed to see Zamasu standing alongside Black, who was supposed to be Zamasu inside Goku’s body.

Back in the present, Bulma informs Beerus that Goku and the others have already left for the future, and questions why there are two Zamasu. Kaiōshin explains that if the Zamasu that is inside Goku’s body is from their world, then there would logically also have to be a separate Zamasu there in Trunks’ world.

Vegeta pieces everything together as the two Zamasu wonder why these people have appeared in this timeline. Zamasu explains that there are no major obstacles in the five parallel worlds, but is perplexed to see a sixth time ring inside his box. Vegeta remarks that his past self was probably killed by Beerus, meaning there is now another world without Zamasu; Black finally concludes that these guys must have come from the past. After a bit of posturing back and forth, Vegeta blasts in on the offensive, but is ultimately cornered by Black, who has gotten stronger yet again. Black initially thought that simply stealing Goku’s body would be enough, but he could not satisfactorily transform into Super Saiyan, let alone Blue. Realizing this is what led him to discovering the Saiyans’ trademark. Trunks wonders if he means how Saiyans power-up after recovering from near-death experiences…

Kaiōshin explains that Black has likely been using this trait in conjunction with Zamasu’s healing ability to continuously power-up.

Vegeta continues to get pummeled, prompting Goku to offer him a senzu. Vegeta and Black trade blows, but Black clearly has the upper-hand. Trunks figures that his father and Goku are no longer able to exploit the Saiyan trait of powering-up due to their constant training. Zamasu heals Black to full strength, powering him up even more, to a level these lower beings could never dream of. Black transforms yet again, this time with pink hair (as Goku observes). Zamasu notes that unlike the others, when gods power up to this level, their hair must become pink instead of blue. To go along with the existing naming conventions, Black suggests the name “Super Saiyan Rosé” for his new form.

Goku and Vegeta, rather than teaming up, decide to split the fights: Vegeta will continue against Black, while Goku takes on Zamasu. As Goku’s battle seems to be going a little too well, Trunks thinks that something is wrong. When Goku knocks back Zamasu’s own levitating debris, the god is impaled… but, laughing all the while, Zamasu simply removes the broken pole while his body heals back to normal. Zamasu has not only destroyed the Dragon Balls, but used them one last time to wish for immortality. Zamasu telekinetically rips the senzu away from Goku and obliterates them in his hand. Zamasu exploits these powers against Goku while Black wails away on Vegeta, who collapses to the ground unconscious.

Trunks screams for them to retreat, while Black mocks him for helping him power-up all this time. Desperate for a way out, Trunks yells for Goku and Mai to close their eyes as he unleashes a Taiyō-ken on Zamasu and Black. Trunks and the others escape underground, trying to work out a strategy. Goku thinks back to how the turtle sage and his master were able to seal up an awful villain in a rice cooker: the Mafūba! Maybe they can seal these bad guys away, too! Trunks says they should hurry back to the past to learn this technique.

Black is unable to sense the Saiyans since they are able to reduce their energy. Smirking, though, Black is able to hone in on Mai’s ki signature, and teleports away with Zamasu. The gods see hooded figures sneaking off, but it is a decoy: Mai jumps out with her shotgun and a bunch of mannequins, while Trunks jumps in from behind with a surprise sword attack, impaling Zamasu yet again.

Off in the distance, Goku apologizes to Trunks for leaving him behind to fight alone again, departing in the time machine with Vegeta. 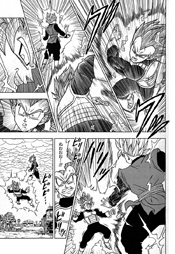 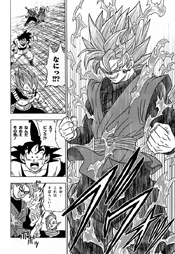 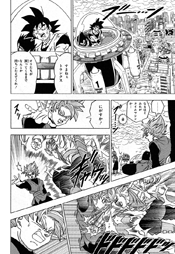