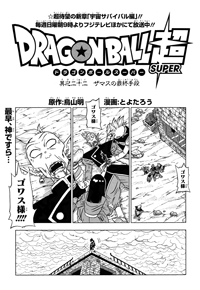 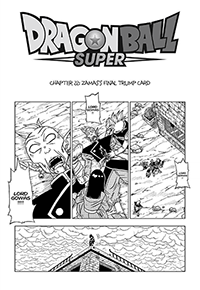 As Kaiōshin swears revenge for the attack on Gowasu, Zamasu blasts in to simultaneously attack and chastise him. Trunks holds onto Gowasu, begging for him not to die. Gowasu suddenly begins to cough up blood, meaning he is alive… for now. Trunks yells for Mai to escape with Gowasu, and charges in as a Super Saiyan.

Meanwhile, Goku and Vegeta have arrived back in the future. Everyone is alive, but the energy signatures are dropping. The two arrive in time, and Vegeta demands to take on Black while Goku is to go use the Mafūba on Zamasu. Goku departs to first give Trunks a senzu, and though Zamasu fires a blast to stop him, Goku teleports away with both Trunks and Kaiōshin in tow. Mai runs into the trio, and asks for a senzu to give to Gowasu.

After a brief stare-down and a bit of verbal posturing over power and transformations, Vegeta transforms into… Super Saiyan God?! Black believes Vegeta to have lost his mind, but at the same time, he is upset with how confident Vegeta appears to be. Vegeta handily dodges all of Black’s attacks. Black recognizes that Vegeta’s speed appears to have suddenly boosted at the last moment. Vegeta delivers a kick which sends Black flying and smashing into a building. Black is losing his temper and is still unable to ascertain what Vegeta’s new technique might be.

While Vegeta and Black continue to square off, Goku uses a senzu to heal Gowasu, reducing their bean count down to the last one. Goku confirms to Trunks that he has mastered the Mafūba, and produces a capsule containing the necessary jar. The group notice that Vegeta is easily handling Black, despite being at a stage lower than Super Saiyan Blue. Goku explains that Vegeta is not just using Super Saiyan God, but actually transforming up to Blue in the very last moment of his attack, thereby balancing his power and stamina. Goku confirms he did a similar thing against Hit, but Vegeta appears to have mastered this balancing act on a whole new level.

Zamasu flies in with a kick of his own to surprise Vegeta, and suggests that he and Black work together. Goku jumps in as well, determined to take on Zamasu and seal him away… though Black wonders what that random jar on the battlefield might be for. Vegeta fires some blasts to regain Black’s attention. Zamasu does not appear to be particularly worried, especially due to his immortality. Goku then uses the Mafūba, capturing Zamasu and perfectly landing him into the jar. Goku and Trunks struggle to tie up the jar’s lid ahead of affixing the magical charm… but Goku brought a hostess bar discount coupon instead of the actual charm, leaving Zamasu to furiously burst back out of the jar. With no other choice, Goku himself transforms up to Super Saiyan God, ready to battle. Zamasu tries to hold Goku in place, but the speed of Super Saiyan God is more than enough to get around it and deliver a few good punches. Goku seems to think Vegeta will end his fight soon, and tries to talk Zamasu down a bit, describing how he is effectively being used by his other self. Goku continues to effortlessly handle Zamasu, which only proceeds to anger Black. It appears the two Zamasu are about to lose it with each other when Black finally smiles and reminds the other Zamasu of their “final resort”. Goku realizes too late what the evil gods are up to, as the two Zamasu affix their Potara earrings…

The one god of all universes, Zamasu, is born! 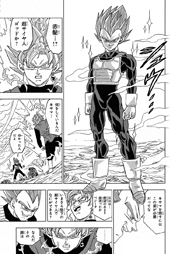 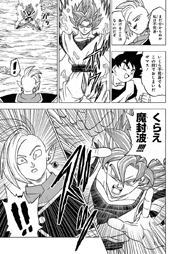 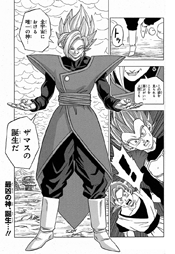