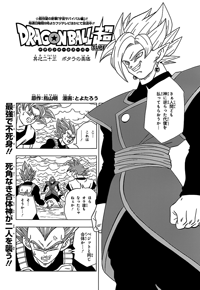 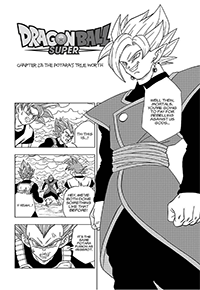 Goku and Vegeta now face off against a Potara fusion of Goku Black and Zamasu. It appears as if Goku and Vegeta are unable to land any worthwhile hits, but Goku finds an opening to deliver a Kamehameha which blows a hole through Zamasu’s chest. The hole closes right back up, unfortunately; Zamasu is just as immortal as before! Zamasu telekinetically grabs the two by their respective throats and causes a massive explosion, maniacally laughing and pontificating over his new godly reign.

Goku blocks a few blasts from hitting Trunks and the others. As he tries to tell them to get further away, Kaiōshin hands Goku his Potara earrings: if Goku and Vegeta fuse into Vegetto once more, Zamasu will be no match for them! Vegeta initially refuses, restating how he will never fuse again; Goku expected this as an answer, and agrees with said sentiment. The two plan on fighting with their own, individual power (going so far as to rock/paper/scissors to decide who fights next). Goku is pummeled by Katchin blocks throw by the merged god, which leaves Trunks feeling rather hopeless.

Gowasu notes how much of a shame it is that the group will seemingly not last for another hour; after all, that is how long Zamasu’s fusion is going to last. Vegeta exclaims that he believed the fusion was supposed to be permanent, but Gowasu corrects him in that the permanence is only for gods of their Kaiōshin rank; anyone else using the earrings will only last an hour. Even Kaiōshin is a bit perplexed, now understanding that Vegetto’s separation in Boo’s body must have just been due to said timing rather than due to other factors. Trunks is determined to help for the next hour, for the sake of this entire world, but especially his late mother.

Goku, out of power, debates whether or not to go ahead and just use the last senzu they have. Vegeta arrives and demands the second earring. As Zamasu senses the two below him and prepares to kill them, an enormous blast flies out of the building and hits Zamasu, taking his entire right side with it. Someone begins talking, realizing aloud how Zamasu was able to regrow his arm. It is Vegetto, the Potara fusion of Goku and Vegeta! Vegetto launches into an explanation of how both of their fusions will only last an hour, chomps down on the last senzu, and powers up to Super Saiyan Blue. Vegetto’s plan is to completely demolish Zamasu to the point of there being nothing left to regenerate. Zamasu bursts from the ground and grabs Vegetto by the legs, but the Saiyan fusion slices the god’s hands straight off with a ki sword. As Zamasu regenerates once more and prepares a barrage of Katchin blocks, Vegetto powers up a Final Kamehameha. Just as he is about to fire, the fusion suddenly splits apart back to a separate Goku and Vegeta…! 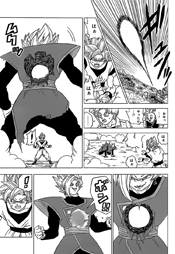 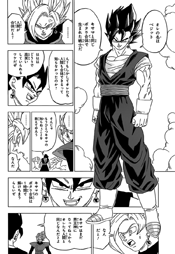 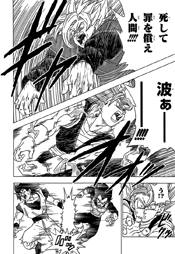