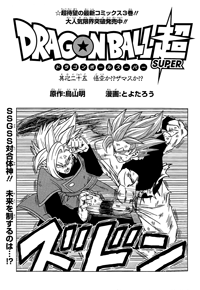 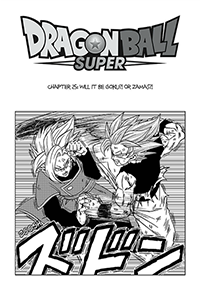 Goku continues his next round against Merged Zamasu, struggling against the god’s telekinetic powers, but still managing to land the occasional attack. Zamasu rips his shirt off in disbelief over the damage his body is taking, while Goku simultaneously is struggling to maintain his power and composure. Zamasu screams that he will take out the entire galaxy and rushes at Goku, who flies in with an unexpected technique: the same “destruction” Beerus used against Zamasu earlier in the timelines. As part of Zamasu’s body begins to disappear, he uses a portal to grab Mai and shove her in front of the technique, forcing Goku to stop. Zamasu kicks Goku aside and regenerates the missing part of his body. Trunks tries to rush Zamasu, but is handily knocked aside; Vegeta can tell that it is all over now.

Zamasu suddenly starts tearing in half; it must be an hour since his fusion! The two halves seem as if they are rejecting the split, however; Gowasu theorizes that since the two are technically the same person, they may have somehow joined on a cellular level due to the fusion. Trunks jumps in once again, this time managing to slice Zamasu into his two, individual halves. Trunks proceeds to stab his sword into the defeated Black’s chest. It finally appears as if the fight is over… but Black fires a blast at Trunks and stands back up, impaled-sword and all. Both Black and Zamasu transform into Merged Zamasu versions of themselves, who then begin another assault on Goku. With Goku and Trunks down, Vegeta explodes in a rage toward the gods, kicks Goku aside, and unleashes a Gamma Burst Flash. In the wake of the blast, detached body parts of the gods wiggle on the ground in an attempt to reform. The Kaiōshin try to get the others to teleport away with them, but there are suddenly numerous Zamasu that have reformed…! 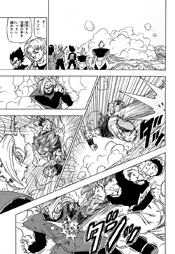 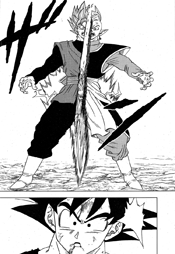 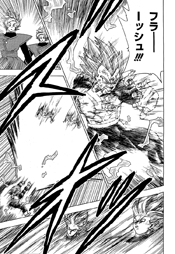