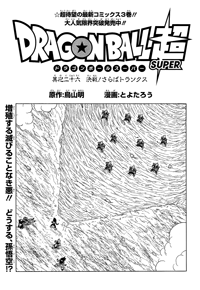 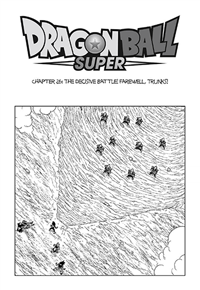 As all of the Merged Zamasu rush in, Kaiōshin teleports Goku and Vegeta to safety; he and Gowasu will escape with the time ring, while Goku and Vegeta should use the time machine. Zamasu is determined to kill them, however, and the clones surround the heroes. Zamasu reveals that he has the time machine used in Universe 12, with which he intends to follow them to any and every timeline to eliminate them with the rest of humanity. Goku and Vegeta decide to stick around and fight to the bitter end, telling Trunks to return to his mother in the time machine. The two begin to power up without any real battle plan, when Goku suddenly remembers: the Omni-King! Would he still be around in this timeline? Smirking, Goku takes out the button that can call the Omni-King, and presses it to immediately summon him there. Goku quickly introduces himself, as this particular Omni-King has not actually met him before. The Omni-King does not appear to like this place, prompting Goku to point to Zamasu as the culprit. Goku eggs him on further, asking if he wants to erase them all. The Omni-King agrees, saying a world like this… should disappear. All of the Zamasu flee in terror, while Goku shoves them all into the time machine just in the nick of time.

A time ring cracks and fizzles away…

Goku, Vegeta, and Trunks safely arrive back in the normal timeline with Kaiōshin and Gowasu not far behind. Everyone greets their loved ones and enjoys a relaxing dinner while relaying the story to Beerus and Whis. Even though there is technically nothing left in that world, Goku still asks to use the time machine for one last thing: to recover the Omni-King! After a quick introduction back at home, the future Omni-King is brought to the present-day Omni-King. As the two new friends run off, the Great Priest asks if this was Whis’ idea, which he denies; Whis follows up saying that he as his father, the priest can come visit him any time.

Gowasu is off back to Universe 10, though not without a stern recommendation from Beerus to be more careful with future apprentices. Trunks and Mai want to return to some point in their future. Whis says this is possible, prompting Beerus to argue with him over the creation of additional parallel worlds. Kaiōshin tells Trunks to speak with the Beerus in that timeline so they can take care of Zamasu should be prove to be a problem there. Another set of Trunks and Mai will also be present in this new timeline, which does not bother them. Kaiōshin asks if Trunks would like to stay as his apprentice, but Trunks states that he only took on that role in order to defeat Bobbidi and Dabra. The younger, present-day Trunks and Mai see off their older selves, with the younger Mai finally realizing and admitting to her interest in the younger Trunks. With their final goodbyes said, Trunks and Mai depart. 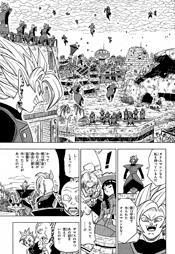 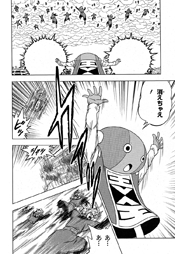 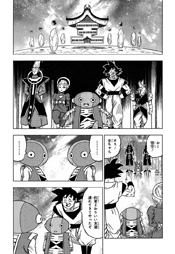