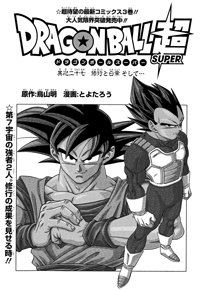 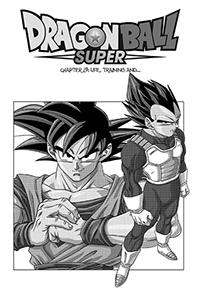 Training and Everyday Life, and…

Following the fight with Zamasu, life back on Earth returns to normal. As Goku stops his delivery truck to help someone by the side of the road, he is attached by carjackers. Goku is not about to give up this fancy truck, and handily dodges all of their attacks and gun shots… except for one bullet, which manages to graze his arm. Goku receives a bounty after dropping off the criminals at the police station, and justifying this as enough money to satisfy Chi-Chi, he tries to call Whis on his communication device.

Whis, however, is busy training Vegeta on Beerus’ planet. Beerus comments that Vegeta seems more into the training than usual; the Oracle Fish wonders if this is because Goku was stronger than him during their battle with Zamasu. Fed up with this rivalry nonsense and disparaging the fish’s prophecy, Beerus attempts to leave for a nap. The Oracle Fish insists, however, that these two will be Beerus’ strongest rivals. Beerus immediately switches gears, insisting that Vegeta have another go with him.

Vegeta agrees and rushes in as a Super Saiyan Blue. Beerus acknowledges the newfound power, but states that this is just a mere power-up from Super Saiyan God and is still not enough to reach his level. Beerus continues to handily dodge each of Vegeta’s attacks, eventually slapping him into the water with his tail.

Calmly rising out of the water, Vegeta reverts to standard Super Saiyan God. Whis wonders when Vegeta learned to do this, but Vegeta simply responds that if Kakarrot can do it, so should he be able to. Beerus resumes the fight, and it appears that Vegeta has already improved a bit more. Whis notes that Vegeta appears to have complete control over Super Saiyan Blue now, and that perhaps Goku is no longer ahead of him anymore. The Oracle Fish asks if Beerus is actually taking this fight seriously, though; he is still playing around, but he should probably take it a bit more seriously or he will take a hit and lose his temper.

Indeed, Vegeta lands a punch square into Beerus’ face. The Oracle Fish clamors for Whis to create a barrier, but Whis seems to have misplaced his staff. With a massive explosion, Beerus slams Vegeta into the ground, saying Vegeta got carried away while he was going easy on him. Vegeta has certainly improved, and perhaps could be a candidate for God of Destruction in another universe, but he is still a million years away from catching up to Beerus.

Whis chats with Vegeta, noting that he still thinks first and moves later, which is limiting. Rather, he needs to let every part of his body think and move on its own. This is something even Beerus has not quite mastered! Whis asks if Vegeta would like to intensify his training, but Vegeta needs to return to Earth and will not be coming back for a while.

Goku finally gets his call through to Whis. He would like to meet up and perhaps invite Vegeta along; Whis responds that Vegeta is already there, but is just about to leave. It turns out that Vegeta’s second child is about to be born!

A very pregnant Bulma appears as Goku, Whis, Vegeta and the others arrive. Vegeta does not want to leave Bulma during this time. Goku does not understand why; after all, Vegeta is not the one giving birth! Goku does not know when Gohan and Goten were born. Vegeta claims that Goku may in fact be a horrible father. Goku ends up departing with Whis, leaving Vegeta to convince himself that he made the right decision.

Goku, Beerus, and Whis enjoy some daifuku before moving on to training and nap time. Goku wants to talk about the promise they made the Omni-King about the inter-universal tournament, but Beerus demands that he drop the issue and not bother the Omni-King. Even Whis agrees, as they explain that the Omni-King’s purity is what makes him so scary. He has the power to destroy an entire universe, and this must not be treated lightly. Goku still has the device, however, with one side summoning the Omni-King, and the other side transporting him to the Omni-King. Which should he choose?!

With a smirk, Goku flips the device, presses the button, and disappears! 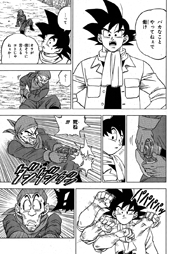 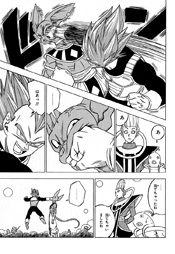 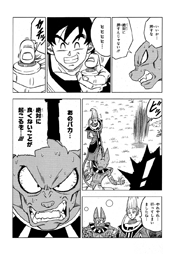