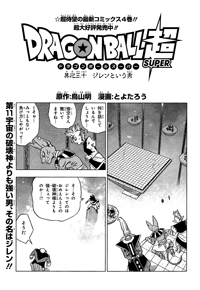 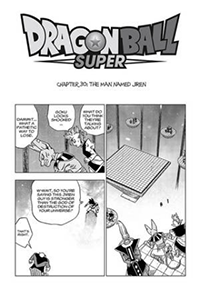 Goku is unable to comprehend how there is someone stronger than Toppo in Universe 11, and this “Jiren” also has no interest in becoming a God of Destruction! Goku is excited for the tournament and the possibility of there being so many strong guys out there; Toppo thinks Goku is quite odd.

The Great Priest announces that each universe shall select ten competitors, and that knocking an opponent out of the ring is the method for disqualification. The tournament will last 100 taks (approximately 48 minutes), and it will be a battle royale with all opponents fighting in the ring together at the same time. The team with the most remaining fighters at the end will be the winner, or in the case that only one fighter is left, obviously that fighter’s universe will be the winner. The Super Dragon Balls will be given to the strongest fighter; as such, the Great Priest requests that Champa hand over the three he has already collected, and they will gather the remaining balls.

The Universe 3 Kaiōshin Ea asks if the winning universe itself will gain anything as a reward, but the Great Priest explains that they will receive nothing; instead, the losing universes will be erased by the Omni-King one by one. Universes 1, 5, 8, and 12 will be exempt from the tournament due to their higher mortal level, which means that only five will remain in the end. The erasure will include all of the gods — save for their guide angels, of course — which further puts everyone into a panic. Beerus wonders if their mortal level is actually that low; Whis explains that it is 3.18, the second-lowest rating.

With a little under 39 hours until the tournament begins in the special “Word of Void”, the Great Priest teleports everyone back home to begin recruiting their teammates. Beerus is furious with Goku over their predicament, though Kaiōshin rightfully notes that it sounds like the Omni-Kings were going to erase these universes anyway before deciding on the tournament, thus giving them a literal fighting chance to save themselves. Since the best fighters are probably on Earth anyway, they decide to make their way to Bulma’s to eat up and start planning.

Over in Universe 11, Vermoud is relatively unfazed by their predicament, fully confident in Toppo and the Pride Troopers… so long as Jiren participates.

Back at Capsule Corporation, Vegeta and Bulma are in disbelief at Goku’s incompetence. Since there is no written exam this time, they figure they can bring Boo along. Vegeta would be a natural choice himself, but Vegeta’s second child is due any day and he will not leave! Whis appears holding a blanket, and with a quick motion of his eyes, is able to “deliver” the baby right out of Bulma! Goku figures this is how babies are actually born and this must be the way Chi-Chi did it…

With Vegeta now able to participate, the group moves on to figuring out the rest of their team. There are apparently only 28 planets with appropriate lifeforms on them, but Kaiōshin has not observed them all in terms of their combat strength. Whis suggests they continue from the previous tournament’s team of Goku, Vegeta, Piccolo, and Boo. Goku suggests Monaka, but Beerus forbids it, saying Monaka is ill. Vegeta questions if Gohan can fight; Goku is unsure. Goku questions is they should bring Goten and Trunks; Vegeta says to leave the kids out of this, and to not even tell them about it. Goku then figures they can bring the Turtle Hermit, Tenshinhan, and Kuririn along with his wife No. 18. Vegeta figures if they are bringing No. 18, they should also bring No. 17. They have no idea where No. 17 might be, though, so Goku takes off to ask No. 18 about him.

Over in Universe 11 on Planet Bath, the Pride Troopers fight back against a giant crab monster. Toppo arrives and shoots the monster as Dispo protects a child. Jiren is apparently off on a distant planet named Towale recapturing Oshlet aliens, and he will return once the situation is under control. The crab monster fires an enormous amount of foam from his mouth trapping everyone around him, but someone flies in with a quick series of attacks, ultimately trapping the monster with a device attached to his arm. Jiren has arrived, and has apparently flown directly here without the aid of a spaceship.

Vermoud explains that Jiren has devoted himself to justice, does not act on self-interest, and will not even kill bad guys. There is one thing that can bait him into participating in the tournament, however, and the Super Dragon Balls can grant him that wish. Vermoud then asks to be taken directly to Jiren.

Back on Bath, Jiren declines to participate when asked by Toppo, saying that he will not save their own universe at the cost of others being erased. From above, Vermoud states that his wish could come true should they win. Jiren will participate, but only on the condition that he will return to Universe 11 should any trouble occur while he is away. 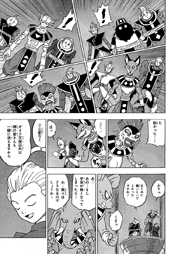 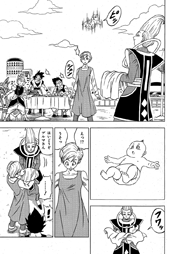 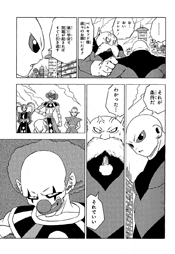