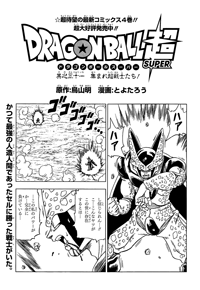 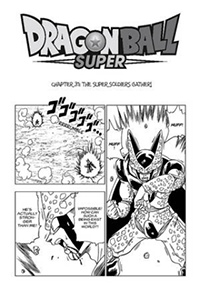 A special television broadcast showcases Earth’s hero Mr. Satan taking on and defeating Cell. Satan comments to the interviewers how many miracles took place back then, more than ten years ago, including the resurrection of all the people killed by Cell. Watching the broadcast from their home, Kuririn comments to his family how it was them who asked Shenlong to bring them back. The interviewer asks for a comment on a mysterious young man who was seen standing in the spot where Cell disappeared, but Satan reiterates that Cell is totally gone for good. Upon hearing that Satan saved the Earth yet again seven years later, No. 18 clicks the television off.

Goku arrives at their home, intent on asking Kuririn and No. 18 to participate in the upcoming tournament. Dancing around the specifics of the tournament’s ramifications, Goku eventually settling on a lie of each participant winning 10 million Zeni… which finally convinces No. 18 to get involved. Goku asks where No. 17 is since he would like to invite him to participate as well, but No. 18 only knows that he is working at some wildlife sanctuary. Kuririn suggests that he ask Dende, since as Earth’s God he would be able to see everything.

Upon his arrival, Dende confesses to Goku that he already knows the trouble they are all in, having figured something was up when the Kaiōshin and God of Destruction had arrived on Earth. Popo states that this is all Goku’s fault, but Dende admits that it is also thanks to Goku that they even have a fighting chance. Dende agrees to show Goku where No. 17 is, and the palace begins flying off to the south. As they travel, Dende postulates that Kuririn wishing for the bombs to be removed from No. 17 appears to have triggered him to regain his humanity, so to speak, as opposed to how evil he was before. It seems that No. 17 is even stronger than he was back then, and that it would be trouble if he were still their enemy. Goku seems surprised by this, to which Popo notes that Goku has been too preoccupied with all these matters in space that he has neglected what has been happening back on Earth. Dende goes on to ask Goku if he knows of a boy with extraordinary abilities living in a small village to the south; this prodigy is named Oob, he is the reincarnation of Boo, and Dende hopes that Goku can train him some day.

As they arrive above the island in question, Goku flies down to search for No. 17. He is surrounded on the ground by monsters, only to next be caught up in a gang of poachers chasing after them. Goku has no idea what No. 17 looks like, however, and assumes the head poacher is him. The poachers spot the actual No. 17 and open fire, only to be easily handled and tossed into the distance. No. 17 attacks Goku next (who is wearing one of the poacher masks); the two trade blows with Goku powering-up first to regular Super Saiyan, and ultimately to Super Saiyan 3. No. 17 holds his own, and manages to trap Goku who begins pleading for him to listen. Goku’s voice is familiar to No. 17 from having been inside Cell, and while he is willing to listen to what Goku has to say, he needs to wrap things up with the poachers first.

Chatting over a fire in the evening, No. 17 declines to participate in the tournament, saying he has a job to do here. Goku becomes persistent and a little more desperate, stating that everyone’s lives are on the line. Even after explaining everything, No. 17 still does not want to participate, figuring if they all get erased, at least they will all be erased together. Upon hearing that Kuririn will be fighting and the Super Dragon Balls can grant any wish, however, No. 17 begins to change his mind. He would love a cruiser to sail around on with his family… so he figures he may as well fight, too.

Satan leaves his television interview to check-in with Boo, who has unfortunately fallen into a deep slumber. While he normally only sleeps for moments at a time, every so often he goes into a two-month hibernation. Satan calls Bulma to let her and the others know, distracting her from thinking about Yamcha as a possible team member. They are down to only eight competitors now, so Vegeta suggests they get Gohan. Whis calls Goku to relay the news, who then heads to Piccolo who wants senzu in order to knock Gohan into shape! 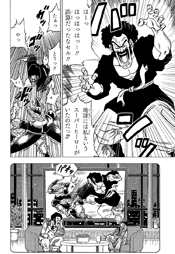 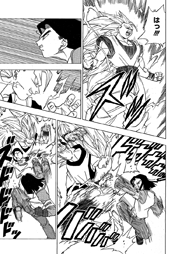 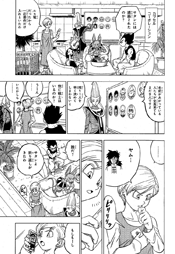