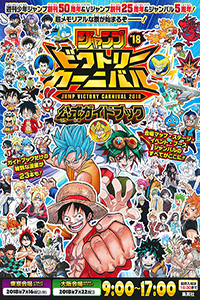 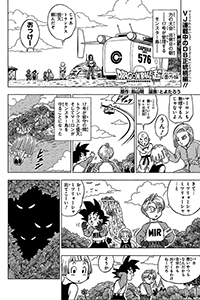 As No. 17 leaves to participate in the Tournament of Power, Goten and Trunks (along with Marron, much to Kuririn’s chagrin) stay behind to take care Monster Island where No. 17 currently serves as a ranger. While Goten and Trunks look for poachers, Marron spots something: Cell Jrs. appear from the bushes and attack the kids!

Up in the airship flying away from the island, No. 17 realizes he forgot to mention the “fake” Cell Jrs. There are seven of them, and they are just as strong as the seven that No. 18 would have seen back during the Cell Games.

Goten and Trunks, both Super Saiyans, are struggling to keep the seven monsters at bay. One of the Cell Jrs. notices the “ranger” armband the kids are wearing, and the seven suddenly stop fighting to huddle up for a discussion. After a quick laugh and a bow, all seven of them dash back into the bushes, leaving Goten and Trunks standing alone in shock.

No. 17 explains that he tamed the Cell Jrs. so they will not attack rangers, so the kids should be fine. Kuririn begins to understand No. 17’s true strength…

As Goten and Trunks continue to wonder about the monsters on this island, the narrator explains how Cell could regenerate himself from the nucleus in his head, so perhaps these are actually the real Cell Jrs… 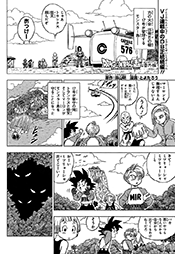 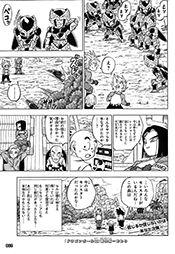 Previous
Dragon Ball Super / Bonus Chapters
Connect With Us
Support Us
Your support for Kanzenshuu is what keeps us going. You can help by donating to us directly, or by shopping online at certain retailers through our affiliate links below. Every bit counts and helps contribute to our server fees and bringing you new site content, reviews, and contest items.