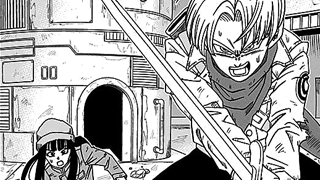 With No. 17 and 18 defeated, a new menace has appeared threatening the world of the future. A mysterious man known only as “Black” suddenly appears and goes on a rampage, driving humanity to the brink of extinction. Future Trunks and Mai lead a valiant resistance, but even the power of a Super Saiyan is no match for Black. With Bulma’s death, Trunks vows to use the last remaining fuel she had gathered to make a one-way trip in the time machine to the past to ask Goku and Vegeta for their help once again. However, before he can leave his path is blocked by Black, who looks exactly like Goku!

Narrowly escaping in the time machine, Trunks returns 17 years into the alternate past where Goku and his father are still alive. Trunks explains everything that has happened in the future, saying that “Goku Black” is obsessed with eradicating mortals and somehow can travel between parallel worlds. Whis is intrigued, Beerus has no idea what is going on, and Goku and the others want to help. Meanwhile in Universe 10, Zamasu is training with Kibito of Universe 7 to be Gowasu’s successor as Kaiōshin. Learning of Majin Boo’s defeat, Zamasu is astonished to hear mere mortals have achieved power surpassing that of the gods. As Kaiōshin and Kibito depart, Zamasu notes they should protect the order of their respective universes and exterminate unnecessary existences.

After some downtime, quick training, and a meeting with Omni-King, the trio of Saiyans return to Trunks’ future to confront Black. At the same time, Beerus and Whis travel to Universe 10 to meet with Gowasu and Zamasu. Kaiōshin arrives as well, and having used the time ring to see Zamazu’s future, confirms to Beerus all the of evil things he will do. Hearing this, Beerus destroys Zamasu of the present. Meanwhile in the future, Goku tells Black that they know everything — he is actually Zamasu, who used the Super Dragon Balls to switch bodies with Goku. As the battle wages on, Black is pushed to the brink and just as Vegeta prepares to finish it all, Black is saved by Zamasu.

With the tables starting to turn against them, Goku and Vegeta decide to split-up the fights: Vegeta will continue against Black, while Goku takes on Zamasu. However, they soon find that Zamasu had also used the Super Dragon Balls to wish for immortality. With their backs against the wall, the two Saiyans retreat back to the present to regroup and learn the Turtle Sage’s Mafūba technique. Trunks stays behind with Mai, but they are quickly overtaken by Black. Gowasu and Universe 7’s Kaiōshin suddenly appear from the past, taking Trunks and Mai with them as they teleport away to the future’s now-uninhabited Kaiōshin realm and await Goku and Vegeta’s return to the future. Gowasu returns to try and talk sense into Zamasu, but is instead killed by Black.

Goku and Vegeta arrive back in the future. With the power and agility of Super Saiyan God, Vegeta takes full control of his battle with Black. Goku meanwhile uses the Mafūba to imprison Zamasu, but forgot the magical charm to seal the container and Zamasu bursts out enraged. Black and Zamasu team up to take on the two Saiyans, but it soon becomes evident they are no match against Super Saiyan Blue. Seeing their fate, the two enact their “final resort” and merge using the Potara earrings, flipping the tables on Goku and Vegeta. The individual Saiyans struggle against such a powered-up immortal god, but eventually counter with a Potara fusion of their own — Super Saiyan Blue Vegetto!

However their fusion abruptly ends, leaving Goku to face off with the Merged Zamasu by himself. Even having mastered all of Super Saiyan Blue’s overflowing power, Goku is no match for Zamasu’s immortality. Vegeta and Trunks re-enter the fray and severely damage Zamasu, but each body part regenerates into a separate Zamasu. As all of the Merged Zamasu rush in to finish them off, Goku suddenly remembers: the Omni-King! Taking the button out of his pocket, Goku presses it to immediately summon him there. The Omni-King does not like this place and, with some coercion from Goku, decides to erase them all. All of the Zamasu flee in terror, while Goku shoves them all into the time machine just in the nick of time. Safe back in the normal timeline, Goku introduces the future Omni-King to the present-day Omni-King and the two new friends run off.