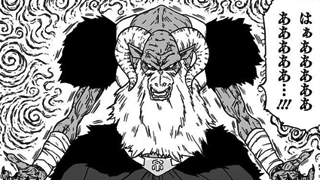 Following their encounter with Freeza and Broli on Earth, Goku and Vegeta continue their training until one day the Galactic Patrol arrives to take the slumbering Majin Boo. As the two try to stop this, they are knocked unconscious and taken as well. Eventually awakening, they learn that a dangerous criminal imprisoned for 10 million years has escaped Galactic Prison and that only Majin Boo, or rather Dai Kaiōshin inside of him, can recapture the criminal known as the planet-eater Moro and save the universes from his wrath. Hearing this, Goku volunteers their help to the Galactic Patrol and they are quickly appointed “Special Member” status.

They soon discover that Moro is heading to New Planet Namek in search of the Dragon Balls, which he learned of from Freeza’s former underling, Cranberi, in prison. Goku and Vegeta immediately teleport to the planet and warn the Namekians of the impending danger. Moro soon arrives and a grand battle unfolds; however, the two Saiyans quickly realize that Moro wields powerful magic allowing him to absorb the power of those around him, including them!

Dragon Ball Super Chapter 51Pages: 45
それぞれの行動
Sore Zore no Kōdō
To Each Their Own Plans

Dragon Ball Super Chapter 56Pages: 45
地球戦士集結
Chikyū Senshi Shūketsu
Warriors of Earth Assemble
«
Manga Guide / Dragon Ball Super Manga
Next Arc
Connect With Us
Support Us
Your support for Kanzenshuu is what keeps us going. You can help by donating to us directly, or by shopping online at certain retailers through our affiliate links below. Every bit counts and helps contribute to our server fees and bringing you new site content, reviews, and contest items.