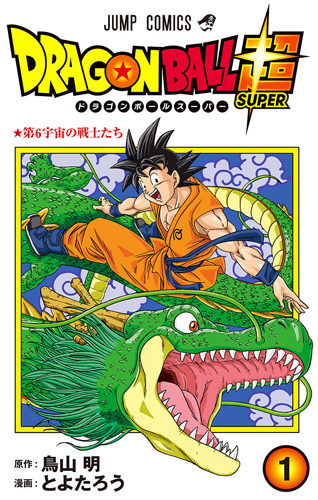 The first volume’s dust jacket features a new cover illustration by Toyotarō with Goku and a stylized Shenlong (a la older Akira Toriyama and Dragon Ball illustrations). The back cover features Goten and Trunks painting the Jump Comics logo. The flaps include a short biography for Toyotarō along with Goku in Super Saiyan Blue.

The included obi promotes the monthly release of Shueisha’s V-Jump magazine (where the Dragon Ball Super manga is serialized). Other products featured are the “Full Color” version of the manga release and the 30th anniversary “Super History Book”.

The title for the collected volume — 第６宇宙の戦士たち (Dai-Roku Uchū no Senshi-tachi or “Warriors from Universe 6”) — is taken directly from the seventh chapter‘s title.

The volume’s standard front cover is a desaturated version of the dust jacket’s front cover, while the back cover is a complementary illustration of Vegeta with a stylized Porunga. 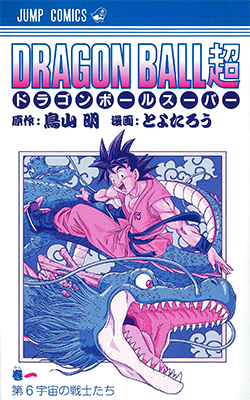 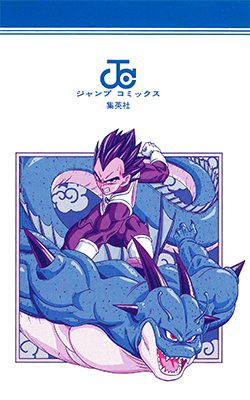 The inside title page is a piece of promotional artwork by Toyotarō. The table of contents features super-deformed versions of Goku, Vegeta, Beerus, Whis, Champa, and Vados alongside a two-page span of Shenlong. The first and fifth chapters’ title pages — originally in full color in their V-Jump serialization — are presented in grayscale here. 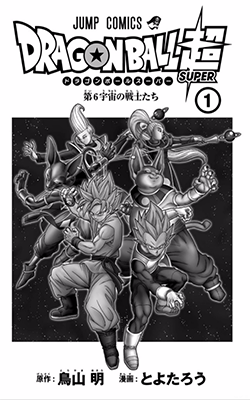 To fill out the necessary page count, Toyotarō supplies new drawings between chapters. These range from silly, such as Vegeta practicing bingo, to meta-commentary, such as Sorbet commenting “W-We’ve been skipped…” 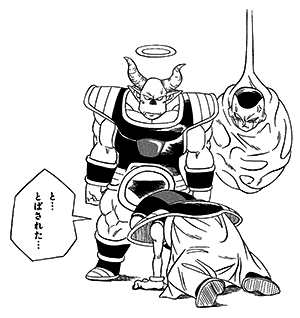 The Dragon Ball Super manga covered the Battle of Gods re-telling, skipped the Resurrection ‘F’ re-telling, and “charged ahead” to the Champa arc to act as further promotion for the television series. Toyotarō had previously contributed an introductory, three-chapter manga adaptation of the original Resurrection ‘F’ film in the April, May, and June 2015 issues of V-Jump.

The volume wraps up with a two-page “Tori-Toyo Interview” with both Toyotarō and original creator Akira Toriyama. A supplemental “web version” of the interview was provided alongside the book’s release on Shueisha’s official V-Jump website.

Viz’s English translation of the volume mistakenly adapts Sorbet’s bonus as “I… was flown down here…”. While the literal meaning of とばされた (tobasareta) is “jumped/flown over”, in general conversation and context it takes on the meaning of being “skipped”. Other non-English international translations adapted this line accurately.

Dragon Ball Super / Tankōbon Release
Volume 02
Connect With Us
Support Us
Your support for Kanzenshuu is what keeps us going. You can help by donating to us directly, or by shopping online at certain retailers through our affiliate links below. Every bit counts and helps contribute to our server fees and bringing you new site content, reviews, and contest items.