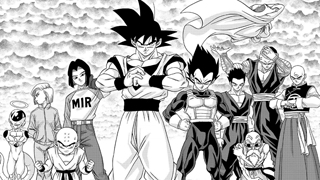 Having thoroughly enjoyed the martial arts tournament between Universes 6 and 7, the Omni-King plans to hold another one himself, although this time with all 12 universes! Much to Beerus and Whis’ relief, and thanks to the events with Goku Black, the Omni-King seems to have been OK with sidelining this next tournament. However, with the prospect of battling the greatest warriors in every universe, Goku has not let the idea slip his mind. While training with Whis, Goku suddenly recalls the Omni-King mentioning that he planned to hold the tournament “soon”. Before Whis can stop him, Goku summons the Omni-King to discuss it. While Goku is filled with unabashed delight, Beerus and Whis are fraught with fear at the consequences of losing… complete annihilation of their universe!

Goku recruits Earth’s greatest warriors, including Freeza, to represent Universe 7 in the tournament. With each universe’s team set, they assemble in the “Word of Void” and the Universe’s Greatest Martial Arts Tournament is set to begin. It is quickly apparent that each universe has it out for Goku and Universe 7 for putting their mere existence in jeopardy. As the tournament unfolds, six of the eight competing universes have been annihilated from existence, with only Universes 7 and 11 remaining.