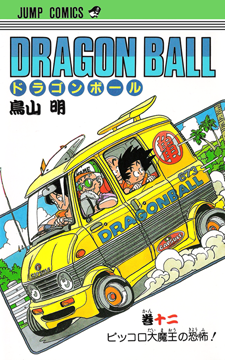 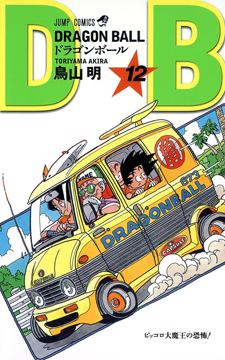 The Terror of Demon King Piccolo!

EN
JP
我が家のネコ『コゲ』です。まっ黒でなにがなんだか、よくわからんと思いますが、とにかくコゲです。３年ほど前の夜中に子猫でひろったのですが、人なつこくて気立てのいいヤツです。出産の時（メスなんです）は、そりゃもう心配で心配で、こっちの方が大さわぎしたもんです。ぶじ４匹のチビが元気に生まれました。よかったよかった。ところで『コゲ』と名付けたのは、ボクの奥様でした。
This is our family cat, “Koge”. You probably can’t tell what’s what since she’s jet-black, but anyway, it’s Koge. We took her in one night three years ago as a kitten, and she’s really nice and friendly. When she gave birth (since she’s female), we were really, really worried, and we made a huge fuss. She gave birth without incident to four healthy little ones. We were just so glad. By the way, the one who named her “Koge” was my wife.

This volume compiles chapters 133 to 144 as originally serialized in Weekly Shōnen Jump, covering issues 1987 #33 to 1987 #44. All chapter title pages shown below are those included in this volume. The chapter premiere dates listed below are based on the sale date of their respective issue of Weekly Shōnen Jump, which is when that issue officially went on sale. 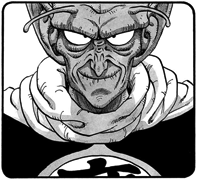 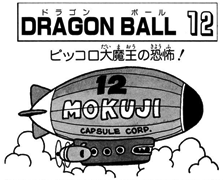