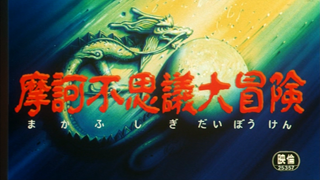 The movie premiered as part of the Summer 1988 “Toei Cartoon Festival” (東映まんがまつり; Tōei Manga Matsuri) on 09 July 1988, along with three other movies from the Tatakae!! Ramenman, Bikkuriman, and Kamen Rider Black series. The “Toei Cartoon Festival” was established by Toei in 1969 as a way to showcase their popular children’s series as theatrical films during seasonal breaks in the school year: spring vacation, summer vacation, and winter vacation. In Japan, almost all schools below the university level run a three-term school year (trimester system) with a vacation period of several weeks to a month at the end of each trimester. The movies were screened together back-to-back in various cities across Japan, with a typical total running time of roughly three hours. Most festivals would last roughly one month, or as long as the seasonal vacation allowed. Tickets could be purchased at the theater, or discount tickets could be purchased in advance which covered the cost of admission, as well as a bonus item such as a promotional pamphlet describing the featured movies, and various other special presents, such as posters, paper hats, cards, and toys. Additional items, including the official theatrical pamphlet and a variety of other commemorative goods, were available for purchase at cinemas or by mail during this period.

With the help of Pilaf’s gang, the Miphan Empire’s Tsuru-Sen’nin investigates the location of the Dragon Balls. As a show of gratitude for their assistance, he “rewards” the three of them with impending death, courtesy of Tao Pai-pai. Elsewhere, Goku and Kuririn have been training under Kame-Sen’nin for the Miphan Empire’s upcoming martial arts tournament. Back in the Miphan Empire, however, Emperor Chiaotzu’s precious doll, Ran-Ran, has disappeared. Ostensibly in order to help Chiaotzu find Ran-Ran, Tsuru-Sen’nin has begun to gather the Dragon Balls, but he really plans to kill Chiaotzu and take over the country. He will stop at nothing to achieve his aim, and even goes so far as to kill Blue to keep his plan a secret. The imperial army even attacks Bulma and the others, who are also searching for the Dragon Balls.

Meanwhile, the Karin Holy Land is in a state of unrest, as the imperial army is harassing its people in search of one of the Dragon Balls. Upa and his father Bora have found the final Dragon Ball, and decide to head to Miphan to find out its secret. The imperial army follows them and attacks them while they are eating in a restaurant. Fortunately, because of his enormous hunger, Goku is also eating at the restaurant and protects the two of them from the tyrannical imperial army and its robot soldier, Metallic.

Bora decides to enter the tournament in hopes that, if he wins, he can have an audience with the emperor and convince him to stop harassing his people. Goku sees that Upa and Bora have the Four-Star Ball, and he cannot believe they found his grandfather’s keepsake. The tournament finally begins, and as the matches heat up, Bulma sneaks into the palace, having had Oolong and Pu’er transform into Chiaotzu and Tsuru-Sen’nin, to find all of the remaining Dragon Balls.

Back at the tournament, Bora has easily defeated Yamcha and is about to win the championship when Tao Pai-pai decides to enter in order to stop him. It is soon apparent that Bora is no match for the assassin, and he is impaled as Tao Pai-pai throws him from the ring. Goku is enraged and challenges Tao Pai-pai, vowing to revive the fallen Bora. Tao Pai-pai merely laughs and sends Goku flying off to Karin Tower with a Dodonpa. The Four-Star Ball hidden in Goku’s dōgi saves his life, however, and he regains his strength after eating a senzu from Karin.

Tao Pai-pai is sent to find Goku after Tsuru-Sen’nin realizes that the boy has the last Dragon Ball. As the battle begins, the two find themselves in Penguin Village. With some help from Arale Norimaki and the two Gajira, Goku eventually defeats Tao Pai-pai. Meanwhile, back in Miphan, Bulma and the others are caught stealing the remaining Dragon Balls. As they try to escape, they drop the balls into a deep crevice in the bottom of the palace moat. Tsuru-Sen’nin’s plans are revealed, and he orders Tenshinhan to kill Chiaotzu. Tenshinhan, however, turns on his master instead, defeating him with a Kikōhō.

Goku arrives just in time to save Upa from Metallic, and Tenshinhan returns Ran-Ran to Chiaotzu. With peace restored to the empire, Goku makes good on his promise and tosses the last Dragon Ball into the palace moat: “Come forth Shenlong!” The skies darken and Shenlong appears. As the credits roll, Goku’s wish is granted and Bora is brought back to life.