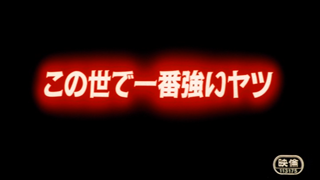 The movie premiered as part of the Spring 1990 “Toei Anime Festival” (東映アニメまつり; Tōei Anime Matsuri) on 10 March 1990, along with two other movies from the Akuma-kun and Sally the Witch series. The event’s name was changed for this season from its original name, the “Toei Cartoon Festival” (東映まんがまつり; Tōei Manga Matsuri), which was established by Toei in 1969 as a way to showcase their popular children’s series as theatrical films during seasonal breaks in the school year. In Japan, almost all schools below the university level run a three-term school year (trimester system) with a vacation period of several weeks to a month at the end of each trimester: spring vacation, summer vacation, and winter vacation. The movies were screened together back-to-back in various cities across Japan, with a typical total running time of roughly three hours. Most festivals would last roughly one month, or as long as the seasonal vacation allowed. Tickets could be purchased at the theater, or discount tickets could be purchased in advance which covered the cost of admission, as well as a bonus item such as a promotional pamphlet describing the featured movies, and various other special presents, such as posters, paper hats, cards, and toys. Additional items, including the official theatrical pamphlet and a variety of other commemorative goods, were available for purchase at cinemas or by mail during this period.

While looking at the Dragon Radar, Oolong notices that all of the Dragon Balls are starting to be gathered together. He and Gohan, who were also searching for the Dragon Balls, head out to investigate and end up at the Tsurumai-Tsuburi Mountains’ eternal wall of ice, where coincidentally, Piccolo is also training. Dr. Kochin summons Shenlong and wishes for Dr. Uiro’s lab to be released from the ice. The ice begins to break away and a building emerges. Gohan and Oolong look on in disbelief, when they are suddenly attacked by Dr. Kochin’s Biomen. Piccolo shows up to save Gohan, but is overcome by three mysterious fighters, while Gohan and Oolong escape.

Dr. Kochin and his Biomen soon appear at Kame House, and request that Kame-Sen’nin come with them. He refuses and easily defeats the Biomen, but Dr. Kochin kidnaps Bulma to force Kame-Sen’nin to go back with him to the lab. There, Kame-Sen’nin is forced to fight three bio-warriors, but it soon becomes apparent he’s no match. Bulma discovers that Dr. Uiro’s goal is to obtain the body of the strongest man so he can be revived. Bulma informs them that Son Goku is now the strongest man in the world.

Oolong informs Goku of the situation, and he heads out to find Bulma and Kame-Sen’nin. He arrives at Dr. Uiro’s lab and is greeted by Misokattsun, Kishime, and Ebifurya, Dr. Kochin’s three bio-warriors. Goku defeats Misokattsun by bursting through him with the Kaiō-Ken, but is then sealed up in ice by Ebifurya. Gohan and Kuririn arrive to back him up, but are at their wit’s end against Kishime. Using the Kaiō-Ken, Goku breaks free from ice and defeats the two remaining bio-warriors. Goku confronts Dr. Uiro, demanding he give Bulma back, but Dr. Uiro just wants Goku’s body.

Piccolo, who has been brainwashed by Dr. Uiro, appears and a battle between the two rivals commences. Gohan tries to stop Piccolo, but he simply swats Gohan away. Being unable to stop them from fighting, Gohan’s anger explodes, shattering Dr. Uiro’s brainwashing device on Piccolo. Dr. Uiro is stunned by Gohan’s power and decides he must fight Goku himself. He begins to break his robot body free from the wall, subsequently knocking Dr. Kochin down an energy shaft, killing him. Everyone watches on in horror, including Kuririn, who has freed Bulma.

The true battle begins, and Dr. Uiro seems to have the upper hand. Even the three-person Kamehameha of Goku, Kame-Sen’nin, and Kuririn has no effect on him. Soon, Goku and Piccolo are the only ones left able to fight. Goku resorts to using a Kaiō-Ken powered Kamehameha, which merely knocks Dr. Uiro into space. Goku begins to form a Genki-Dama, but Dr. Uiro interupts him before he can throw it by shooting ki blasts at him. The others fly up to distract him so Goku can successfully throw the Genki-Dama. Goku lets it fly and it’s a direct hit. Dr. Urio’s brain is destroyed and peace once again returns to Earth.

The orchestral score for this film, as with all Dragon Ball Z TV series background music, was composed by Shunsuke Kikuchi. It was recorded on 21 February 1990 at AVACO Studios in Kawasaki, Kanagawa Prefecture; pieces recorded for the film are designated by the numbering M9xx, where xx stands for the ordering of the track within the film itself.

The Dragon Ball Z TV series began making use of music from this movie with episode 47 (aired 09 May 1990), and continued to use it regularly. Dr. Uiro’s leitmotif, which runs through much of the score, is closely associated with the villainous characters of the Freeza arc: Zarbon, the Ginyu Special-squad, and (of course) Freeza himself. Perhaps the most notable of the pieces in the score, however, is the one that plays just before the end credits (M929); a mid-tempo, major-key piece, it effectively expresses the happiness and relief of the characters after Dr. Uiro’s defeat in the film. In the TV series, while not used often, it is closely associated with happy moments that conclude individual story arcs, such as at the end of the Bardock and Trunks specials, and in episodes 107 and 117.

[Uses in Kikuchi score of Dragon Ball Kai, if relevant]