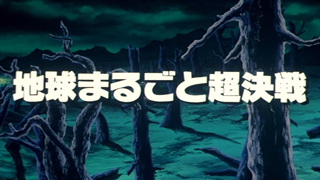 A Super Decisive Battle for Earth

The movie premiered as part of the Summer 1990 “Toei Anime Fair” (東映アニメフェア; Tōei Anime Fea) on 07 July 1990, which was additionally dubbed “Akira Toriyama: The World”, as the other two movies premiering at the fair were based on works by Akira Toriyama — Pink and Kennosuke-sama. The event’s name was once again changed for this season, this time from the “Toei Anime Festival” (東映アニメまつり; Tōei Anime Matsuri), which originates from the “Toei Manga Festival” that was established by Toei in 1969 as a way to showcase their popular children’s series as theatrical films during seasonal breaks in the school year. In Japan, almost all schools below the university level run a three-term school year (trimester system) with a vacation period of several weeks to a month at the end of each trimester: spring vacation, summer vacation, and winter vacation. The movies were screened together back-to-back in various cities across Japan, with a typical total running time of roughly three hours. Most festivals would last roughly one month, or as long as the seasonal vacation allowed. Tickets could be purchased at the theater, or discount tickets could be purchased in advance which covered the cost of admission, as well as a bonus item such as a promotional pamphlet describing the featured movies, and various other special presents, such as posters, paper hats, cards, and toys. Additional items, including the official theatrical pamphlet and a variety of other commemorative goods, were available for purchase at cinemas or by mail during this period.

Gohan, Kuririn, Bulma, and Oolong are spending a peaceful day camping, but that night a huge fire breaks out in the nearby forest. Using their ki, Kuririn and Gohan put out the fire and use the Dragon Balls to restore the forest. Unbeknownst to our heroes, the fire was started as a result of a space pod landing. The next morning, the space pod begins scouting the area, and is revealed to have been sent by a Saiyan named Tullece who has chosen the Earth to plant the Shinseiju (lit. “Tree of Godly Might”). The Shinseiju absorbs the world’s energy, storing it in its fruit, and whoever eats it is granted great power.

Tullece soon notices the young Saiyan Gohan and appears before him, trying to convince him to join and help him conquer the universe. Gohan refuses, so Tullece decides to kill him, but Piccolo intervenes. Unfortunately he is no match for the Saiyan and is sent flying. Tullece decides to have a little fun and creates an artificial moon, forcing Gohan to look at it and transform. Goku notices this and comes to help, only to be attacked by Gohan in Ōzaru form. Hire Dragon appears and calms Gohan, but after seeing this, Tullece shoots Hire Dragon. Gohan goes into a frenzy and quickly turns on Tullece. Tullece decides he has had enough fun and fires a massive ki attack at Gohan, but Goku severs his tail return him to normal just in time so that the attack misses Gohan.

Enraged at Tullece for treating Gohan like this, Goku quickly defeats Tullece’s minions and heads off to take on Tullece. Goku and Tullece’s one-on-one showdown begins and Goku has Tullece on the ropes. However, the fruit of the Shinseiju has finally developed and Tullece grabs one, taking a bite. With the sudden surge of power, Tullece quickly turns the tables on Goku, but the Z Warriors come to his aid. As they take on Tullece, Goku begins to form a Genki-Dama, but the Earth barely has any energy left.

Energy from the Shinseiju suddenly flows into Goku and the Genki-Dama is complete. With the remaining Z Warriors defeated, Goku confronts Tullece and each unleash their respective final attack. Goku’s Genki-Dama overwhelms Tullece’s ki attack and hits him head on, sending him flying through the Shinseiju. The massive Genki-Dama also destroys the Shinseiju and its energy is returned back to Earth.

With peace returned, our heroes enjoy another camping trip.

The following original character profiles were translated from Akira Toriyama: The World Anime Special (released in September 1990), along with additional character design comments from the movie’s character designer, Minoru Maeda, as published in the “Design Lab” section of the “Dragon Box The Movies” Dragon Book. The character descriptions are essentially verbatim from the theatrical program released with the film earlier that year; perhaps because of the yearlong festivities, each character is given a fairly detailed backstory, although this information is never brought up in the movie proper and is not repeated in later guidebooks.

The orchestral score for this film, as with all Dragon Ball Z TV series background music, was composed by Shunsuke Kikuchi. It was recorded on 22 June 1990 at AVACO Studios in Kawasaki, Kanagawa Prefecture; pieces recorded for the film are designated by the numbering M10xx, where xx stands for the ordering of the track within the film itself.

The Dragon Ball Z TV series began making use of music from this movie with the Bardock special (aired 17 October 1990, between episodes 63 and 64). Its use in the special is extensive, and the Shinseiju‘s leitmotif, which runs through much of the film, effectively becomes Bardock’s theme. In particular, the haunting vocal piece that plays in the movie as the world’s energy is restored (M1023) is perhaps better known as the music in Bardock’s death scene. Within regular series episodes, meanwhile, the music used at Shenlong’s summoning in the film (M1002) is closely, though not exclusively, associated with Cell; it plays at a number of dramatic points involving the character, perhaps most memorably being his death in episode 191.

[Commercial releases; “Dun-Dun-Dun” only on Ongakushū]

An unused piece, known by its call number (M1018) to have been recorded for this film, has been made several appearances in commercial releases (“Ongakushū” Track 4, “Daizenshuu” Disc 4, Track 24, Part A, “BGM Collection” Disc 3, Track 5, Part A), yet unused in both the film and the Dragon Ball Z TV series. Its first actual use within an animated Dragon Ball work came with the 2008 Jump Super Anime Tour special, as Goten and Trunks begin their fight against villains Avo and Cado. This is likely due to its presence on the aforementioned “BGM Collection” CD set, as all pieces used in the 2008 special are included there.

[“Marugoto”; who sung it, when/where it was recorded, notables among those who helped make it; Kageyama comments from Movie Dragon Book interview]