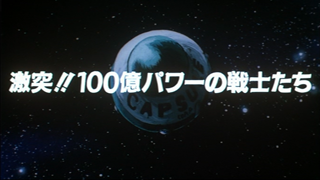 The movie premiered as part of the 1992 Spring “Toei Anime Fair” (東映アニメフェア; Tōei Anime Fea) on 07 March 1992, along with two other movies from the Magical Taluluto and Dragon Quest series. The event originated from the “Toei Manga Festival” that was established by Toei in 1969 as a way to showcase their popular children’s series as theatrical films during seasonal breaks in the school year. In Japan, almost all schools below the university level run a three-term school year (trimester system) with a vacation period of several weeks to a month at the end of each trimester: spring vacation, summer vacation, and winter vacation. The movies were screened together back-to-back in various cities across Japan, with a typical total running time of roughly three hours. Most festivals would last roughly one month, or as long as the seasonal vacation allowed. Tickets could be purchased at the theater, or discount tickets could be purchased in advance which covered the cost of admission, as well as a bonus item such as a promotional pamphlet describing the featured movies, and various other special presents, such as posters, paper hats, cards, and toys. Additional items, including the official theatrical pamphlet and a variety of other commemorative goods, were available for purchase at cinemas or by mail during this period.

One peaceful day the New Planet Namek is engulfed by the Big Gete Star, which begins sucking the energy from the planet. Back on Earth, Dende sees what is happening and immediately sends Goku and the others off to save New Planet Namek from this danger. Meanwhile, on New Planet Namek, robot soldiers begin hunting down all the Namekians in order to gather their energy. Some of the Namekians put up a resistance, but it only proves to be a futile effort. Just as the robots are about to finish off some of resisting Namekians, Goku and the others appear!

As the battle is about to begin, Metal Coola appears before them. Goku is shocked to see he is still alive, but vows to defeat him once again. While Goku begins his one-on-battle with Metal Coola, the others take on the robot soldiers. Piccolo soon figures out that by concentrating their ki at the moment of attack, they can easily pierce their heavy army. However, they are eventually captured as the increasing number of robot soldiers overwhelms them.

Goku and Metal Coola seem quite even, but after using both the Kaiō-Ken and Shunkan-Idō Goku realizes he is outmatched. With no other choice he finally transforms into a Super Saiyan. However, even his increased power and speed have little effect on Metal Coola, who can regenerate thanks to his mechanical self-repairing ability. Goku finds himself in dire straits, but at that point Vegeta appears and saves him, saying he will be the one to kill Kakarrot. The strong Super Saiyan combo quickly overtakes Metal Coola, and after using all of their strength they finally smash him to pieces.

The two Saiyans fall to ground, completely exhausted, but to their bewilderment they see they are totally surrounded by hundreds of Metal Coolas. Even though they are completely outmatched, the two will not go down without a fight, but are eventually captured. Inside the machine planet they find the core of Coola, who explains how he took over the Big Gete Star and used it to create mechanical duplicates of himself. Coola then quickly begins to drain their energy and the two scream out in pain. At the same time, Yajirobe and the others are about to be sawed up so that their energy can be absorbed, when the saw abruptly stops.

Coola appears to have drained all of Goku and Vegeta’s energy, when more energy suddenly explodes from the two. Their Super Saiyan energy quickly overwhelms Coola’s circuits and the Big Gete Star begins to collapse in on itself. Meanwhile, the others flee from the exploding machine planet to safety. Back inside Coola creates a mechanized body and rushes forward to finish of the duo himself, but with Vegeta’s help Goku is able to pierce Coola’s chest with a ki attack, blowing him up along with the Big Gete Star.

As the smoke clears, Goku and Vegeta fall back to the planet and crash head first into the ground. Yajirobe heals everyone with some Senzu and Goku is glad to see everyone else is okay. The Namekians thank him for all he has done, but Gohan wonders where Vegeta went. Goku says he must have taken off after being given a Senzu. In space, Vegeta is flying in a space pod, holding Coola’s main computer chip in his hand… He slams it closed, crushing the chip with a “Hmph!”

The following original character profiles were translated from Daizenshuu 6. Additional character design comments from the movie’s character designer, Minoru Maeda, have also been included as published in the “Design Lab” section of the “Dragon Box The Movies” Dragon Book.