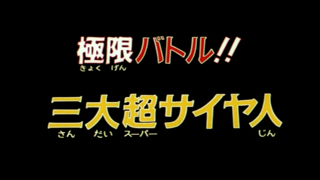 The movie premiered as part of the 1992 Summer “Toei Anime Fair” (東映アニメフェア; Tōei Anime Fea) on 11 July 1992, along with two other movies from the Dragon Quest and Rokudenashi Blues series. The event originated from the “Toei Manga Festival” that was established by Toei in 1969 as a way to showcase their popular children’s series as theatrical films during seasonal breaks in the school year. In Japan, almost all schools below the university level run a three-term school year (trimester system) with a vacation period of several weeks to a month at the end of each trimester: spring vacation, summer vacation, and winter vacation. The movies were screened together back-to-back in various cities across Japan, with a typical total running time of roughly three hours. Most festivals would last roughly one month, or as long as the seasonal vacation allowed. Tickets could be purchased at the theater, or discount tickets could be purchased in advance which covered the cost of admission, as well as a bonus item such as a promotional pamphlet describing the featured movies, and various other special presents, such as posters, paper hats, cards, and toys. Additional items, including the official theatrical pamphlet and a variety of other commemorative goods, were available for purchase at cinemas or by mail during this period.

Following the movie’s premiere, a “Summer Vacation Special” was broadcast on Fuji TV in an hour-long time slot to promote the movie. Hosted by the tuxedo-clad duo of Goku and Gohan, the special featured a compilation of footage, much like a clip show, from the movies up through Dragon Ball Z movie 7.

At the time of the movie’s premiere, both the Dragon Ball manga and Dragon Ball Z TV series were in the midst of the Artificial Humans story arc. In the manga, Cell had just absorbed No. 18 and was transforming into his perfect form, whereas in the animated adaptation Goku and Gohan had just entered the Room of Spirit and Time to train while Piccolo began his battle with No. 17 in hopes of destroying even one of the artificial humans in order to prevent Cell from reaching his perfect form.

On 01 July 1992, just prior to the movie’s premiere, Shueisha published the film animation comic for the franchise’s previous movie. The comic features a six-page section covering the current events and newly introduced characters of the Dragon Ball Z TV series, including a look at the Red Ribbon Army and the various artificial humans created by Doctor Gero. For promotional purposes, the section also includes a small half-page segment showcasing Nos. 13, 14, and 15, artificial humans set to appear in the “upcoming” summer theatrical film.

In a hidden laboratory in the mountains, Dr. Gero activates Artificial Humans No. 17 and 18. However, his creations turn against him, killing him with a single kick. The oil from his crushed head slowly trickles down through the cracks to the depths of the laboratory, where a computer continues to work diligently on Dr. Gero’s other creations…

It is sometime in the near future, and the Son family and friends are spending a peaceful afternoon out on the town shopping in West City. Meanwhile, two strangers enter the city and begin causing havoc, destroying nearly everything in their path. As the Son family is eating, the building they are in is suddenly attacked, as it turns out the two are after Son Goku. When Goku sees that ordinary people are being attacked in his name, he becomes furious. Trunks comes to Goku’s aid, and the two lead the artificial humans out of the city. And so, the battle begins in the chilling glaciers to the North. But it appears another artificial human was waiting for them, No. 13. Goku faces off against the heartless No. 13, while Trunks deals with No. 14 and No. 15.

The battles are so incredible that Gohan and Kuririn, who followed Goku from the city, cannot get involved. The power of the artificial humans nearly overwhelms the super warriors, but at that moment, Vegeta arrives and saves Goku. From there, the battle becomes a free-for-all fight, with Goku vs No. 13, Trunks vs No. 14, and Vegeta vs No. 15. However, although the numbers are now even, the three finally must transform into Super Saiyans to evenly battle the artificial humans.

At the same time, Piccolo arrives and joins the battle. With Piccolo’s help, Trunks and Vegeta defeat No. 14 and No. 15. Now only No. 13 is left, but No. 13 uses instructions from the lab computer and absorbs the computer chips and energy reactors from the defeated No. 14 and No. 15, transforming into Merged No. 13. Vegeta and the others attack the new Merged No. 13, but their attacks are completely ineffective against him. Even Goku fails and is completely defeated, returning to his normal state. However, Goku starts collecting energy to create a Genki-Dama, thinking it’s their last chance to win. In order to give him the time he needs, Vegeta, Gohan, Trunks, and Piccolo challenge Merged No. 13, but are defeated one after the other.

At last, the Genki-Dama is complete, and at the same time Goku transforms into a Super Saiyan again. However, because of the evil heart of the Super Saiyan, Goku cannot use the Genki-Dama, which is only available to those with an innocent heart. The Genki-Dama begins to vanish, but Goku quickly absorbs its energy. With the extra powerful energy combined with his own, Goku attacks the Merged No. 13 and he is finally annihilated. Peaceful days return once again to the Earth…

While not contributing to the movie’s story development, original author Akira Toriyama provided original character designs for the three artificial humans, which were later printed in the “Gallery of Akira Toriyama” section of Daizenshuu 6. The section notes that at the time of Akira Toriyama’s designs the names of Nos. 14 and 15 were reversed. However, the two names were later swapped by the animation staff for unspecified story development reasons. These designs were later reprinted in the “Dragon Box The Movies” Dragon Book, Chōzenshū 3, and the 30th anniversary Chōshishū –Super History Book–. While Chōzenshū 3 is a near identical reprint of Daizenshuu 6, the other guides featured new full-color versions of No. 13 that had never previously been published. 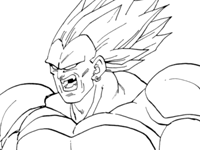 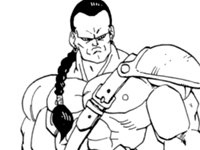 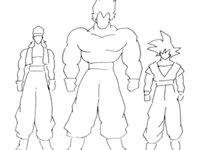 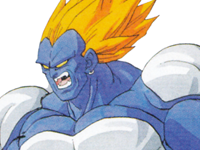 The following item details were translated from the “Item Dictionary” section of Daizenshuu 7:

The events of the movie take place on Earth, primarily in its northern region. The map below represents the locations in general chronological order of these events, from Doctor Gero’s death in his laboratory to the great battle in the northern glacial region.

The orchestral score for this film, as with all Dragon Ball Z TV series background music, was composed by Shunsuke Kikuchi. It was recorded on 18 June 1992 at AVACO Studios in Kawasaki, Kanagawa Prefecture; pieces recorded for the film are designated by the numbering M14xx, where xx stands for the ordering of the track within the film itself. Certain pieces of this music have been made available on three CD releases:

The table below outlines all of the musical pieces used in the film, and which (if any) CD releases contain said music. Most Dragon Ball background music collections compile multiple pieces of music into a single track (or suite); as such, individual pieces tend to not have their own unique titles, but rather exclusively have catalog numbers. The CD listings below indicate which disc (if applicable), which specific track, and which individual piece within that track’s suite of music is that scene’s corresponding background music.

Following each film’s theatrical run, its musical score was eventually incorporated into the TV series to supplement the show’s existing catalog of background music. The first episode of Dragon Ball Z to feature music composed for this film was episode 161, which plays as Vegeta continuously attacks Perfect Cell high up into the sky. As with other films’ musical scores, some pieces would go on to become synonymous with a specific character or scene within the TV series. For instance, much of the music used during Gohan and Cell’s Kamehameha struggle at the end of the Cell Games comes exclusively from this film’s musical score. Not only was the film’s musical score utilized throughout much of the Cell arc, but it remained in frequent use through the remainder of the TV series.

As with most of the preceding Dragon Ball Z movies, this movie features an exclusive ending theme song with vocals from singer Hironobu Kageyama. Titled “On the Brink –The World at its Utter Limit–”, the theme song was written by Chiho Kiyo’oka and arranged by Kenji Yamamoto, with lyrics provided by Dai Satō. In addition to the main vocals from Hironobu Kageyama, supporting vocals are provided by singer Yuka Satō, who is known primarily by her stage name, “YUKA”. The song was first released as part of the Dragon Ball Z Hit Song Collection 11 album on 01 July 1992, just prior to the movie’s premiere. It has since been released on multiple albums and compilation sets.

“On the Brink –The World at its Utter Limit–”

« Previous Movie
Movie Guide
Connect With Us
Support Us
Your support for Kanzenshuu is what keeps us going. You can help by donating to us directly, or by shopping online at certain retailers through our affiliate links below. Every bit counts and helps contribute to our server fees and bringing you new site content, reviews, and contest items.