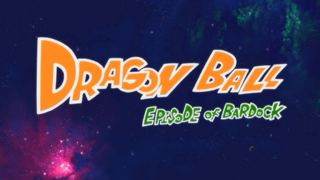 The new story begins where the original ended, with Bardock’s insubordinate attack on Freeza. Bardock screams at Freeza that they are allies, but Dodoria and Zarbon laugh this off — the Saiyans were just being used all along. Freeza states that the race has become an eyesore and must be eradicated to ensure that the “Super Saiyan” from that ridiculous legend will never appear. Bardock lets out a horrible scream as Freeza’s blast engulfs both him and the planet…

Bardock awakens to find himself in a strange place, convinced that he was caught in the explosion of Planet Vegeta. Where is he? The landscape and the color of the sky remind him of Planet Vegeta, but something is different. Two creatures, Ipana and Berry, approach Bardock (who has never seen this race before in his life). Ipana is the village doctor, and along with his shy son, heal Bardock a bit with their village’s secret medicine. Whatever the liquid is, it seems to be healing Bardock, who recognizes it as somewhat like the liquid from their own medical machines. Ipana says that with injuries as harsh as Bardock’s, it will likely take him half a month to fully recover. Ipana found him collapsed on the outskirts of town, and dragged him all the way back. Bardock is not from Planet Plant, is he? Much like how Bardock does not recognize Ipana’s race, Ipana is equally puzzled about Bardock. “Planet Plant”… Bardock thinks to himself that this was supposed to have been Planet Vegeta’s original name, but this cannot be the past…! Ipana gives Bardock something to eat, but the noise from a spaceship steals their attention.

An alien named Tobi cannot believe that “Chilled-sama” has his eyes on such a pathetic planet… but regardless, he declares that from here out out, they are the new rulers! Along with Cavira, Tobi notes that Bardock appears different from the others (who thinks to himself that these guys do not look like Freeza’s underlings). Cavira goes to make an example of Bardock but is made quick work of by the brutal Saiyan. Bardock strains himself due to his prior injuries, but still manages to take out Tobi… making him the village’s savior in the process! The mayor thanks him, but Bardock wants nothing to do with them, saying it makes no difference to him whether they live or die. Bardock camps out by himself, still wondering where he is. He was just fighting Freeza, but cannot remember anything after the explosion. Berry sneaks up toward Bardock with some food, but Bardock threatens to kill him if he doesn’t scram. Ultimately, however, Bardock eats the free food.

Ten days after losing contact with Tobi and Cavira, Chilled decides to check up on Planet Plant. One of his henchman states that they have completely lost sight of the two, and have no idea where they might be. Even though the henchman promises to continue searching, Chilled decides to go have a look for himself. It is hard to believe that there might be anyone out there foolish enough to oppose him.

Chilled and the henchman approach Ipana’s village, saying they are members of the “Space Police”, protectors of peace throughout the entire universe! Evildoers have come to ransack the planet for its abundant resources, and they have arrived to stop them — if a pair of aliens have come recently, they were probably the ones. One of the Plantiens notes that the two are no more thanks to a guy named Bardock who took care of them and flew off. Chilled offers a reward to anyone who tells him where Bardock went, but Berry is concerned about this new guy…

Berry runs off to find Bardock, telling him about the new aliens that arrived and how he has a bad feeling about them. Off in the distance, Chilled is destroying the village! Chilled laughs to himself about the “Space Police” lie, bestowing death upon all for not finding Bardock. Chilled asks for some of the healing liquid from Ipana, who refuses. Chilled will make him suffer, though not kill him, just to prove a point about going against him. Bardock suddenly shows up; as Ipana states his name, Chilled realizes that this is the guy who took out Tobi and Cavira.

Bardock screams Freeza’s name and attacks Chilled, who cannot believe a shrimp like this just came after him. Chilled grabs Bardock saying how he keeps going on and on about this “Freeza”, but he is Chilled, the mightiest pirate in the universe! Bardock is in a huge pinch now courtesy of Chilled’s overwhelming power. Chilled says that he was curious how strong Bardock actually was since he took out his henchman, but this is all somewhat anticlimactic. Berry comes to stop Chilled, but it is no use. Berry is wounded as Ipana looks on, but Chilled simply wonders to himself who the trash was.

Bardock starts muttering to himself about being pathetic, and that if he only had more power he would not have lost back there. As Bardock screams out Freeza’s name yet again, he transforms into a Super Saiyan! Chilled laughs to himself, saying that Bardock should not get cocky just because he has gold hair now. Chilled fires a series of blasts and continues laughing, saying that the hair apparently did not change a thing, since all of the blasts hit him head-on! When the dust clears, however, Bardock is still there. Chilled gasps, wondering who this guy is. Chilled attacks Bardock head on, but can’t land a blow. He finally forms a giant blast to destroy the whole planet, but his ki is pushed back by Bardock’s own blast, which continues pushing through to envelop Chilled. Bardock has done it! He has defeated Chilled and saved both the village and the planet!

Chilled is found by his henchmen and is being treated for his injuries. The henchmen wonder what happened, and Chilled mutters with his last breaths that they should tell his clan about these people called “Saiyans” who can become gold. Back on Planet Plant, Bardock has finally defeated his demons and walks off into the sunset, a hero.

All credits listed below are as originally presented in the feature. Unlike the traditional credit structure found in typical Dragon Ball episodes, this feature does not contain any opening credits. All original credit errors have been corrected to maintain accurate spellings throughout the site.

A Cooperative Production With