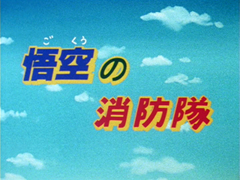 A girl and her younger brother are in a public park with some small firecrackers set up to be launched. The boy seems weary about it, but the girl convinces him to take the matches, and right as he’s about to light one she screams out and scares the crap out of him! Over in another section of the park Goku is practicing his martial arts, and we see a bunch of fireworks launching into the sky. The brother and sister agree that it was a good idea to launch them, even though we see that one has landed in a nearby trashcan. As Goku is walking by, a stray firework flies by and almost hits him, which he runs over to and stomps out. Just as the brother and sister are about to go home, they see that the nearby trashcan has now caught fire, and Goku comes flying out of nowhere with a bucket of water to put it out. Goku very sternly tells them that fireworks are not a toy and that they should only be used under certain circumstances (in an open area with some emergency water nearby, etc.). As they are discussing this, they hear some sirens from a fire engine in the background and run off to see what’s going on.

They arrive at a house that’s on fire, and Goku works crowd control as the fire crew (Kame-Sen’nin, Kuririn, and Yamcha) put the fire out. Once the fire is out, Yamcha explains that this fire was started by a cigarette, and Kame-Sen’nin goes on to explain other common ways that fires are started (leaving food unattended on the stove, leaving an iron face-down on the ironing board, and children playing with matches). The brother and sister seem to be learning a lot about fire prevention today! Later that night, at the house of the brother and sister, they scold their mother for leaving the gas to the hotplate on, and their father for smoking in bed. The following morning they head off to school, and reiterate some fire safety tips to each other. Meanwhile, over at Bulma’s high-rise condominium, she puts some cooking oil in a pan to make some fried eggs. As she’s doing this, her cat start meowing for food, and Bulma leaves the bottle of oil with the lid open next to the stove.

Back in the streets, the young boy suddenly seems to trip, and the sister has a good laugh, but they both suddenly realize that an earthquake has started! We see scenes of chaos in grocery stores and in the streets, and back in Bulma’s condo, the earthquake causes her to fall and smash her head on a cabinet. As Bulma goes unconscious, the cooking oil that was next to the stove spills over onto the hotplate and catches fire. As the earthquake ends, the brother and sister notice a fire at the condo and head to the nearest payphone to dial “119” (Japanese version of “911”). The fire department arrives (now with Goku as one of the crew), and sees that Bulma is hanging over the balcony trying to get oxygen. They send up the ladder on the back of the truck, but it’s too short and can’t reach the top balcony. Goku has no choice but to fly up there using Nyoi-Bō.

Once at the top, Bulma explains that her cat is still inside and Goku sends her down on the Nyoi-Bō. Goku heads into the burning building and finds the cat huddled in a corner. Moments later, Goku comes flying out of the building, cat in hand, and lands on the ladder next to Kuririn. After putting out the fire, they all go over the importance of fire safety once again, and everybody learns a valuable lesson! The fire safety parody of “Makafushigi Adventure” then begins to play.

The following excerpt was translated from pages 122 to 123 of the Dragon Ball DVD Box Dragon Book:

The special videos “Goku’s Traffic Safety” and “Goku’s Fire Fighting Regiment” are both very rare productions designed to be educational films. They were both completed in June of 1988.

An older sister and younger brother are playing with fireworks and nearly set the park on fire, but Goku from the town fire fighting squad helps rescue them from this pinch! Bulma’s condominium breaks out into flames. The fire truck’s ladder doesn’t reach, and Goku has to use Nyoibō to make the rescue! Although “Goku’s Traffic Safety” can be a part of “Dragon Ball”, for “Goku’s Fire Fighting Regiment” you have to consider that for just one episode, even though all the characters appear to be the same, the story takes place in another world. Although they say it is “West City”, the setting is actually that of present-day Japan, and instead of being martial artists, Goku, Kame-Sen’nin, Yamcha, and Kuririn are all staff members of the fire department and wear fire proof outfits. By the way, the elder sister of the older sister and younger brother is named Chao, and is voiced by Yuriko Yamamoto. Chao comes from episode 79, “Kinkaku and Ginkaku’s Man-Eating Gourd”, and even resembles how the character looks. Could her identity possibly be of the same character, too? A fire prevention parody version of “Makafushigi Adventure!” flows through this ending as well. Listen to them let loose!

All credits listed below are as originally presented in this public service announcement. The credits for this features are listed in the traditional Japanese fashion of top to bottom, right to left (something not seen very often for credit rolls). For more information and a complete listing of the series staff, visit the Production Guide.

Movie Guide
Connect With Us
Support Us
Your support for Kanzenshuu is what keeps us going. You can help by donating to us directly, or by shopping online at certain retailers through our affiliate links below. Every bit counts and helps contribute to our server fees and bringing you new site content, reviews, and contest items.