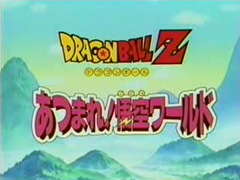 Gohan wakes his dad up, saying they have to meet up with Bulma and the others. Goku does not seem to want to wake up despite all of Gohan’s attempts, so Gohan tosses out a capsule and the resulting explosion is finally what wakes Goku up. Gohan tells his dad that the person with the telephone is watching them! Goku explains that when the phone rings, you should answer it.

Goku calls you up and says hello, and thanks you for helping him. He explains that when you see the Terebikko symbol, you can talk to the person on the television. Gohan once again says that they are supposed to meet up with Bulma and the others. Goku says they will go to Kame House to meet up with everyone, and you can come, too. They return the phone to its capsule form, rush outside, and blast off into the distance.

At Kame House, Goku and Gohan have arrived. Bulma explains that Trunks has used his vehicle to come back to the past and visit with everyone for the day. Kuririn asks Bulma which vehicle that is, so Gohan bursts out the telephone to ask you. Kame-Sen’nin pops out to say hello to all the children, but Bulma pushes him out of the way. Goku calls you up and asks which vehicle Trunks used:

Trunks brings his time machine out from his own capsule, while Bulma calls you up on the phone. It’s everyone’s favorite Bulma! She says you will be able to answer questions with the phone and says goodbye to you. Kame-Sen’nin explains that there was a point in time when “Muten Rōshi” was considered the strongest in the world! Goku asks if he wants to join them in the time machine, but he says he will sit this one out. Goku asks Trunks to install the Terebikko into the time machine, and they are off!

As they travel through time, Trunks explains that they should not interfere with the past, since it may inadvertently change the future. In fact, it is possible that some of them might not even be born! They agree, and land at a point in time when Goku and Kuririn were training with Kame-Sen’nin. Kuririn notes this to Goku, who has wandered outside the ship and is patting his younger self on the head. Trunks rushes through and smacks Goku out of the way, explaining that he cannot do things like this! The younger Goku wonders who that older man was.

Kuririn has a question for you! What did Muten Rōshi make them do to get so strong?

Gohan asks if that is how Muten Rōshi got the name Kame-Sen’nin (kame = turtle; sen’nin = a type of semi-mystical hermit/teacher). Goku says it was because of that tough training that they were able to partake in the Tenka’ichi Budōkai. Bulma says she remembers that, and asks Trunks to head there.

They arrive high above the ring of the 21st Tenka’ichi Budōkai. Trunks (having never actually seen the tournament before), asks if this was the place. Goku explains that you lost if you stepped out of the ring or fell unconscious. The fight is about to start: it is “Jackie Chun” vs Goku! Kuririn calls and asks you who “Jackie Chun” was in disguise:

Jackie uses his Bankoko Bikkuri Shō to freeze Goku up in the air, but Goku notices the full moon! Goku calls you up and asks what Saiyans turn into when they see a full moon:

Kuririn says now the terror begins! What is going to happen to those Saiyans there in the time machine with him, now?! Goku explains that none of them have their tails anymore, so they are OK. Trunks says there is such power, and now he understands the true nature of the Saiyans. Down below, Kame-Sen’nin bulks up and is about to use his ultimate technique! Kuririn calls you up to ask what this technique is used to destroy the moon:

The gang travels off in the time machine again, while Trunks asks who won the tournament. Kuririn explains that Jackie Chun / Muten Rōshi won. Trunks is impressed that someone could beat Goku! Goku says the old man was very strong, but Bulma retorts that now he is just a dirty old man. Back at Kame House, Kame-Sen’nin sneezes. He brings out his own Terebikko, and decides to call you up! He asks what “Kame-nīchan’s” ultimate technique is, but finds out that Goku and the gang already covered that with you. He asks if you think you know all of the Z Warriors’ ultimate techniques, and will review them with you. First up, Goku learned the Kamehameha from him. To use it, you must concentrate all of your ki into a single point. Later, Kaiō-sama taught Goku the Kaiō-Ken as well as something else. What was that other technique?

Kame-Sen’nin showcases the Makankōsappō and asks who uses this attack:

Piccolo can use several techniques that gather the body’s ki into these beam attacks. Not even Goku can block the Makankōsappō! Kame-Sen’nin asks if you want him to quiz him more, but he hears someone’s voice calling to him.

Piccolo Daimaō tries to fly away, but is caught in Kame-Sen’nin’s Mafūba. Unfortunately, he misses and falls over dead. Everyone is really sad, and Gohan wonders if Piccolo was such a terrible monster. Goku explains that afterwards he stole the last Dragon Ball, summoned Shenlong to wish for eternal youth, and then killed even the dragon. Gohan is shocked! Goku says not to worry, since the Piccolo they know now is much nicer. Bulma also explains that everyone was revived.

The gang arrives at God’s palace, and looks down below as Goku trains with Mr. Popo. God emerges from inside, and Goku calls you up to ask who God looks like:

Trunks says it must be exciting for Gohan to see the origins of his mentor. Gohan says it is, but he has mixed feelings about it. Trunks says that he, on the other hand, has yet to see his father’s past. Bulma laughs, and Goku says they are off to see the first meeting with Vegeta!

In the past, Vegeta blasts off into the sky to blow up the planet. Goku calls you up to ask what the name of this attack was, which resembles one of their own:

Goku’s Kamehameha and Vegeta’s Garlic-Ho clash, and everyone takes off in the time machine again. Bulma suggests they see Planet Namek next, since they have not seen Freeza on their time-travel journey. They arrive in the past directly in front of Porunga, who Trunks has never seen before. Gohan explains that this is the Shenlong of Planet Namek. Bulma says she did not expect him to be so large. Kuririn explains that back then they managed to summon Porunga without either Vegeta or Freeza noticing. Goku says that Porguna was larger than Shenlong, but there was another difference. Kuririn calls you up to ask what this difference is:

Goku says this allowed Piccolo to be brought back to life and transported to Planet Namek. Gohan says afterward Freeza was enraged that he did not get to make his wish. Down below, Freeza tells everyone that he is going to destroy them and begins to transform. Goku calls you up and says Freeza has many forms, but which is his ultimate form?

Kuririn says that right after these events Goku became a Super Saiyan and a giant battle took place. He asks that before that happens, could they please return (with an inference of the reason being that the catalyst for this event was his own death)? The group returns to the time that Trunks first arrives to kill Freeza and King Cold on Earth. Goku tells Trunks that he is very strong, and Trunks apologizes for killing Freeza instead of letting Goku do it, inadvertently changing history in the process. Goku says it is completely OK. Kuririn says they have seen some wonderful events, but maybe it is time to return home.

The gang arrives back at Kame House, and Kame-Sen’nin runs to them saying something is terrible. People are disappearing in the Western Capital, and “something” is out there. Bulma says the Western Capital is far away, and the group flies off.

Cell has arrived, declares he will absorb Artificial Humans #17 and #18, and then defeat Son Goku. The two are absorbed while the gang is in the process of flying out there. Trunks says it is possible that #17 and #18, who destroyed his future, may have finally appeared here. Goku is not sure, but can tell it is extremely powerful. The gang arrives in a barren wasteland where Goku felt the ki, and Cell (now in his “perfect” form) welcomes them and introduces himself. Goku says that if he insists on doing this, they have no choice but to defeat him. Trunks says that they cannot see Cell clearly because of the sunlight, so they will call you to ask what Cell’s “perfect” form looks like:

Cell jumps into the air and attacks the group. Goku begins to trade blows, and everyone is swatted away by Cell’s force. Cell smirks, and Goku turns Super Saiyan to begin his assault again. Cell says he will use a special attack, the Zanzōken. Goku says that Cell has split into four, and asks you to pick the real one on the phone (though the choice is irrelevant).

Goku thanks you and says that is the one he would pick, too. Goku rushes in and punches Cell in the face. Cell says he needs to retreat and build up his strength. Kuririn says that Goku has become incredibly strong, and Cell is running away. Goku says he will return even stronger. He welcomes this, and says they will become even stronger. Goku says to you that next time Cell returns, he promises they will defeat him. With the help of his friends, he can handle anything! 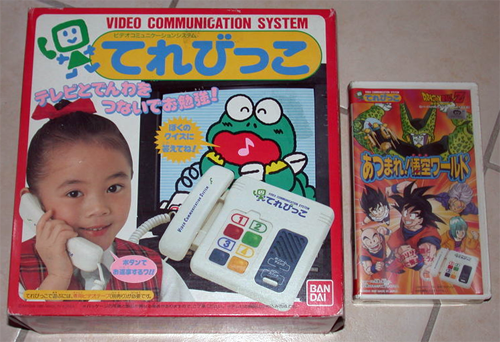 All credits listed below are as originally presented in the feature. Unlike the traditional credit structure found in typical Dragon Ball episodes, this feature does not contain any opening credits. All original credit errors have been corrected to maintain accurate spellings throughout the site.

The cast credits are listed in rough order of introduction within the feature. For more detailed information about the series cast, visit the Cast Guide.