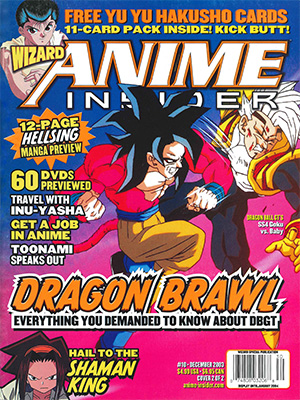 Return of the Dragon

Last year’s Dragon Ball Z: Budokai answered the many prayers of fans for a modern DBZ videogame. But DBZ: Budokai 2, due this December from Atari for PS2, is like a wish answered by the Dragon Balls themselves.

Budokai 2 ups the visual ante with “Toriyama-shading,” a visual application that makes the game look just like the anime instead of a videogame. The fighting engine has been tweaked to more easily perform signature character attacks, and players can even control the size of Goku’s patented Spirit Bomb move. Budokai 2 also adds destructible environments to fight in and toss your opponent through.

And there’s plenty of opponents to choose from. Packing 34 fighters from the show, including new additions like Android 20, Kid Trunks, Goten, older Teen Gohan, Videl, Supreme Kai, Dabura, Majin Buu, Super Buu, and Kid Buu. But using the Fusion technique from the Buu saga, players can create new heroes, including some never-seen in the actual anime.

The story option has also been overhauled. “There’s a more open-ended mode called ‘Dragon World,’ which plays out like a board game,” describes Christopher Lundeen, Atari associate producer. “When the player’s character pieces make contact with the computer’s, a fight ensues. The overall objective is to collect the seven Dragon Balls over nine different maps.” All these improvements have been made for the fans, promises Lundeen.

“Like any series out there with hardcore fans, it is very difficult to satisfy them,” says Lundeen. “But we can come close.” 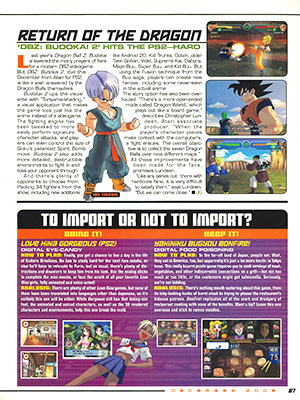