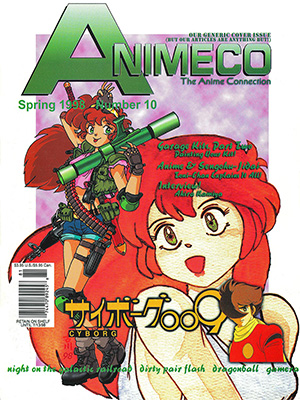 For those who don’t know already, Dragon Ball and Dragon Ball Z is a fast-and-loose manga version of the well-known (in Asia anyway) legend of The Monkey King. (See issue #2 of Animeco for a more detailed low down about Dragon Ball).1

After consulting with our resident Dragon Ball fan, I’m told that besides being printed in Japanese order (panels read right to left, starting from what we here in the US would consider the back of the book), I’m also told the translation is pretty good too.

By the time you read this, several issues of the manga will be out.2 One of the things you will notice about it is it reads totally backwards from most regular comics out there. No doubt this was one of the conditions Akira Toriyama made before he would allow Dragon Ball to show up here. Don’t believe me? A video game magazine at one time wanted to use a picture featuring characters he designed for Chrono Trigger on the cover. When the magazine found out how much Mr. Toriyama would charge for the privilege, they went with another game (Lunar: Eternal Blue).

Oh, did I like the series? You bet! However, I must admit to liking Dragon Ball over the more popular Dragon Ball Z, since characters with near god-like powers almost always bug me. 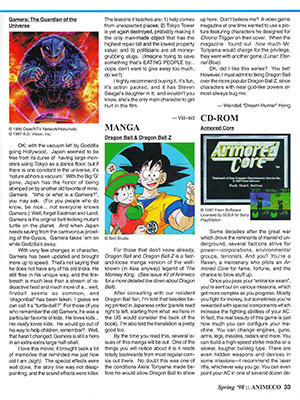 1 A long-form feature article on the series, which we have also transcribed for our archive.
2 Viz began releasing their English translation of the manga — split into Dragon Ball and Dragon Ball Z series — back in March 1998.
Transcription & Notes: VegettoEX
« Previous Page
Press Archive