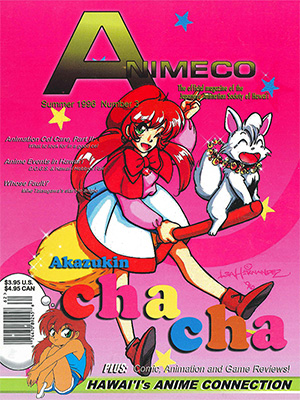 The Cure for the No More Dragonball Z Blues

A summary and review of Dragonball GT

Like many people out there, I was devastated when I heard that Dragonball Z was ending. Even after I had read the last issue of the manga and had watched the final episode, I was still in the midst of denial. But finally, realization set in and I was even more depressed than ever. It was then, in the deepest moments of my depression, while re-watching the last episode, that I once again felt new hope. I saw the preview for a new Dragonball series and in early April, I had the privilege of being (I believe) one of the first people in Hawai’i to watch Dragonball GT.

Dragonball GT is the newest chapter in the Anime/Manga series created by Akira Toriyama. This new series features some new faces and a few old ones too. Dragonball GT takes place about six or so years after the end of Dragonball Z. The main characters are Son Goku, Trunks, and Pan all of which have aged appropriated and have gotten younger. Wait a minute, did I just say younger? Well wait a paragraph or two and I’ll explain.

The series opens at Kami-sama’s (God’s) palace. It is here that Son Goku and Uub have spent the past few years in training. We get to see that contrary to what Piccolo said to Gohan in the beginning of Dragonball Z, Goku is one heck of a trainer and Uub has become a well disciplined fighter. After a few spiffy fight scenes we switch to a outside view of Kami-sama’s palace where we discover three robots making an ascent up the side. After a few mishaps, the mechanical trio makes its way to the top. The canopies swing open and when to [sic] smoke clears, we are greeted with sight of a aged Pilaf-sama accompanied, as always, by his two faithful lackeys. (Pilaf-sama was a re-occurring bad guy, thing or whatever, from the original Dragonball series).

Decades of searching for the Dragon Balls, has lead him to the very place of their creation. The three of them quickly spread out and in a remote corner they find seven Dragon Balls. Mad with glory Pilaf-sama fails to notice that there is something different about these Balls. Red in color, they lack the glow of the regular Dragonballs. Even with the fact pointed out to him, Pilaf doesn’t care. Removing the balls from their pedestal he arranges them on the floor and summons the mighty Shen Long. But when he appears we discover that these were indeed not ordinary Dragonballs. For not only is this Shen Long ten times bigger then [sic] he should be, he is also Red!. [sic] It is the great Shin Shen Long and he dwells in the God’s Dragonballs. Pilaf has just messed up royally.

As fate would have it Goku and Uub have finally finished training just a few minutes earlier. While walking around, taking a breather, Goku notices the black sky and sees the awesome Shin Shen Long. Going to investigate Goku stumbles across Pilafs [sic] little trio. Remember [sic] how much of a problem Goku was when he was little and realizing he would be more of a problem as a grown up. [sic] Pilaf accidentally says out loud, “I wish you were young like when I first saw you.” A deep voice answers from overhead, “Easily done.” And within a few seconds Goku is little again.

From there we skip to Satan City where young Pan is taking a stroll through town with a school mate. Although she has got a lot older she hasn’t gotten much taller. Anyway, being kids with some free time to kill Pan and her friend decide to see a movie, only to be stopped by a police blockage. Is [sic] seems that the bank next to the theater is being held up, so no one can go near it. Pan, being part Saiyajin and needing some practice, decides to remove the bank robbers so she can go see her movie.

At that same time young Goku, who has been distracted from his 55th bowl of Saimin, steps out of a nearby noodle house. Once outside, he sees a young girl who looks a little familiar, rushing into battle. Being a hero at heart, Goku leaps to her aid, only to be batted aside by the girl who shouts that it’s too dangerous for a kid like Goku to be in a place like this. In a few minutes, the battle is over. With the bank robbers defeated, Pan makes a startling discovery. The little kid that just got in her way isn’t just some kid; he is her Jiisan (grandpa) and for some reason he’s younger then [sic] her!?!?!?

Back at Goku’s house, things get even more startling. While trying to explain things to Chi Chi, Goku is contacted by Kaiyoh-sama. Kaiyoh-sama tells Goku that because Pilaf used the Dragonballs, the Earth will be destroyed in one year unless all the Dragonballs can be found. One might think, “Well gee … with the Dragon Radar they can probably find them in less then [sic] a month.” Well normally … yes, but Kaiyoh-sama related some additionally drastic news. Earth is not the only planet with Dragonballs. In fact there are seven sets of Dragonballs, each one located on a different world.1 To add more fuel to the fire, Kaiyoh-sama doesn’t know which are the other six worlds that have Dragonballs. Finally, to top it off, unless all seven sets of Dragonballs are found in a year, these other six worlds will also be destroyed.

With that in mind, it is decided that Goku, Gohan2 and Trunks will head off in search of the other six sets, while everyone else gathers the Dragonballs on Earth. This seems fine to everyone but Pan, who decides to make some last minute adjustments to the passenger list. This is done by sneaking aboard the spaceship while Goku and Trunks are waiting for Gohan and hitting the launch button before anyone can stop her. With Son Goku, Trunks, and Pan rocketing off the [sic] save the Earth (and those other six worlds), so begins the newest chapter in the Dragonball saga.

I would like to close by saying, that all the information presented in this article is based off my knowledge of Japanese. While the main plot is correct some of the finer points may be off. Well, anyway, that’s a look at Dragonball GT. I hope you get a chance to see it soon. Oh yeah, just one more thing; In last issue’s Dragonball article, the name given for the Vegita, Son Goku Fusion using the Potara is spelled wrong. It should be ‘Vegitto’ not ‘Vegitt’.3 I know it’s nit-picking but…. Anyway, keep an eye out for Dragonball GT. The Manga should be out soon4 and believe me, it’s worth it. Well , that’s all JASHers.5 See ya next time! 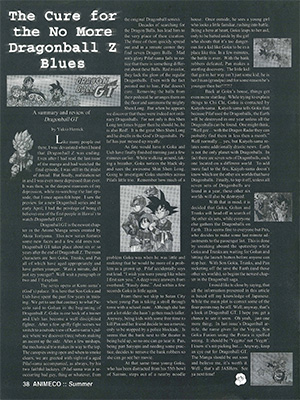 1 As the author later concedes, they may not have gotten all of their information 100% accurate. All things considered, this is really the only significant piece they misunderstood: it’s not that there are seven sets of Dragon Balls out in the universe, but rather each Dragon Ball of this one new set scatters to a different planet.
2 The group was actually going to be Goku, Goten, and Trunks, but Goten is hanging outside the ship talking on the phone when Pan blasts off.
3 Referencing the Spring 1996 issue’s feature article on Dragon Ball. “Vegitt” and “Vegitto” (as well as “Vegetto”, etc.) are legitimate transliterations of ベジット (bejitto), with the modifier character ッ emphasizing the hard, double-consonant ending sound in ト.
4 The author may be confused over the type of production Dragon Ball GT received, which was an anime-only television series, as opposed to being both a manga and a television series.
5 The “Japanese Animation Society of Hawaii” responsible for the magazine’s publication.
Transcription & Notes: VegettoEX
« Previous Page
Press Archive