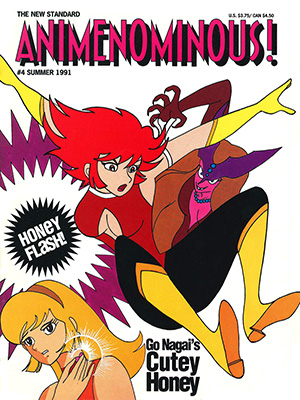 When most people see Akira Toriyama manga or film, it’s quickly dismissed as “stuff for children.” Engaging in this practice eliminates at least three interesting and strange shows. For the record, the first that anyone over here heard of Mr. Toriyama was with the show Doctor Slump. Watching that show, one can easily see the roots of Dragonball (and Dragonball Z) in its attitude and execution.

The show (and manga) of Dragonball revolves around a traditional figure from Chinese literature named Goku Son1. He was found high on a mountain peak by Gohan Son, who quickly adopted him and raised him as his own, and as the strange infant matured he was taught the Martial arts. Goku learned quickly; his stamina and ability were unbelievable, and he watched his enemies carefully so that he could learn from them. He has literally been trained by the best of warriors of all time: he spent some time dead and was trained by Master Kaiyo until being returned to life by the Dragonballs. All that aside, Goku is naive and trusting, prevented by his code from killing. Gohan (and even Goku himself) did not suspect his true heritage, and it is only in the later series that this begins to reveal itself.

Goku is the last member of an alien race called the “Saiyans“, a rather unpleasant warrior race who respected only power. According to the story, he too would have been rather nasty were it not for the fact that he was injured upon landing, and the person who found him was a kind and gentle sort who was quietly living out his days in the mountains. Goku was the last son of a very wealthy and powerful family (you can start rolling the Superman credits and music any time you’re ready)2 who was sent to Earth where he would be safe. Safe, that is, from the forgotten race that was vanquished by the Saiyans…safe from the somewhat more potent alien race, the “Namexians“.3 When Gohan died of old age,4 he left his worldly possessions to Goku; these possessions included a strange yellow sphere…a Dragonball. There are seven of these globes scattered on Earth which are identifiable by the number of stars on it’s [sic] surface (Goku/Gohan’s has four). The legend says that when all seven of them are brought together in one place, a dragon god (Shen Lung) is called from nullspace and the one who possesses them is granted a single wish. With that wish fulfilled, the spheres are once again scattered all over the world. Since these highly magical charms represent a tremendous amount of power in the universe, there are quite a few nasty people who want these for their own ends. One other thing…these are NOT the only Dragonballs in existence; the Namexians have gone to war over their set’s possession on THEIR world.

Goku has been raised far from what passes for civilization, so his mannerisms are those of a country boy. When Bulma meets him tracking Dragonballs on her own, he is not at all sure how to react. Firstly, this is the first human other than his adopted father that he’s ever met. Secondly, this is the first female that he’s ever encountered. Thirdly, she has in her possession a series of rather compact machines that represent a very advanced technology. These machines spring from the “Hoi-Poi” capsules that Bulma’s father is a chief scientist for. It was digging around in a seldom used warehouse that Bulma discovered her first Dragonball, and this started her in search of the others. She is now scouring the world with her “Dragon-Radar” which gives her clues as to the position and quantity of the Dragonballs. Bulma quickly realizes that she could do much worse than to have this guy tag along as he is an incredible fighter. She uses her favorite tactic (she is unusually well endowed…and is aware of the fact. She is also aware of how best to exploit it), but it doesn’t work on Goku. It works on every other male in the universe, however. Bulma doesn’t mind that, either. As long as the fellow in question is a bit attractive, everything is fine.

Dragonball is also a series populated with shapechangers. Oolong, for example, is a Communist pig. Literally. He would be a much better shapechanger were it not for the fact that he was expelled from shapechanging school for stealing his teacher’s underwear. His changes are typically unimaginative and incomplete, and this is the cause of much infighting between him and Puaru. Looking somewhat like a flying cat, Puaru hangs around with a fellow named Yamcha (not a shapeshifter: a compatriot of Goku’s). Like Oolong, Puaru cannot “hold” (her/his?) transformations under any conditions of duress. Also falling loosely into this category is Ranchi, yet she does not consciously transform herself. Under normal conditions, she is a purple haired girl who is pleasant to the point of boredom, but her sneeze is not something that cone wants to see. When this occurs, she turns both blonde and very nasty. In this blonde phase, she’ll produce all sorts of rather lethal weapons and use them to great effect. The reverse also applies: a second sneeze reverts her personality to the first type and she will forget how to employ the weapons that she produced only moments before.

Another significant member of the cast is the wildly attired Kame Sennin (the Turtle sage) who is also known by (his REAL name) Mutenroshi.5 His appearance is that of a bald headed old man wearing a turtle shell and rather loud Hawaiian shorts. Appearances aside, he is one of the most powerful martial artists in the world even now. He is also a dirty old man; he can no longer ride the “Kinton Cloud” which can only be ridden by those pure of heart. Naturally, Goku does just fine with it, and it is this cloud that completes his visage from Chinese literature. Kame Sennin had spent the last fifty years of his life learning the “Kamehameha”; a fighting technique which he now teaches to his pupils.

On the other side of the conflict are a number of rather potent forces by anyones [sic] standards. There is Tsuru Sennin (the Crane Sage) who is in fact Kame Sennin’s older brother;6 both studied under the same master (Mutaito). Tsuru Sennin, unlike his brother, is totally evil. He has no code of ethics whatsoever; his teachings include the precept that one’s opponents are to be injured (or killed) rather than simply defeated in battle. He has the powers of flight, invisibility, and the “Do Don Pa”. His attention could be considered diverted, however: his best student Tenshin Han is now working with his greatest enemy. Tenshin Han, on the other hand, is arguably the most powerful of all Earth’s martial artists being trained first by his old master, and then by Kame Sennin. He was shown the error of his ways by Sennin who gave him victory in a match. Along with the combined techniques of his two masters, he has a third eye which along with seeing the invisible, and is used to train the uniquely destructive “Kikoho” (wind cannon). He can also split himself into four copies, and currently is involved in a relationship with Ranchi.

The real enemies, though, do not come from this world at all; these are Ma7 and his “son” Piccolo (Ma Jr.) Ma is an ancient evil sent from his homeworld of Namex when his people were at war. These people never came to reclaim him, and Ma vented his anger upon the people of Earth. He was imprisoned in a magical container (it looked rather like a rice cooker) by Kame Sennin and his master Mutaito, the strain of which killed Mutaito. Kame Sennin was taught the spell of imprisonment should it ever became [sic] necessary to seal Ma away again…and of course it does. When Ma escaped, he collected the seven dragonballs, and wished for his youth (and power) to be restored. With this accomplished, he destroyed the Dragon God. Goku was eventually able to destroy Ma using a noxious magical liquid (The Mystery Water)8 and his Saiyan heritage (Goku has a seldom seen “berserker” mode in which he is stoppable only by having his tail severed). Ma, in the afterlife, repented his evils and became a force of good on Earth,9 but not before giving life to Piccolo. Piccolo singled Goku out as his father’s murderer, and resolved to stop at nothing to gain revenge. When they finally confronted each other in the ring, their fight was long and bloody. Each side used all the tricks that they had learned, and both fighters were brought to the edge of death. Goku finally won by throwing Piccolo out of the ring, but saw that there was a potential for good in him (like his father). Goku gave him a magical bean (Senzu) which restored him to his former strength (and saved his life). For this reason, Piccolo fights along side of Goku when his brother Ladittsu arrives.

It is a Chinese story, as one can see…at least one with a Chinese feel to it. Even this description does not go into the full breadth of the series with characters like Chaozu, Tao Pai Pai and his (SUPER Do Don Pa) and Kuririn, nor does it really give the feel of the show. This is something that really has to be seen to be appreciated. It’s surely worth the time. 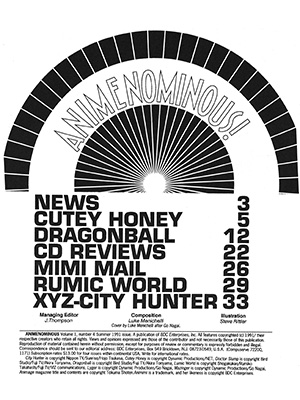 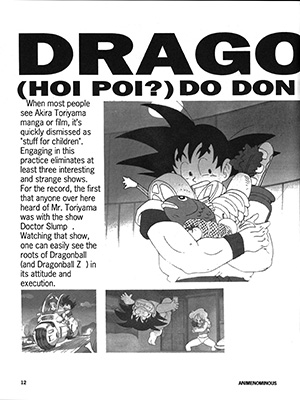 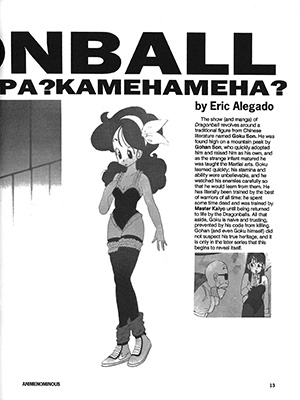 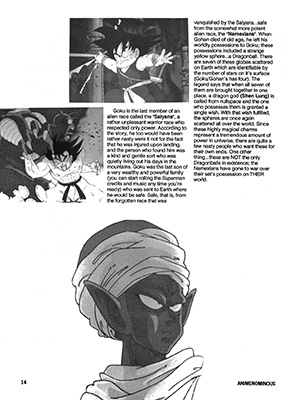 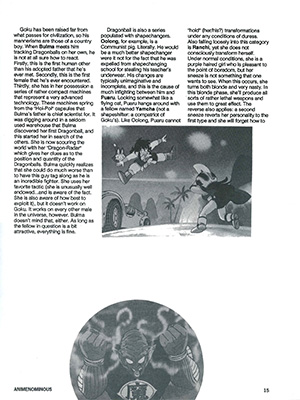 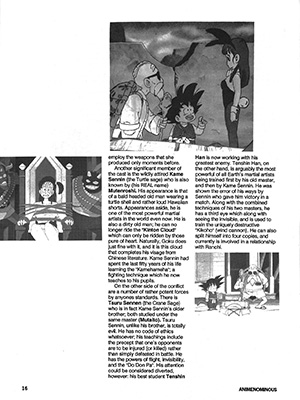 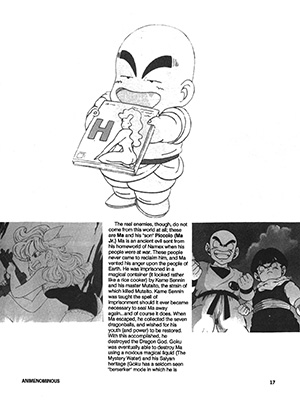 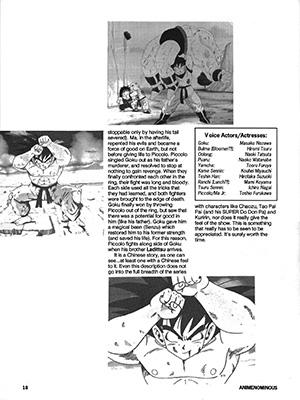 The following historical notes are included for the benefit of the reader as supplemental information and were not originally published in the book.
1 The character’s name is the Japanese reading of the Chinese name 孫悟空 Sūn Wùkōng, the main character of Journey to the West. Interestingly, written in western order here (as opposed to “Son Goku”), as is done with “Gohan Son” later in the article.
2 This… is… totally made up? While the “Dragon Ball Minus” bonus chapter of Jaco the Galactic Patrolman certainly put Bardock in a new light, this was written in 1991, and appears to be a total fabrication/misunderstanding.
3 All things considered, you can see how someone might get “Namex” and “Namexian” from ナメック星人 or namekku-seijin (people of the planet Namekku or “Namek”).
4 Grandpa Gohan was, of course, actually crushed by Goku himself during a Great Ape transformation. This article is written at a point where the Saiyan arc is only just getting going, so perhaps the author had not gotten far enough in to get the reveal, and simply extrapolated information they should not have.
5 Not quite. Just as Kame-sen’nin (“turtle sage”) is a title, so too is Muten-rōshi (“invincible old master”). That being said, the character’s license does appear to say Muten-rōshi…
6 Untrue. Kame-sen’nin and Uranai Baba (the fortunetelling crone) are siblings, and Tsuru-sen’nin and Tao Paipai are siblings, but Kame-sen’nin and Tsuru-sen’nin are not related; rather, the two trained together under Mutaito.
7 The author is likely confused by how the younger Piccolo goes under the name “Ma Junior” (魔 ma meaning “demon”).
8 The author seems to have missed a great deal of information regarding the Super Divine Water…
9 N-… n-no, he didn’t… huh?!
Transcription & Notes: VegettoEX
« Previous Page
Press Archive