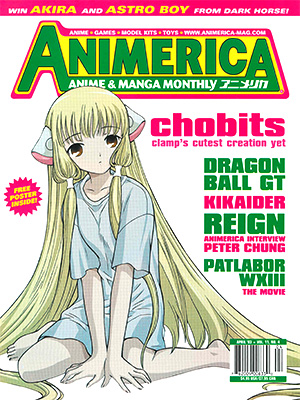 While American TV censors might have had problems with Goku’s bare behind in Dragon Ball or some of the violence of Dragon Ball Z, neither show is as controversial as Dragon Ball GT. Yes, it has creative battle scenes and a tad of nudity like its predecessors, but what makes GT controversial is that the creator was barely involved. Some fans love it; some fans hate it. Either way, Dragon Ball GT is the last Dragon Ball animation.

Akira Toriyama’s phenomenally popular manga series Dragon Ball ended after more than a decade-long run, in Japan in May 1995. In Japan, the entire series is just called “Dragon Ball”; in the U.S., the manga series has been divided into Dragon Ball and Dragon Ball Z, to roughly match the anime series. The Dragon Ball Z TV series ended shortly after the manga, in January 1996. In both cases, the ending of the series followed the conclusion of the Buu saga, taking a brief ten-year hop into the future to show how the cast was getting along. This was enough for Akira Toriyama, but not for Toei Animation. With some illustrations and character sketches from Akira Toriyama to point the way, the animation staff created a new series, one not based on Toriyama’s comic. The result was Dragon Ball GT.

Beginning in Japan a week after the end of the Dragon Ball Z TV series, Dragon Ball GT takes the story six years1 further into the future. Pilaf drags his geriatric lackeys on another dragon ball hunt, one that leads to Kami-sama’s Palace. There, he uncovers the more powerful black-star dragon balls, dragon balls created by the original Namekian who existed prior to the split into Piccolo and Kami-sama. Before Pilaf can ask his wish, Goku stumbles across the scene–Goku who always ruins his schemes! Pilaf begins to rant, “If only you were a kid again, then I’d…” And his wish is granted!

The team the heroes settle on is Goku, Goten and Trunks–the boys have gotten too soft and need the exercise–but things don’t go as planned. Intent on proving she’s not a kid, Goku’s granddaughter Pan (the child of Gohan and Videl) stows away onboard Bulma’s spaceship and launches it with only Goku and Trunks onboard. There’s no turning back. Ah, well.

This first part of the series is a lot of fun with an amusing quest that hearkens back to the early days of Dragon Ball, with stories such as Trunks having to pretend to be a girl to beat an amorous monster. After fifteen episodes of adventure, the series changes, gravitating toward the sort of battle-oriented, power-escalating story Dragon Ball Z fans are more familiar with.

One of their adventures proves the catalyst for the second story arc. The evil invention of alien scientist Dr. Myuu, a creature named Baby hitches a ride back to Earth where its mind-control abilities wreak havoc. This provides a great excuse for the heroes to fight each other. During the course of this story, Goku learns to reach Super Saiyan 4.

The third story arc brings the return of some old enemies. In Hell, Dr. Gero, of cyborg fame, works together with Dr. Myuu to create a New Android #17, one that isn’t so annoyingly disobedient. Using the resonance between #17 and his duplicate, the evil doctors merge them to create the Earth-threatening, Goku-hating Super Android #17.

The final story begins when the heroes try to use the regular dragon balls to fix the problems caused by the previous story. Instead of the cool, green Shenlong dragon that fans have come to know, the cracked dragon balls release a smirking, cigar-puffing blue dragon that sucks the dragon balls up and spits them out, creating seven new dragons. The heroes are reminded by Kaiôshin-sama that the dragon balls are only supposed to be used about once every hundred years. Because they have been used so many times in the last thirty years, “minus energy” has built up, resulting in the evil dragon. Ah, well. It’s up to the heroes to defeat the evil dragon’s minions and get things back to normal.

Some humor, a little adventure, a lot of fighting, cool new skills and transformations, nearly every character gets some time in the spotlight–as far as action-adventure series go, Dragon Ball GT is a pretty good show. Plus, the ending of Dragon Ball GT is fairly profound and emotional, offering a feeling of finality that Dragon Ball Z‘s open ending does not provide. In many ways this is to be expected, for the people in charge of Dragon Ball GT are the same people who brought the rest of Akira Toriyama’s comic to animation. Most of the animation staff–such as planning director Kôzô Morishita and production chief Yûichi Suenaga–had worked on the series nearly as long as its creator had. With so many years of creative effort already invested, you wouldn’t want to end on a flat note. Airing its sixty-fourth and final episode in Japan on 19 November 1997, Dragon Ball GT is anything but flat.

This is one of those things that doesn’t make a lot of sense based on earlier “rules” of Dragon Ball. The gold Ôzaru (“Great Ape” in the comic) is a step between Super Saiyan 3 and Super Saiyan 4. Aside from no other level of Super Saiyan requiring an in-between step, one of the implied requirements of becoming a Super Saiyan is losing your tail and your reliance on its strength. Also, Rôkaiôshin-sama was opposed to the innate violence of the Super Saiyan transformation, yet he’s the one who helps Goku achieve Super Saiyan 4 by pulling out a new tail from Goku’s backside! Ultimately, the “rules” of the Dragon Ball universe have proven flexible before. Does it really matter if it doesn’t make complete sense? After all, it’s a really cool transformation!

Airing 26 March 1997, the one-hour Dragon Ball GT special takes the story 100 years into the future. The special is primarily an adventure of Pan’s grandson1 Goku, Jr., who is the spitting image of his namesake. For fans who have problems with the questionable continuity between Dragon Ball GT and the rest of the series, this special will drive them crazy.

Arguably, Dragon Ball GT has the best music of any Dragon Ball show. Although the series only ran 64 episodes, it had four different ending themes and a top-of-the-charts opening. The mainstream, pop-music quality of the tunes makes them stand out from most other Dragon Ball songs.

The only Japanese books published about Dragon Ball GT are the two Dragon Ball GT Perfect Files released by Shueisha in 1997. Despite the first page of stickers suggesting publications for younger fans, there is a fair amount of detailed information in this thin pair of tomes.

Despite possessing the power and fighting prowess to compete in the Tenka-ichi Budôkai at the age of four, Pan never seems to be able to turn Super Saiyan. Think at one-quarter-Saiyan, her blood’s too human? If so, her grandson wouldn’t be able to turn Super Saiyan in the TV special. Not even the half-blooded Bra turns Super Saiyan, though she doesn’t seem to martially inclined. The Dragon Ball GT Perfect File suggests both Pan and Bra probably could transform in the direst of circumstances. Yet it wasn’t so difficult for Goten and Trunks to transform as kids. And weren’t the Earth-threatening events of Dragon Ball GT dire enough?

Goku
Finally finished with Uub’s training, when Goku gets wished into a kid and can’t be turned back, all he has to say is, “Ah, well.”

Pan
Pan has her parents’ strength and sense of justice. Intent on proving she’s not a little kid anymore, she stows away on the spaceship. Self-proclaimed star of the show, it isn’t long before she takes a back seat.

Trunks
A reluctant Capsule Corporation executive, Trunks is equally reluctant to go into space for the black-star dragon balls.

Giru
This dragon radar gulping little robot becomes the fourth crewmember and is essential in the galactic search for the black-star dragon balls.

Vegeta
After a derisive comment from his daughter, Vegeta looses [sic] the mustache. He gets a decent workout once the plot returns to Earth.

Bulma
Thank goodness Bulma was working on a spaceship! Her technical abilities are vital to several parts of the plot.

Bra
Bulma and Vegeta’s second child, Bra loves shopping and her daddy, but if she has any serious martial skills, they aren’t used in this series.

Gohan and Videl
Two bodies, one mind and heart. Proud parents of Pan, they aren’t vital to the plot.

Goten
Goku’s youngest is more concerned about dating than saving the world. He lucks out of going into space for the black-star dragon balls.

Chichi
It’s bad enough humans age faster than Saiyans, but having her often-absent husband turned into a child is ridiculous!

Uub
Trained to be Earth’s defender, Uub plays a surprisingly small part in the series.

Piccolo
Eternally cool, Piccolo doesn’t see much action, and his fans probably won’t like this series much.

Krillin, #18 and Marron
This family doesn’t become too involved until the Super Android #17 story arc.

Dende and Mr. Popo
Despite his hasty appointment to the job in Dragon Ball Z, Dende’s still at work as Kami-sama with wise Mr. Popo’s help.

Mr. Satan
Still a star after all these years; Mr. Satan adores his granddaughter Pan.

Android #17
Living alone in the wilderness, Android #17 hasn’t developed the emotional bonds that allow his sister to resist the evil resonance to join with New Android #17.

Kaiô-sama
He serves as a convenient font of information.

Kaiôshin-sama and Rôkaiôshin-sama
They help Goku in his struggle to reach Super Saiyan 4.

Pilaf and His Minions
These geriatric villains finally succeed in getting a wish out of the dragon balls…sort of. Their discovery of the black-star dragon balls is the catalyst for this series.

Baby
A masterpiece of machine mutant technology, Baby has the super-creepy ability to merge with and control living hosts. Once he gets to Earth, he causes serious trouble.

Dr. Myu
This maniacal, mechanized mad scientist is responsible for creating Baby. After being killed by his creation, Dr. Myuu works in Hell with Dr. Gero to create New Android #17 and the Super Android #17 plot.

Super Android #17
When Android #17 and New Android #17 merge, the result is this perfect combination of cyborg and machine mutant technology, the ultimate fighting machine. Controlled by the evil and vengeful Dr. Myuu and Dr. Gero, the question is can anyone stop him? 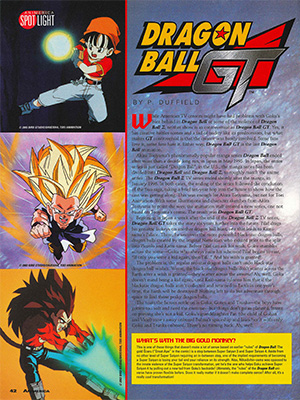 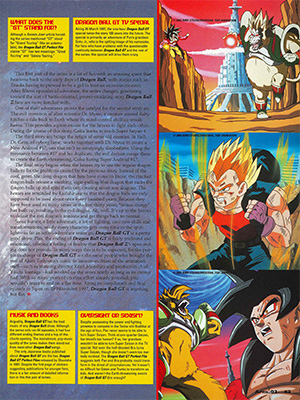 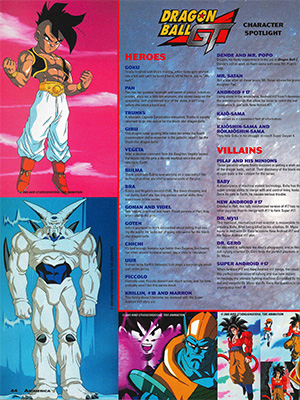 The following historical notes are included for the benefit of the reader as supplemental information and were not originally published in the book.
1 The Dragon Ball GT: Perfect File books place Dragon Ball GT as beginning in Age 789, which would therefore be five years after the end of the manga.
2 Goku Jr. is actually Pan’s great-great-grandson.
Transcription & Notes: VegettoEX
« Previous Page
Press Archive