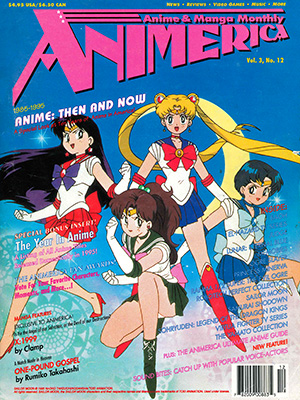 Anime Then… And Now!

Ten years ago, if there was anime to be found in this country, it was on television, the few shows available often broadcast during unusual hours. Those of us who caught the anime bug during those times found ourselves getting up at the wee hours of the morning or rushing home from school in the afternoon in order to tune in that wavery, alien signal from a place that seems so far removed from the ordinary cartoon and children’s fare available in the United States–the endless sitcoms and adventures where everything always came out all right and America was always on top. Life was already teaching us that this message was stunted, and anime, in the form of ROBOTECH, STAR BLAZERS, VOLTRON, BATTLE OF THE PLANETS and other shows that came and went quickly, almost fast enough to be fever dreams, was a different quantity, unafraid of the sorts of subjects that terrified parents’ groups. Anime was unafraid to show actual war as a thing with casualties and costs–something to be avoided. It was unafraid to acknowledge the idea of grown-up relationships, lost friendships, betrayal, regret or grief…and even death itself–things seldom addressed in children’s programming in America under the innocent belief that if such uncomfortable subjects are kept away from children, they may never in their lives have to deal with them. For those of us who remember when, anime was real joy, real experience, and at times a lifeline from an unreal, but somehow sane world where life was something that had to be confronted rather than something to hide away from.

For those of us who became fans then, anime had to be searched out–there were no commercial outlets selling tapes, and one had to find other fans through newsletters and sci-fi conventions. Friends gathered to watch the maybe one new tape someone had managed to acquire from a friendly source. The precious tape may have passed through dozens of hands before it reached some fan’s U.S. living room, where a group of viewers would sit raptly through showings of nth-generation tapes from Japanese television and did their best to make sense of complicated science fiction plotlines with little or no translation, and a flickering, uncertain image. Theories were formed about what was happening in the stories, fan APAs were traded briskly back and forth as fans compared their ideas. Characters from popular shows became icons, our heroes, our alter egos. Everyone wished for a day when anime was easier to find and to get, when it would be understandable to those who wanted to understand its messages. Now that day has arrived, to an extent. Anime can be found in video stores and retail outlets, translated and reasonably priced. Has it became less special because it can be found anywhere, or have we just forgotten what it used to be like, when anime was like a treasure one had to quest for, fight for? Was it worth it?

After a long absence, anime has finally made its return to television…and it still seems to broadcast at those same strange, inconvenient hours1. We can now set the VCR for those odd hours, our robotic servant taking notes while we are away, but those flickering TV images, of SAILOR MOON, of DRAGON BALL, of RONIN WARRIORS, provide that same sense of the old days. Suddenly there are new worlds to be explored, something new happening that all our friends can see, something we can all talk about, and compare notes about, and enjoy with a shiny new glee of discovery.

It’s still worth it.

I began studying Japanese because of a passion for James Clavell’s SHOGUN, but it was Leiji Matsumoto’s UCHU KAIZOKU CAPTAIN HARLOCK (“Space Pirate Captain Harlock”) which gave me the motivation to needed to eventually finish an undergraduate degree in the language. I’d watched the Roger Corman dub of GE 999 on cable (“See ya in the Sea of Stars, Joey”) and the Matsumoto-animated STAR BLAZERS on KTVY’s “Captain Cosmic and His Wonder Robot 2T2,” so when Harlock-sama made his whip-thin, one-eyed way into my life in the form of Hawaii-subtitled off-the-air TV episodes,2 I was ready for him.

Today, with anime on TV and LD Box Sets available for import and the 1000+ or so videos now available commercially in the U.S., the need for those tapes has vanished, but still, it’s important to remind one’s self now and again of how things used to be in those oft-mentioned “Good Ol’ Days.”

It’s all become so clean and hygenic, so sanitized for our protection. Gone are the wild ‘n’ wooly anything-goes days of the anime frontier, when robber barons sat Smaug-like upon their hoards of “from a friend” tapes, parceling them out like laudanum during wartime, making the anime-starved to kiss their fly-specked rings; gone, too, are the days when theories were a dime a dozen, and we all engaged in the illicit thrill of swapping speculations on just what was going on in those post-apocalyptic Nietzshean existentialism kung-fu-videos. FIST OF THE NORTH STAR is on home video now, and so we all duly grok the profundity of man’s inhumanity to man in Kenshiro’s angst-ridden “WA-TAAH!,” but are we happier? Yes and no.

Today, you can turn on your TV and watch SAILOR MOON, or DRAGON BALL, or TEKNOMAN, or RONIN WARRIORS, all in the comfort of your own home. To some, perhaps, they lack the zip of the straight hope, but hey! for a couple minutes of your time watching commercials, they’re all yours. No one’s going around in Japan with a magnet erasing the import stuff, after all–you’re still just as welcome to drop a couple grand on the import LDs as you always were.

There was a time when to be an anime fan, you needed to have a connection, a pimp, a pipeline special friend–you had to know somebody. Nowadays, you can walk into any Blockbuster in the country and get your fix for ≥ SRP$34.95. I call that progress.

EVERYBODY WAS KUNG-FU FIGHTING…

Though an evergreen hit in Asian markets worldwide, DRAGON BALL was long considered too difficult to import to the U.S. because of its continual violence, casual nudity, and distinctly ethnic source material with its traditional “Monkey King” legend of China foundation. But in an era of John Woo’s HARD BOILED and THE TEENAGE MUTANT NINJA TURTLES, neither the violence nor the cultural slant raises anywhere near the same eyebrows it would have ten years ago, and with a simple technological wave of digital retouching, the frequently occurring nudity is now reduced to merely a troublesome detail, rather than a frustrating impasse. DRAGON BALL, like SAILOR MOON, is a hopeful sign that more anime on TV is the wave of the future. 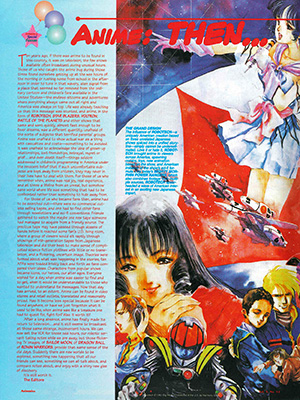 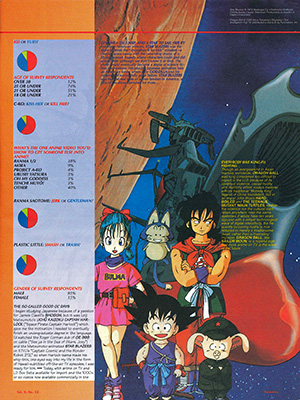 The following historical notes are included for the benefit of the reader as supplemental information and were not originally published in the book.
1 Indeed, the original syndication broadcast of Dragon Ball was often somewhere around the 5:00-6:00 a.m. time slot for many folks, and would only marginally improve over the next two seasons with Dragon Ball Z. It would not be until 1998 and the show hitting Cartoon Network’s “Toonami” block that the Dragon Ball franchise secured a regular after-school time slot.
2 Likely Nippon Golden Network (“NGN”), a television channel that also aired the entirety of Dragon Ball and roughly 100 episodes of Dragon Ball Z in a similar fashion prior to FUNimation’s license of the series.
3 Trish Ledoux later went on to become the first editor on the Dragon Ball English translation from Viz beginning in 1998.
Transcription & Notes: VegettoEX
« Previous Page
Press Archive