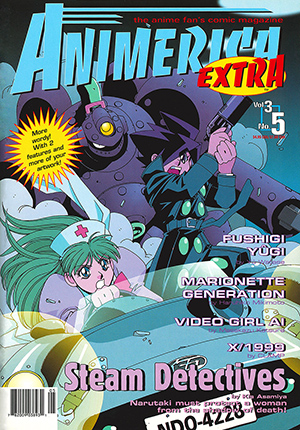 A look at one of Japan’s most popular manga…

After the end of Dragon Ball in 1995, Akira Toriyama was free to write stories of his own choosing, at his own pace. One of these new stories is Kajika. This single volume action/comedy revolves around the title character, Kajika, a foxboy on a quest to become human.

The story begins with Kajika making a daring and dynamic effort to rescue… a lizard! Kajika is quite pleased with himself. He reminds his ghostly companion, Gigi, that finally, after five long years, he has only ten more lives to save to become human again. As they make their way to a nearby town, Kajika hears something that sounds like trouble. When he and Gigi investigate, they spy a young woman being surrounded by a gang of thugs. “Why don’t you just give it back? Surely you don’t want to die so young?” suggests the head gangster. Although she has only a sword against their guns, the woman takes out two of the baddies. The others open fire, and their leader scolds them for putting “the egg” at risk. Unsheathing his sword, the gangster leader challenges her, and she takes him on. When her sword breaks, Kajika decides to enter the scene.

After a dramatic leap (he lands on his face), Kajika dusts himself off and takes care of the rest of the badguys. He removes the villainy (black blobby things that come out of their mouths) from the thugs, after which the leader gathers his men and politely leaves. It is only then that Kajika discovers the young woman is a thief!

The woman, Haya, reveals that her necklace contains a dragon’s egg. The dragons of Ronron Island were thought to be extinct when a great storm killed the last two adults, but later, this one egg was found. Gibachi, the boss of the gangsters, took the egg from the island’s research institute. Determined to put it back where it belongs, Haya stole the egg from Gibachi. Haya thanks Kajika for saving her and asks him to help her return the egg to its island home. Kajika is dead set against assisting a thief, but Gigi thinks it might be a good idea. With that settled, Haya asks what Kajika meant when he told the gangsters he wasn’t a dog-boy but was cursed to be a fox. Gigi explains…

Kajika was a horrible brat as a child. He did many awful things just for the heck of it. One day he killed a fox (Gigi), whose spirit now accompanies Kajika and has cursed him to an inhuman existence. In an attempt to teach Kajika the value of life, Gigi gave him one chance to return to human form: he must save 1000 lives and take none.

Once the situation of our hero is explained, the story turns its focus to the plot revolving around the dragon’s egg. We learn that the reason Gibachi wants the egg is because, according to legend, if you drink the blood of a baby dragon, you’ll gain tremendous power. There are more interesting and amusing characters to meet as well as a number of unexpected surprises along the way.

First published in January of 1999, this Jump Comics tankôbon (“graphic novel”) is still regularly stocked in many Japanese bookstores around the U.S. Toriyama’s writing and comic style make the story especially easy to follow, and it’s a good comic for people who want to develop their Japanese skills, but don’t want to commit to a lengthy series. Besides that, the fact that Toriyama is a master of action makes this comic worth a look. With great art, and plenty of action, comedy, and unique personalities, Kajika is a highly entertaining adventure story. 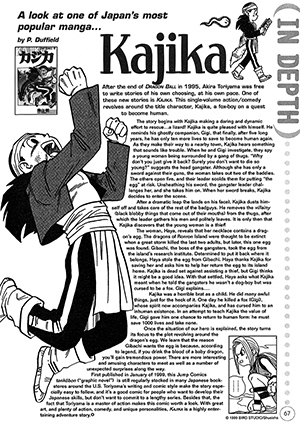 The following historical notes are included for the benefit of the reader as supplemental information and were not originally published in the book.
1 This article is also reprinted, presumably in its original draft form untouched by the magazine’s editor, on Patricia Duffield’s personal website. The version presented here on Kanzenshuu‘s “Press Archive” is that as presented in the magazine, which includes minor phrasing and punctuation adjustments. Duffield’s website lists the article as being from April 2000; this is the magazine’s actual release window, rather than cover date (Volume 3, Issue 5 corresponding to May 2000).
Transcription & Notes: VegettoEX
« Previous Page
Press Archive