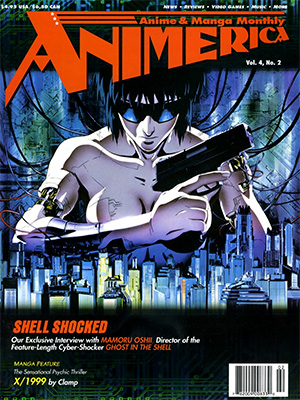 On the American Broadcast of Sailor Moon and Dragon Ball

As manager of MANGA NO MORI (“Comics Forest”), the largest comic/anime merchandise specialty chain in Japan, Takashi Oshiguchi has been involved in the industry not only as a retailer but as a journalist for more years than he can count. In addition to his many articles, Soshiguchi writes occasionally for ANIMAGE magazine and has had his own column in the comic trade journal COMIC BOX.

It probably isn’t too much to say that SAILOR MOON and DRAGON BALL are two of the biggest hits of all animated children’s shows in Japan. They are socially recognized, and any Japanese knows about the shows. But what most Japanese don’t know is that these two shows are being broadcast in the United States.

While animation industry people and animation magazines mention that they’ve heard rumors about it, as for the mainstream media in Japan, they don’t mention it at all. The mainstream Japanese media has featured stories of Japanese animation being broadcast in Europe and Southeast Asia so many times it’s a matter-of-fact phenomenon now. So there’s no novelty seen in an American broadcast.

But actually, if the media only realized that it is in fact an unusual event that Japanese animation is being broadcast in the U.S., they might show more interest, but the Japanese media aren’t that interested in animation in the first place. Japanese anime fans, although, have more hardcore questions on the subject such as how SAILOR MOON‘s transformation scenes with their suggestions of nudity are taken care of in the restrictive American broadcast, or how the American versions are handling the uniquely Japanese characters without causing misunderstanding, or if the American voices fit the characters. Other fans worry if the uniquely Japanese characters of DRAGON BALL will be accepted in the U.S., or if the violence in the abundant fight scenes will raise negative publicity.

In the end, the American broadcast of these shows raises only these hardcore fans’ interest. That’s because although these shows are hits, their popularity is really that of the past. The long-running DRAGON BALL manga ended last fall, and the TV show may soon follow.1 SAILOR MOON‘s manga is still running, but it’s already seen its heyday.

I may have said this before, but in Japan, animated TV shows change titles every year, and fan interests change rapidly with them. Especially now that broadcast cycles have changed from a yearly schedule to a half-year schedule, this attitude is even more prominent. Most anime fans in Japan don’t have the attention to spare to retain interest for past shows. (I digress, but I’ve personally lost interest in the former talk of the show, the TENCHI MUYO series already. Currently, my interest would be in EVANGELION.)

I already knew early last year about the American broadcast of SAILOR MOON and DRAGON BALL and wrote about it, but there was little interest for the subject in my immediate circle. This lack of excitement reaffirmed my view that Japan quickly loses interest in past titles. If there is to be any Japanese interest on this matter, it would only be in reaction to the American media like CBS or CNN showing interest in the subject. See you next month, from the forest. 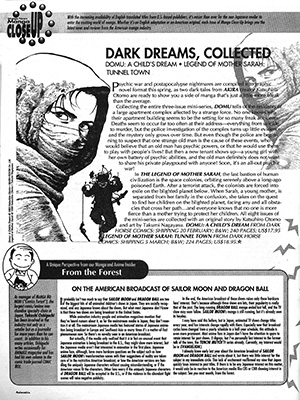 The following historical notes are included for the benefit of the reader as supplemental information and were not originally published in the book.
1 With this being the February 1996 issue, the lead time for the article’s author was presumably well ahead of the printed date. The Dragon Ball Z television series indeed came to an end 31 January 1996 after 291 episodes, roughly in line with when readers would have been picking up this issue. Of course, Toei continued onward with Dragon Ball GT immediately afterward…
Transcription & Notes: VegettoEX
« Previous Page
Press Archive